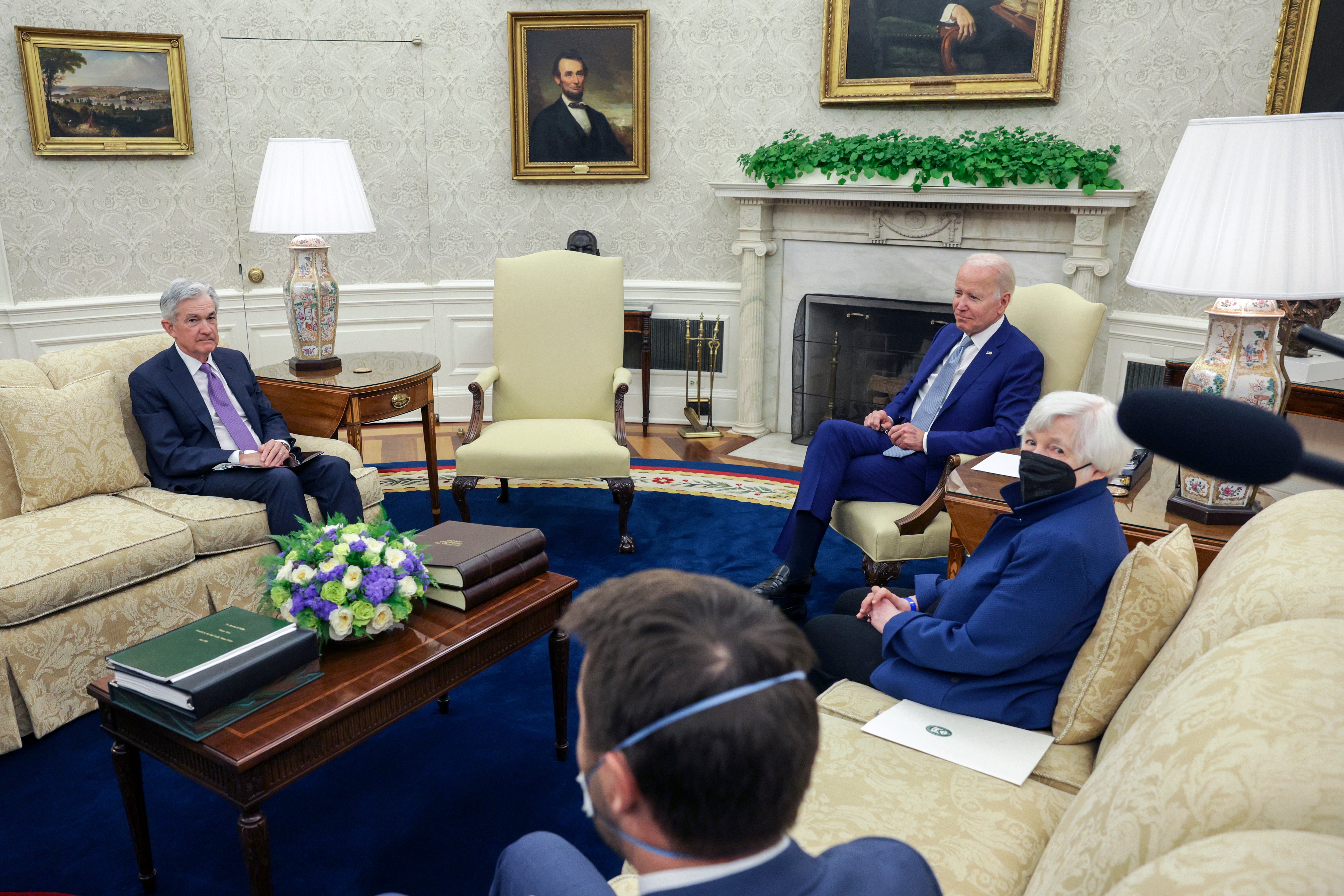 Queen Elizabeth: How 70 years of portraits have made her an icon

President Biden, mounting a media campaign to broadcast his concern about inflation, is said to be frustrated by his team’s handling of the issue that could decimate his party in November.

But after his administration kept clinging to the notion that rising prices were temporary, he has few tools to employ beyond empathy.

Once he rolled out the little-seen Treasury secretary, Janet Yellin–who told CNN “I think I was wrong then about the path that inflation would take”–it was time to turn the page.

An Oval Office photo op with Yellen and Fed chair Jerome Powell isn’t going to change many minds. Plus, the president’s message was mixed. “My plan to address inflation starts with a simple proposition–respect the Fed, respect the Fed’s independence.”

Well, Biden doesn’t have any choice, since the Federal Reserve is an independent agency, even if he was trying to draw a contrast with Donald Trump’s public hectoring of the Fed. Besides, it’s the Fed’s job to manage the money supply without letting inflation spiral out of control, and on that score, it’s been a failure. The blame-Putin rejoinder also seems to have been jettisoned.

Biden also wrote a Wall Street Journal op-ed on inflation that barely made a ripple because it contained nothing new. He also had top officials make the cable news rounds to talk about the economy.

“The flurry of activity,” says the Washington Post, “comes after Biden has privately grumbled to top White House officials over the administration’s handling of inflation, expressing frustration over the past several months that aides were not doing enough to confront the problem directly.”

But between Ukraine, coronavirus and gas prices surging during the summer driving season, “there may be little Biden can do about it.”

Politico sees “a vicious blame game” between the White House and corporate leaders, especially with the stock market slide.

“Some top executives, especially in the banking sector, are now complaining that while Biden pays lip service to caring about their views on how to fix things, he doesn’t actually listen to them or solicit their input.”

U.S. Treasury Secretary Janet Yellen on Thursday said she was wrong about the path of inflation after months of downplaying the issue.
(Alex Wong/Getty Images)

Wow! This German Pineapple-Slicing Machine Will Mesmerise You

WHY THE WHITE HOUSE CONTRADICTS BIDEN OVER HIS STAND ON TAIWAN

There are always tensions between Wall Street and Democratic presidents, especially when this one inveighs against excess profits and for raising corporate taxes.

The corrosive thing about inflation is that it hurts just about everyone. When you’re paying more for beef and chicken, or spending 70 or 80 bucks to fill up your car, you feel like that money is being taken out of your pocket. Biden, with his working-class roots, knows this all too well.

SUBSCRIBE TO HOWIE’S MEDIA BUZZMETER PODCAST, A RIFF ON THE DAY’S HOTTEST STORIES

Now the president can make the case that he’s created a record number of jobs, that the economy is humming for those with solid employment, but nobody wants to hear that. Had the administration poured less money into the economy after the pandemic hit, inflation would be lower, but more folks would be out of work. That was the choice, but it left us with the scourge of 8 percent inflation.

President Joe Biden’s plan to forgive $10,000 in student loans per borrower was slammed by the Washington Post editorial board.
(AP Photo/Evan Vucci)

No wonder Biden is frustrated. His claim that soaring prices were “transitory” turned out to be way off the mark, and for that, he’s likely to pay a high political price.

From Stress to Lack of Physical Activity, Possible Reasons For Insomnia

Author Shrayana Bhattacharya On Shah Rukh Khan: SRK Is A Female Icon But Not A Feminist Icon | Exclusive

North Dakota voters to decide on term limits for governors, legislators in midterms

TerraUSD collapse will ‘probably be the end’ of most algorithmic stablecoins, crypto exec says

Queen Elizabeth: How 70 years of portraits have made her an icon