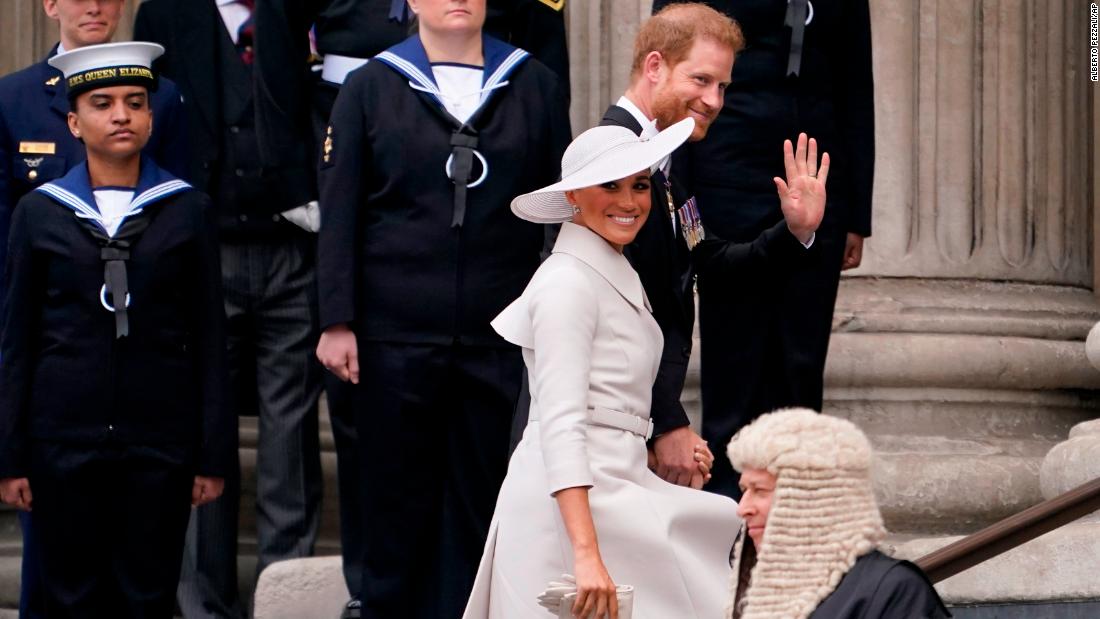 This wasn’t just their first public appearance as a couple at a royal event in more than two years, it was a major state event — a thanksgiving for the Queen’s unprecedented reign in the hallowed surroundings of St Paul’s Cathedral.

Inside, they made their way down the long aisle, heads turning as they went along and the television cameras locked in on them to an almost uncomfortable extent.

What we don’t know yet is whether the couple had any private meetings with Prince Charles and Prince William to resolve outstanding differences.

Ahead of the event, there had been plenty of speculation in the British press over how the couple would be received. But they’ve taken a low-key approach to their jubilee attendance which may play in their favor.

On Thursday they didn’t appear in front of the cameras at all. They watched the Trooping the Colour military display from a window overlooking Horse Guards Parade. Were it not for confirmation of the pair’s attendance and eagle-eyed photographers with their long-lens cameras capturing grainy snaps, they might have slipped completely under the radar.

This was clearly a visit rooted in reverence for the Queen and her historic reign. If their strategy was to avoid overshadowing the 96-year-old’s milestone moment, it worked and may have gone some way to start healing that rift.

“There was this huge roar when the Sussexes arrived, real popularity. People were really thrilled to see them. There was this real closeness — the family was together,” CNN royal historian Kate Williams said. “There’s been a lot of negative press about Meghan and Harry and it’s time to look past that and see that they were there to support the Queen.”

She continued: “As the Queen said in her statement when Meghan and Harry left the royal family, left as full-time royals, she said they are ‘much loved’ members of our family and that was very clear today.”

Emily Nash, CNN royal contributor and royal editor for Hello! magazine, said it was “huge” to see the Sussexes back in the royal fold.

“Not least because it sends out a signal that the family is united behind the Queen and they are prepared to put whatever has happened behind the scenes behind them,” she explained. “Whether by accident or by design, chances are relationships are going to thaw. They’re going to be able to spend some time together. Hopefully, that is going to build bridges again.”

“But there is a lot contingent on this. We have Harry’s book coming out at some point, we have the Netflix documentary — there are all things that are going to cause concern to the royal family,” she added. “Whether or not, behind the scenes, these are things that are being discussed remains to be seen. But I think the very fact that they are here obviously is a cause of great pleasure for the Queen.”

It’s unclear at this point if we’ll see the Sussexes again over the weekend. We’re finding out day-to-day about their presence at the celebrations. But so far it looks like there has been some healing. Such a rebalance in the public face of the family would have been welcomed as a gift by the Queen on her landmark weekend.

WHAT WE KNOW ABOUT THE QUEEN’S HEALTH

The Queen’s absence at her own service of thanksgiving has inevitably sparked questions about the 96-year-old’s health again.

In years past, the monarch rarely scrapped engagements at the last minute. But her advanced age has made it difficult to work the jam-packed schedule, filled with official commitments and appointments, that has defined the majority of her reign.

As she gets older, the Queen has reduced her number of events to focus on core constitutional duties but she’s even being forced to reduce that. Prince Charles had to represent her at the State Opening of Parliament this year.

The palace has given no reason to think the Queen is in poor health. However, her age and the fact that she is the world’s most recognizable woman often fuel speculation when something is amiss with the British sovereign. The palace has tried to strike a balance between being truthful while preventing people from becoming overly concerned. Read more.

PHOTO OF THE WEEK

Every parent knows this little face from their own kids. The first day of jubilee celebrations appeared to be a soaring success, capped with a fabulous flypast over Buckingham Palace. Despite a beaming monarch in blue appearing on the palace’s balcony, it was her 4-year-old great-grandson, Prince Louis, who stole the show. The youngest child of the Duke and Duchess of Cambridge was pictured happily chatting away with the family matriarch as she pointed out the aircraft, before placing his hands over his ears as 70 aircraft flying overhead proved a little overwhelming.

From young princess to long-serving Queen, the British monarch’s appearances over the years have made for some of her most memorable moments. Join us for a trip down memory lane as we look at the Queen and her very royal wave.

WHAT ELSE IS HAPPENING?

An opulent 260-year-old gilded carriage is hitting the streets for the first time in two decades to take center stage in Sunday’s Platinum Jubilee pageant. The Gold State Coach, which first transported a young Queen Elizabeth II from Buckingham Palace to Westminster Abbey on her coronation day in 1953, will lead a spectacular procession on the streets of London as part of the pageant. Adorned with ornate sculptures of cherubs and tritons as a show of national unity and strength, and featuring panel paintings, the eye-catching coach is a moving work of art. Inside, it’s equally detailed and upholstered with velvet and satin. The Queen herself will not be on board during the pageant. But archival footage of her waving from the carriage on the day she was crowned will be projected onto its windows. Read the full story.

The Duke and Duchess of Sussex renewed the lease on their home at Frogmore Cottage in Windsor, outside London, a royal source confirmed earlier this week. The couple and their children are staying at the property while in the UK for the jubilee. Harry and Meghan lived at the property prior to relocating to the US in 2020 and this latest move has raised questions among royal-watchers over whether the family may spend more time on this side of the pond.

A towering sculpture erected outside Buckingham Palace in London as part of the celebrations is raising a few eyebrows. Designed by British “starchitect” Thomas Heatherwick as the principal Platinum Jubilee beacon, “Tree of Trees” is made of hundreds of indigenous British species ranging from hazel to field maple trees — each planted in aluminum pots decorated with the Queen’s cypher. But the sculpture has been divisive on social media since its unveiling last week. One user wrote that the design was “absolutely beautiful,” while another likened it to resembling a “cell phone tower.” Read more on this story.

TRIBUTES AROUND THE WORLD

The Queen’s historic reign is also being commemorated in countries around the world, with Britain’s Foreign, Commonwealth and Development Office (FCDO) spearheading a host of international events.

France’s President Emmanuel Macron led a ceremony of thanksgiving and recognition for the Queen at the Arc de Triomphe on Thursday, supported by a band from the Royal Regiment of Scotland.

On Saturday, the Red Arrows will stage a flypast at Le Touquet-Paris-Plage on the northern coast at the English Channel, while the British Embassy in Paris is exhibiting a collection of portraits measuring almost 10 feet tall of the Queen at the ambassador’s residence, including a 1953 Cecil Beaton Coronation portrait and a David Bailey portrait from 2014.

British Embassy staff in Switzerland have been working with famous light artist Gerry Hofstetter to project a Platinum Jubilee display onto four Bernese Alps mountains, including the 13,015 feet high Eiger.

Beacons have also been lit in the Commonwealth capital cities — 54 in total.

FCDO staff based in the US are hosting a series of celebratory events in Washington, New York, Chicago, Houston, San Francisco, Boston, Miami, Atlanta, Los Angeles and Minneapolis.

The Queen’s been photographed, painted and graffitied. She’s been struck on coins, cast in iron, silk-screened onto T-shirts and fired onto plates. There’s even a Barbie doll in her likeness.

Her reign has seen the proliferation of color photography, the commercialization of television and the pervasiveness of the internet on screens big and small.

CNN looks at the official and unofficial, classic and controversial images that turned Queen Elizabeth II into the cultural icon she is today. Head here to see our full interactive on the most recognizable face in history.

To mark the Queen’s unprecedented anniversary of seven decades on the throne, CNN deployed journalists and photographers to the streets of London as part of our coverage.

Bernadette Tuazon, CNN’s director of photography, was tasked with getting a shot of the monarch herself on the balcony, which required getting to the platform in the early hours of Thursday and waiting there until the Queen emerged. She told Royal News: “My team woke up early Thursday to be on site by before 5 a.m. We had about eight super heavy, large hard cases of cameras, lenses, cables, tripods, step ladders, laptops and sandbags … The entire setup took about an hour and a half, but the waiting was for another five hours.”

On photographing the Queen on the balcony, she added: “I was able to just observe her body language very closely. She looked at the crowd, then Prince Charles would whisper something to her and she would nod. Then she would interact with the kids, and I could see she was trying to point the planes to them.”

Meanwhile, CNN Photo Editor Toby Hancock was down on The Mall among the crowds, where he was able to soak up the party atmosphere.

“It was great to feel their passion and excitement at the pageantry and celebration and to get an insight into just how much they loved the royals,” he said. “They were delighted to see all the pomp and ceremony and when Catherine and the kids came by — that was the cherry on the jubilee cake for these fans.”

Check out more of Bernadette and Toby’s photos and others of the jubilee so far here.

“I continue to be inspired by the goodwill shown to me, and hope that the coming days will provide an opportunity to reflect on all that has been achieved during the last 70 years, as we look to the future with confidence and enthusiasm.”

Heads up Royal News readers: We want to make sure you have all the details from this bumper weekend so we’ll be sending a special jubilee edition on Monday to wrap up the weekend’s festivities. But don’t worry, we don’t want to overload your inbox with unnecessary mail and will return to our regular Friday sends next week.

Photos: Meet the people in the Queen’s queue