Salaam Venky: Kajol Had This Much Fun Promoting Her Film With Co-Star Vishal Jehtwa 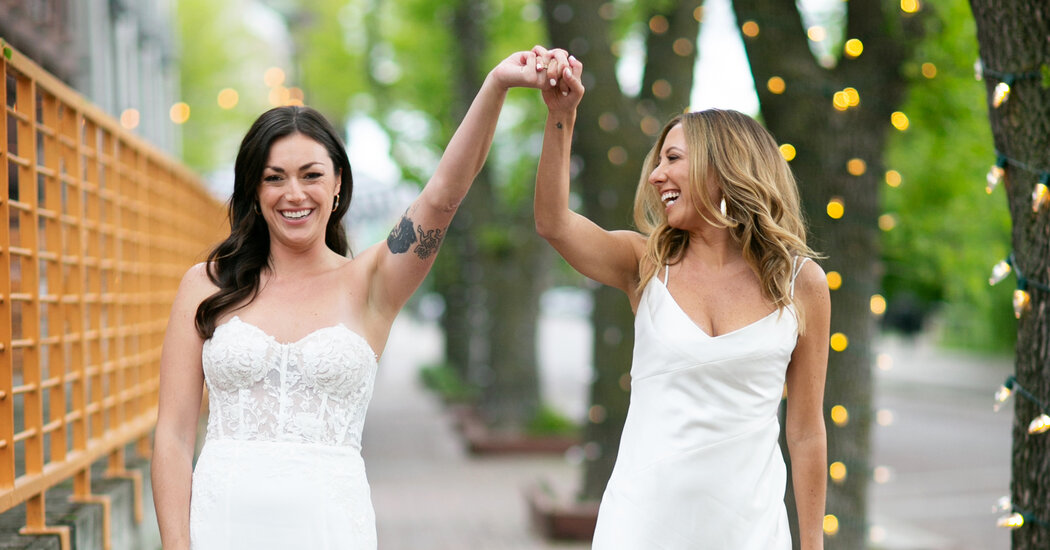 His Second Try at a Good First Impression Did the Trick

Just 20 minutes into their first date in January 2020, Lauren Elizabeth Levin and Chelsea Veronica Cimilluca, who had previously connected on the dating app Hinge, realized that they had already met in person.

In October 2019, both had attended the same party at Public Records, a bar in Brooklyn, organized by Ellis Presents, which hosts events for lesbian and queer women. “I saw a mutual friend and wandered over, and Lauren was with her,” Ms. Cimilluca said, adding that she was there on a date that “wasn’t going well.”

“When Chelsea walked over, I was blown away,” said Ms. Levin, who was living in West Hollywood, Calif., and went to the party with a friend while in New York for a business trip. “But she then ran off and said she was on another date.”

Ms. Levin would travel monthly to New York for work. She was on another business trip in January 2020 when the two matched on Hinge and later made plans to meet for drinks at Alphabet Bar & Café at the Moxy hotel in Manhattan’s East Village.

Ms. Cimilluca, then 27 and living in Brooklyn, had recently set her age preference on the app to 39, her favorite number. “It kept popping up in my life,” she said, including on the Hinge profile of Ms. Levin, then 39, who had lowered her age preferences on the app at around the same time.

Although they didn’t recognize each other at first, Ms. Levin realized they had met before when Ms. Cimilluca mentioned her job as a manager of video operations at the media company Condé Nast Publications, which she had started the same day as the party. As they talked, Ms. Cimilluca “remembered me, too,” said Ms. Levin, who works remotely as the chief marketing officer at Lightstone, a real estate company in New York. “I perked up.”

When their first date took place, Ms. Levin only had a few days left of her business trip. But the two managed to see each other three more times before she left New York. After she did, they talked every day on the phone or via text message.

Despite being open to partners of different ages, the 12-year gap between Ms. Levin, now 41, and Ms. Cimilluca, now 29, was something both said they were initially concerned about. But those worries subsided as the pair got to know each other and discovered that they shared similar interests, which include a love of sports, and beliefs, including in spirituality.

Ms. Levin, who is Jewish, said she has always been closely connected to her religion. Ms. Cimilluca, who has practiced manifestation as a technique to achieve personal growth, identified with Ms. Levin “as someone who cares a lot about her own spiritual growth and self growth,” she said.

“I was truly drawn to that, because I knew that I needed someone who appreciated how much I care about growing,” added Ms. Cimilluca, who converted to Judaism earlier this year.

When Ms. Levin returned to New York for another business trip in February 2020, she spent every night of her weeklong visit with Ms. Cimilluca. That month, while celebrating Valentine’s Day together, each declared her love for the other.

“Then we became girlfriends,” Ms. Levin said. “It was really exciting and I was like ‘Well, I’ll see you when I’m back in March.’” But before she could return, the pandemic arrived.

Just as lockdowns took effect in New York that month, Ms. Cimilluca flew to California to quarantine with Ms. Levin at her West Hollywood apartment. Ms. Cimilluca later decided that she would stay and work for Condé Nast remotely. That June, the couple bought a home together in Los Angeles’s Studio City neighborhood.

They became engaged in December 2020, when each proposed to the other. Ms. Levin did so first, while she and Ms. Cimilluca were having a picnic at Calamigos Ranch in Malibu, Calif. A week later, on New Years Eve, Ms. Cimilluca proposed to Ms. Levin at their home.

The two were married May 21 at Temple Israel in Minneapolis. Rabbi Marcia Zimmerman, the congregation’s senior rabbi, officiated at the ceremony. An intimate dinner with 15 vaccinated family members followed at Ms. Levin’s brother’s home in Wayzata, Minn., on Lake Minnetonka.

After a first dance to “Strangers in the Night” by Frank Sinatra, the newlyweds kicked off their shoes and competed in a boys vs. girls basketball game.

The boys won, Ms. Levin said, “but in all fairness, they had shoes on and weren’t in wedding gowns.”

A Romance Deepened by the Golden Rule