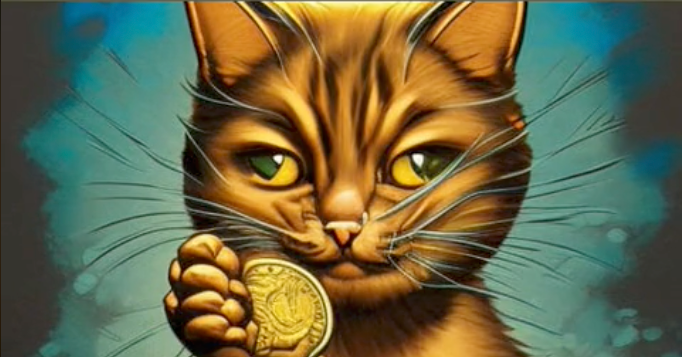 It started with a picture of a cat’s paw. It became a game of wins and losses, a warped mirror of capitalist reality and, importantly, a giant inside joke.

In case you hadn’t heard: There is a rapidly growing trend where people on TikTok are spending, collecting, gaining and losing a form of fictional money known as “dabloons” (not to be confused with the former Spanish gold coin). The hashtag #dabloons, marking dabloon-centered videos, has over 417 million views on the platform. By Thursday morning, the number had increased by over 150 million views in 24 hours, and continued to grow.

The game goes like this: A user scrolls along on their For You page to see if they happen upon one of the multitude of “DabloonTok” videos. Many of these videos imagine the viewer as a weary traveler across the internet, the hero in an epic scrolling odyssey. They invite you in for a meal or a bit of cozy rest, and feature a cat that then charges you or generously gifts you dabloons.

Alexis Bishop, an actor who lives in Orlando, Fla., keeps track of her 174 dabloons on a whiteboard in her office. “Basically, it’s just an imaginary economy that runs off the honors system,” Ms. Bishop, 26, said in a phone interview.

How are cats involved?

Cats — and specifically their paws or “toe beans” — are arguably the foundation of the dabloon “economy.” On Tuesday, meme database Know Your Meme published a history of the dabloon, suggesting that it has roots in posts from a cat meme Instagram page in the spring of 2021.

In one picture posted on the account, a single cat paw is outstretched almost like a human hand, separated into four distinct toes, with a caption that simply says: “4 dabloons.” One dabloon per cat toe. One user on a Reddit post suggests that the naming convention comes from the shape of cat toes’ similarity to coins, but another suggests the cat paw is meant to be understood merely as demonstrating the amount of money owed in a transaction, as if the cat is meant to be the salesman. (You be the judge.)

The same Instagram account also posted a blurry image of a black cat, which looks to be in motion, with its paw splayed out like a four-pronged talon. This black cat reappears in many of the dabloon posts across different platforms, like a mascot for the game. The exact origin of the cat photos remains unclear, but they’ve become the furry canon at the heart of dabloon lore.

What are the rules, and what does this all mean?

It seems the only rule of the dabloon world is that everyone agrees to play along. In the span of days, the game has taken on layers, morphing into an intricate web that mimics real life economic consequences and capitalist practices, although the looseness of the dabloon economy’s money supply would horrify non-feline central bankers.

When people began to make videos offering viewers large sums of free dabloons, the community faced “inflation.” Some people have been robbed by dabloon thieves and pirates. Other users have set up shop, selling wares such as stews, crystals and cottages, offering dabloon insurance or bank accounts and adopting user names like “Dabloon University.” Several users announced their campaigns for “dabloon president,” and at least one account indicated the community would hold an election.

Although the dabloon has yet to buy anyone a real bowl of stew — which would, intriguingly, set a reference rate for the value of the fake currency versus a real one like the dollar — it has demonstrated TikTok users’ serious commitment to the bit (and to having some fun online). It may have started as a niche and obscure trend, but it’s moved somewhat into the mainstream.

Who were the Hollywood Cricket Club?

The singer and influencer Loren Gray, who has 54.5 million followers on TikTok and was once the most-followed person on the app, posted a TikTok video on Wednesday afternoon in which she appeared with a solemn face and said, “I don’t know how many dabloons I have anymore. Every other TikTok I see, ‘Here’s a dabloon checkpoint, here’s 100 dabloons. Oh no, the dabloon economy is crashing.’”

She went on to say that offline, her friends didn’t understand what she meant when she told them about the happenings on Dabloon TikTok. She captioned the video: “The dabloon IRS is at my door and no one understands.”

But even as the dabloon economy gets increasingly complex, Ms. Bishop offered a clue to its popularity among the TikTok crowd. She said its collaborative silliness is a relief compared to the high stakes of the real one.

“People really like the idea of being able to influence this little micro economy,” she said. “It feels like they’re able to be a part of it in a way that’s way less stressful than real money.”

Could Cristiano Ronaldo be Portugal's super sub for the rest of the World Cup?

How Do You Tell a Vandal From a Visitor? Art Museums Are Struggling.