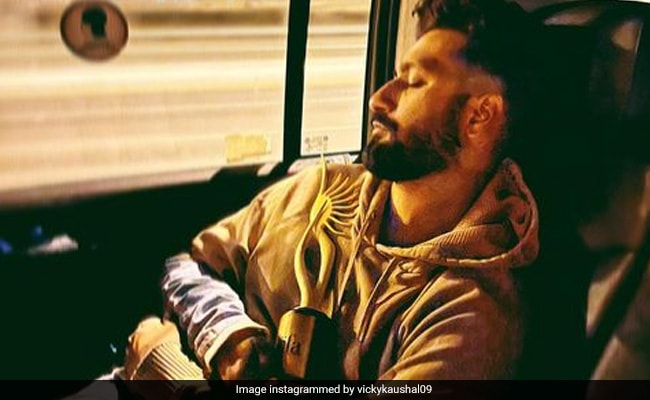 Vicky Kaushal is on cloud nine. After all, he has bagged the award for the best performance for a leading role (Male) at the IIFA 2022 held in Abu Dhabi. He won the award for the film Sardar Udham, directed by Shoojit Sircar. Truly elated with this feat, Vicky has shared a special note on Instagram along with a picture of himself holding the trophy close to him. “Behind all that jazz it’s that boy who once thought everything he wished to achieve was all too far. Waited for you since forever…Not leaving you tonight. IIFA Best Actor.” For his director Shoojit Sircar, Vicky said, Thank you, Shoojit Sircar for believing in me and making it possible for me and thank you Team Sardar Udham, this one’s for all of us. For everyone who voted for this win, I love you.”

Apart from his fans, Vicky Kaushal’s friends and colleagues from the industry have flooded the comment section with their warm wishes and compliments. Director Shoojit Sircar was among the first to drop a note for the actor. He said, “Well done Vicky Kaushal. Proud of you.” Brimming with joy, Vicky’s father Sham Kaushal also dropped a sweet note. “Rab di meher. Love you and proud of you, Puttar. Love and blessings,” it read. Aditya Dhar, who has directed Vicky’s URI: The Surgical Strike, commented, “Ye hui na baat. Shabaaash mere laal,” with a couple of emojis.

Vicky Kaushal is also known for his charming looks and killer fashion sense. His “Touchdown Abu Dabhi” post spread like wildfire. Vicky is seen rocking a beige coloured jacket with a white shirt underneath and a pair of trousers in the same shade. For the caption, he wrote, “Touchdown Abu Dabhi. Time for IIFA.”

Vicky Kaushal will be next seen opposite Sara Ali Khan in an untitled film. He also has Meghna Gulzar’s Sam Bahadur, and Govinda Naam Mera opposite Bhumi Pedenekar in the pipeline.

Sam Bahadur: Vicky Kaushal’s Film To Release On This Date

Vicky Kaushal Is Bingeing On “Yummiest Healthy Things”; Find Out What