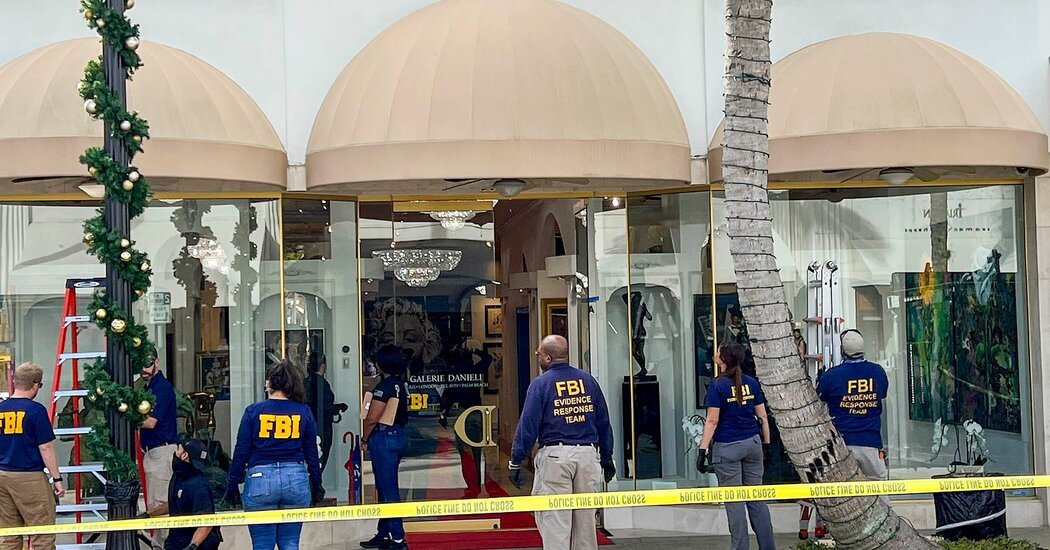 Sibling rivalry is common in THESE zodiac pairs

The art enthusiast couldn’t believe what was hanging on the walls of a gallery in Palm Beach, Fla. — pieces by renowned artists, listed for unbelievably low prices.

The gallery’s owner offered that customer a deal — four original pieces by Roy Lichtenstein, Keith Haring and Henri Matisse, works the customer later described as the “holy grail,” all for $290,000 paid by credit card in April 2021.

According to federal prosecutors, the bargain was too good to be true.

Daniel Bouaziz, the gallery’s owner, appeared in federal court on Friday in the Southern District of Florida to face charges of fraud and money laundering. Prosecutors contend that pieces he represented as authentic works were cheap reproductions that Mr. Bouaziz bought through online auctions.

Mr. Bouaziz was charged after an investigation that included search warrants at his two galleries, a review of financial records and undercover purchases of what was determined to be fraudulent art, as well as evidence collected from six victims who had purchased art later deemed fraudulent.

The Enduring Legacy of Andy Warhol

The artist’s cultural prominence has hardly diminished in the decades since his death in 1987.

In the case of the customer who purchased what they considered to be their “holy grail,” the artworks were presented to a gallery in New York, whose director said that something “looked off,” according to the federal complaint. The sizes of some of the pieces didn’t match the originals, and a few edition numbers were incorrect. Worse, the customer found a Lichtenstein print on eBay that exactly matched the Lichtenstein they had bought, except that the one on eBay cost only $535.50.

“Let’s face it, the business of art is a subjective matter,” said Howard Schumacher, the lawyer representing Mr. Bouaziz. “Everything is done to try to make sure that what’s being sold is what it’s represented to be,” but he said “there’s always the possibility” of fakes, “because nobody spends days trying to do work on the age of the paint and the age of the paper.”

“There are lithographs, and there are reproductions, and many times the lithographs and reproductions are authorized by whoever’s managing the portfolio for that particular artist,” Mr. Schumacher said. “There’s a number of different things that have value in different genres within the same work.”

Mr. Schumacher said that Mr. Bouaziz had offered these clients full refunds. Prosecutors say that Mr. Bouaziz laundered his victims’ money, using his profits to purchase a Cartier watch, a Lamborghini and a limited-edition gun collection.

According to the federal complaint, Mr. Bouaziz conducted his art dealing through three companies: Galerie Danieli, Danieli Fine Art and VIP Rentals LLC. The website for Danieli Fine Art advertises a collection from a wide range of notable artists, from Monet and Rodin to Jean-Michel Basquiat and Willem de Kooning.

“There was a good number of pieces that were taken from his galleries and, based upon the conversations with the U.S. attorney’s office, I don’t think that the government has done any expert evaluation on any of those pieces at this point,” Mr. Schumacher said, also noting that prints, even if not original, can have considerable value.

In September 2021, an undercover F.B.I. agent began buying art from Mr. Bouaziz, including a screen print by Lichtenstein titled “The Solomon R. Guggenheim Museum” that Mr. Bouaziz sold to the agent for $25,000. Mr. Bouaziz described the piece as “top-notch,” according to the complaint, and told the agent, “I guarantee my stuff.”

But, in January 2021, Mr. Bouaziz had purchased what was called “Original Lithograph Limited Edition” online from a company in Spain for 450 euros, or about $480. According to the complaint, an online image of “Original Lithograph Limited Edition” was identical to the screen print sold to the undercover agent. The F.B.I. Art Crime Team examined the artwork and found that it had a mechanically reproduced signature, not an authentic one.

Mr. Bouaziz, a French citizen born in Algeria, is in the United States on a B-2 visitor’s visa, which does not allow him to own and operate a gallery, prosecutors said. He submitted a request in April 2021 for a loan for VIP Rentals, under the federal government’s Paycheck Protection Program created to help keep businesses operating through the Covid-19 crisis, and falsely claimed he was a U.S. citizen, according to the complaint.

Mr. Schumacher declined to comment on his client’s immigration status.

A Panorama of Design

‘My Dead Dad’ Review: Learning the Ropes, Thanks to an Inheritance

Sibling rivalry is common in THESE zodiac pairs