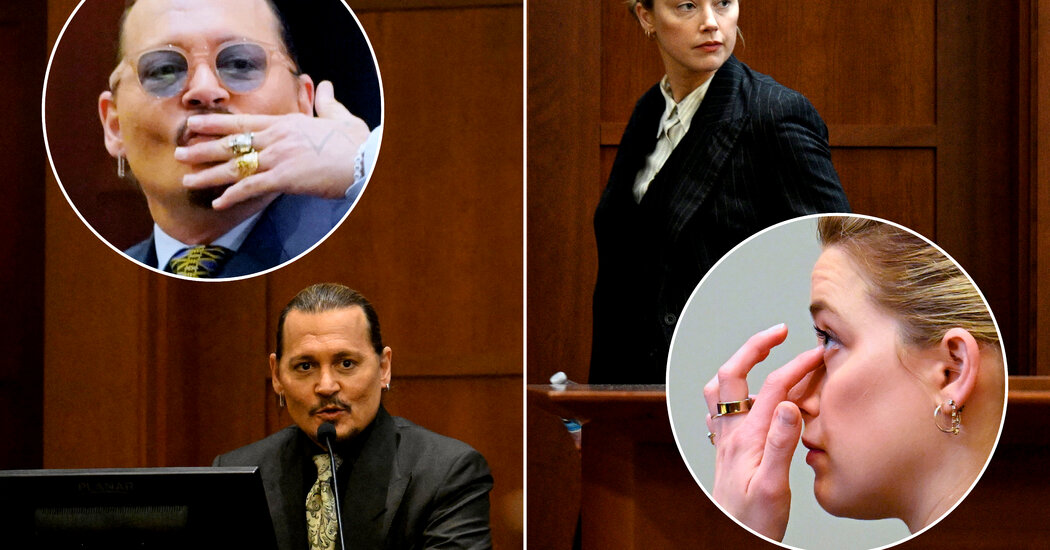 The sheer amount of material recorded each day enables viewers to examine every inch of the courtroom with a conspiratorial zeal, as empty gestures and meaningless asides are whipped into dubious case clues, spliced into humiliating Heard reaction GIFs or leveraged to build a charmingly unbothered bad-boy court presence for Depp. (He doodles in court! He can’t remember the names of his own movies!) Exhibits supporting Heard’s claims — like a video she recorded of Depp pouring himself a gigantic cup of wine and violently smashing glasses in their kitchen one morning — are stripped of evidentiary value and bandied about as memes. Each day of the trial begins with Depp fans convening online and joking about downing their breakfast “megapints” of wine.

Viewers assess both Depp and Heard’s court appearances as studied performances, but it is as if they have been cast in separate genres, with Depp playing the suave comedy hero and Heard pegged as the histrionic villain from an ’80s erotic thriller. YouTube thumbnails freeze their visages into masks of comedy and tragedy — he is perpetually smirking, she is permanently aggrieved. (Except when she smiles, in which case her expression is proffered as evidence of her calculated heartlessness.) The cartoonish construction of the double standard (animated hearts for Depp, devil horns for Heard) is the point — many TikToks are soundtracked with the circuslike theme from “Curb Your Enthusiasm,” trapping Heard in the role of sad clown.

In the courtroom. A defamation trial involving the formerly married actors Johnny Depp and Amber Heard just concluded in Fairfax County Circuit Court in Virginia. Here is what to know about the case:

Ms. Heard’s op-ed. Mr. Depp’s suit was filed in response to an op-ed Ms. Heard wrote for The Washington Post in 2018 in which she described herself as a “public figure representing domestic abuse.” Though she did not mention her former husband’s name, he and his lawyers have argued that she was clearly referring to their relationship.

The domestic abuse claims. In the 2020 trial, Ms. Heard accused her former husband of assaulting her first in 2013, after they began dating, and detailed other instances in which he slapped her, head-butted her and threw her to the ground. Mr. Depp has since accused her of punching him, kicking him and throwing objects at him.

The verdict. After a six-week trial, the jury found Mr. Depp was defamed by Ms. Heard in her op-ed, but also that she had been defamed by one of his lawyers. Mr. Depp was awarded $15 million in compensatory and punitive damages, but the judge capped the punitive damages total in accordance with legal limits for a total of $10.35 million. The jury awarded Ms. Heard $2 million in damages.

Anyone else who appears in court risks being lifted into an internet folk hero or smeared as a liar. Heard’s attorney Elaine Charlson Bredehoft is branded a “Karen” (once a term for a racist white woman, it has since been flattened into an all-purpose misogynistic slur) and conspiratorially constructed as an undercover Depp fan, while Vasquez is cast as a Depp love interest, hailed as an internet sensation for her “intimate” interactions with her client. Seemingly every woman tangentially involved in the case has been imbued with imagined Depp-lust. Dr. Shannon Curry, an expert witness called by Depp’s team, has been celebrated for “exchanging glances” with Depp on the stand; even Curry’s husband, who she mentioned once delivered muffins to her office, has been inflated into a treasured fan fiction character referred to as “the muffin man.” Meanwhile, Depp supporters have harassed two of Heard’s expert witnesses off the medical professional site WebMD, flooding their profiles with one-star reviews.

The internet livestreaming of the trial has created its own virtual sport. Each day hundreds of thousands of viewers congregate on YouTube livestreams, like the one hosted by the Law & Crime Network, and type comments into a racing sidebar chat. Some pay as much as $400 to have their comments highlighted and pinned to the top of the chat — the more you pay, the longer your commentary lords over the proceedings. During Wednesday’s stream, one participant paid to say that Heard “has a nesting snake on her head”; another promoted his YouTube novelty song about Heard’s legal team.

The immediacy of the livestream and its commentary gives viewers the illusion that they can somehow influence the outcome of the case; someone is always pleading for an internet artifact to be “forwarded to Camille,” as if obsessive fan attention alone might crack the case. This week, Depp’s team called a witness who surfaced after he posted a tweet in response to a pro-Depp Twitter account’s coverage of the trial.

Even if they cannot influence the trial itself, viewers can shape public opinion in real time. Once a fan fiction scenario gains enough momentum to achieve escape velocity, it is elevated into mainstream tabloids, which are rife with reports of Depp’s courtroom flirtations and epic witness-stand one-liners. Once gossip journalists had to craft celebrity story lines themselves, but now the narratives are lifted straight from social media and enshrined as Hollywood canon. Gossip sites are regurgitating banal celebrity internet activity as heartwarming Depp content: Jennifer Aniston followed Johnny Depp on Instagram as a “subtle sign of support,” the magazine claimed, and Depp followed Aniston back as a “sweet gesture.”

What’s on TV This Week: ‘Atlanta’ and Fall Previews

Struggling To Find The Right Room Heater? Let’s Help You Figure Out

Review: The 2023 Cadillac Escalade-V is a ridiculously powerful truck

What is Pride Month? How to celebrate LGBTQ pride in the US