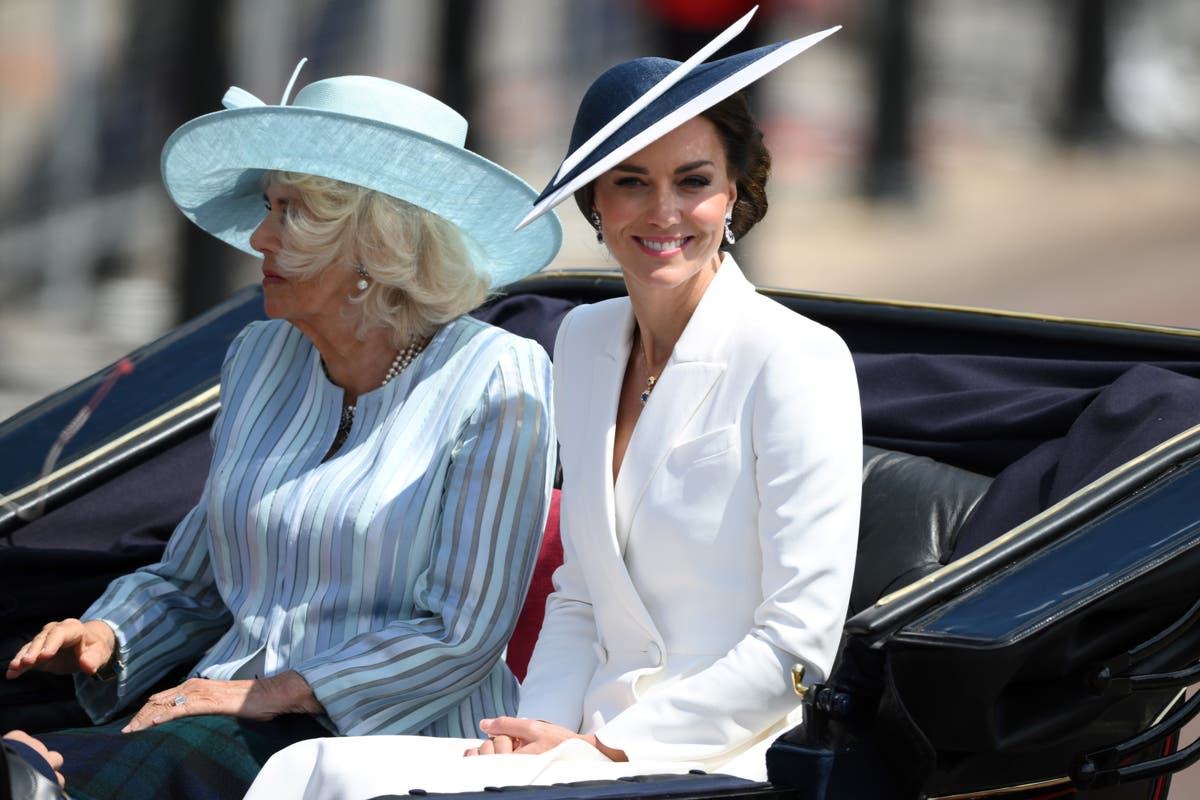 Royal women went for fresh summery shades for their outfits on the first day of platinum jubilee celebrations.

The Trooping the Colour parade on Thursday 2 June brought thousands of spectators to Buckingham Palace to watch working members of the royal family gather on the balcony to mark the start of the four-day bank holiday weekend.

The Queen appeared in high spirits as she stepped out onto the balcony with the aid of a walking stick, flanked by the Prince of Wales on her right and the Duchess of Cambridge on her left, alongside four-year-old Prince Louis and seven-year-old Princess Charlotte.

The Queen wore the dusky dove blue Angela Kelly outfit that she was wearing in the photograph released by Buckingham Palace on Wednesday.

The Charmelaine wool dress is embellished with a pearl and diamante trim around the neckline which also cascades down the front of the coat.

She completed the outfit with a hat in matching dusky dove blue Charmelaine wool with a turned up brim embellished with the same pearl and diamante trim.

Fastened to the coat was the Guards’ Badge, and she went for a pair of pearl earrings and a pearl necklace.

The Duchess of Cornwall and Kate Middleton rode in the same carriage for the royal procession, together with Prince George, eight, Louis, and Charlotte, who made their debut in the parade.

Sophie, the Countess of Wessex wore a pink and cream gingham dress with button and pocket detail.

Riding through the procession next to her husband, Prince Edward, and their two children, James Viscount Severn and Lady Louise, Sophie also accessorised her look with a matching hat and a pearl necklace.

Although she did not appear on the balcony, the Duchess of Sussex was photographed watching the Trooping the Colours parade from the Major General’s Office with Prince Harry.

She was seen wearing an off-choulder navy blue dress paired with a summery white hat accessorised with a navy bow, thought to have been designed by British milliner Stephen Jones.

Eagle-eyed fans believe that Meghan recycled one of her old wedding outfits for the occasion, as she wore a similar dress designed by Roland Mouret ahead of her wedding to Harry in 2018.

From Iqbal to Malala: 9 child activists you should know about | The Express Tribune

Selena Gomez Shares Photo of Her Hang Out With BLACKPINK