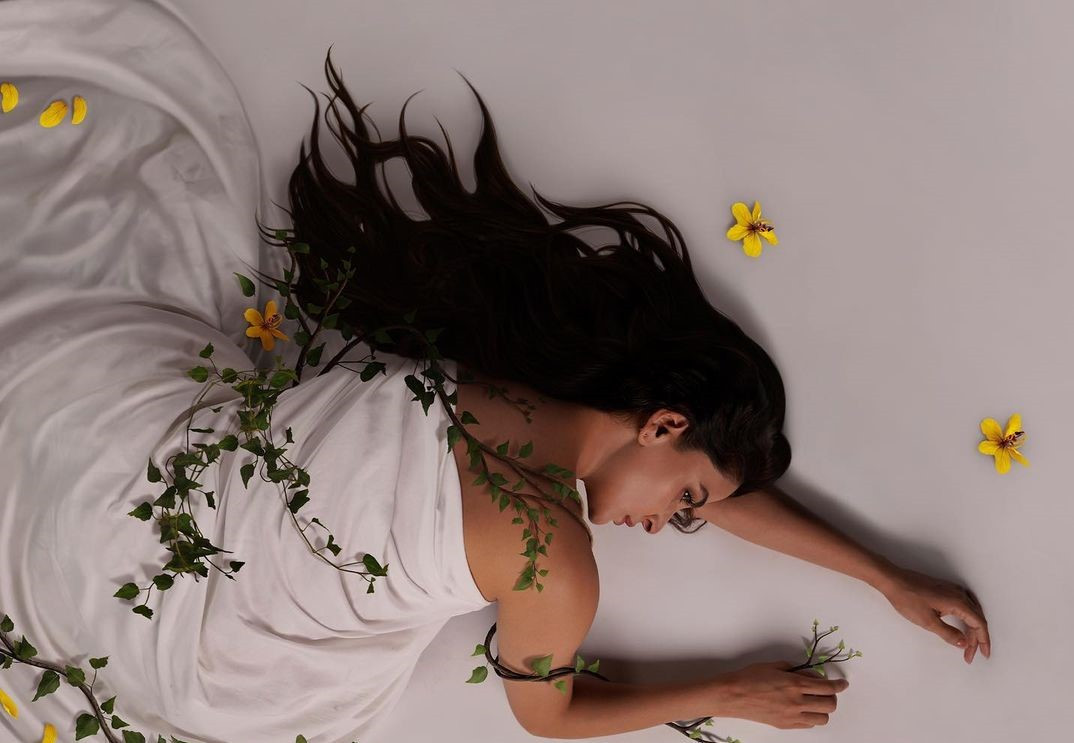 From cinematography to music to writing to acting, Sarmad Khoosat’s poetic marvel is a winner through and through


Do you ever feel stuck in a moral conundrum between the pulls of a loud tradition and the hushed sound of your inner desire? Do you ever feel suffocated knowing how every door to exit is a hoax and you’ll forever be trapped in it? Like every silver lining is a cruelly ripped band-aid of a near-healing wound?

If you’re nodding, then Sarmad Khoosat’s bittersweet poetic universe of Kamli will absorb you completely. It will make you feel seen and heard in its dreamy landscape abundant with mysterious, haunting, dark corners. The symbolic tale of longing and love amidst culturally-bounded relationships, takes off with a close shot of the beautiful Saba Qamar as Hina, assuming the lifeless abandoned wife, rotting away with the passage of time while taking care of her visually impaired sister-in-law, Sakina (Sania Saeed).

Hina’s world begins with modelling vivaciously with her friends for a rather feisty artist, Zeenat (Nimra Bucha), and ends with her sister-in-law reminiscing about her run-away brother. Trapped in a dead cyclical routine, her world shifts gears with the introduction of a young wanderer’s touch.

Amaltas (Hamza Khawaja), dives into Hina’s world— quite literally – to rescue her from her own prison. There’s something about his deep eyes that pulls her into his embrace. The two share a fiery chemistry onscreen as they crave to be one. Khoosat’s decision to show their animalistic instincts by recreating the lion mating dance in a jungle is phenomenal. 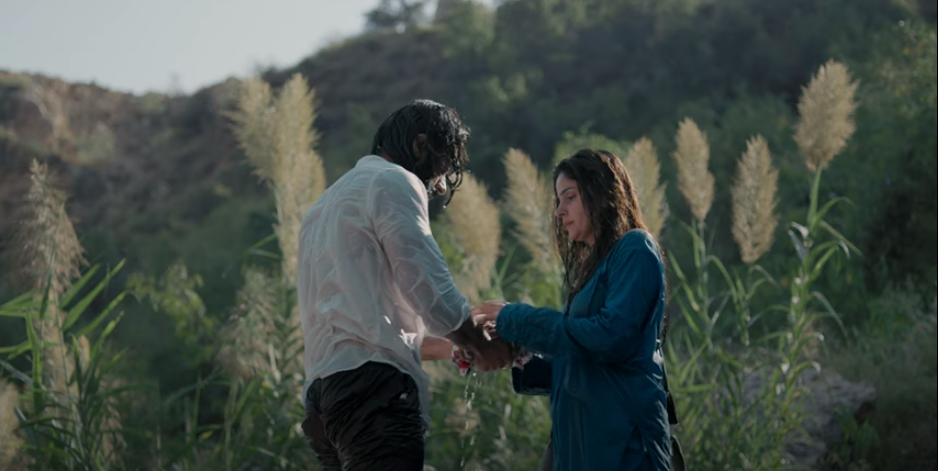 Each character in Khoosat’s cinema is battling their own inner conflicts. With Zeenat fighting a long-dead marriage, she is drowning in her addiction of alcohol and grief, and her husband Nadir Malik (Omair Rana), yearns to fill the gaps between the trench she’s dug between them. 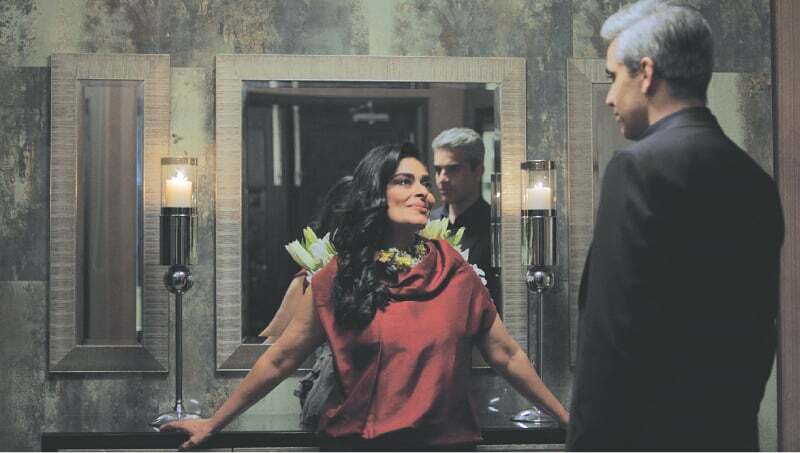 Sakina is the perfect product of a cruel society that has internalised tradition and has sworn to not let go of it even if it’s eating off of her peace and the ones around her. Her love and care for her bhabhi Hina is claustrophobic and enables her to go to lengths in order to protect the honour of her house. She’s selfish, manipulative, and ignorant and yet the blind woman is relatable, for we see thousands of women around us that are affected by the chains of trauma holding closely to piety as the only familiar thing to them.

Amaltas’ distance from the world of other characters in the romantic thriller makes him the perfect misfit, representative of the nature of the film itself. He’s needed but won’t be accepted. There’s something about his presence, his silence, his placement that reckons him as unreal. He’s too sane to be amongst this lot. A moth attracted to the fire that burns inside Hina.

Hina, on the other hand, is blinded by the light Amaltas is blinking at her face. It’s like she can see a car approaching but she can’t seem to take her eyes off of the road. She’s frozen and stuck and yet this is the most she has travelled in the pursuit of her own happiness.

On that note, do you ever feel blinded by external powers and use them as an opportunity to escape? Do you feel pestered by the blurred line between imagination and reality? Do you ever feel like you’re living two lives? It’s exhausting but enthralling. Kamli, a screenplay based on an original story by Churails actor Meharbano, walks that exhausting path and you feel every emotion along the way. 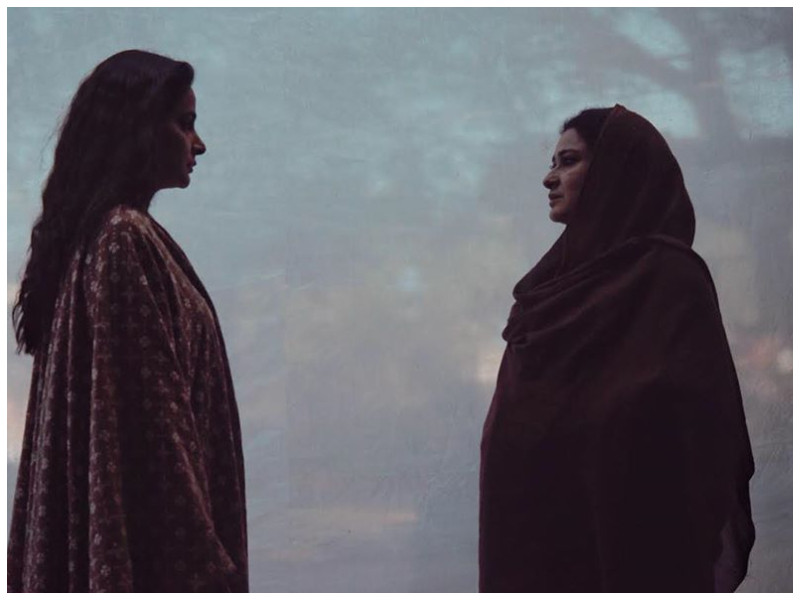 Besides the careful characterisation of humans, the film thoughtfully juxtaposes animals and nature to add to the frailty of relations and the constant battle between self and the world. There’s the ethereal sounds of peacocks, rabbits and kittens. Rain, thunder and fire add their own share of storytelling to the narrative. Each element of life is utilised to contribute to this tragic love affair— creating an honestly flawed but real depiction of love in the realm of cinema.

One might feel annoyed by the slow pacing of this traumatic tale but even that is hard, given how each frame, each scene holds a purpose and conveys it to the fullest. Complimenting the moods of love, longing, wrath and loss, Saad Sultan has constructed the perfect background score for the film. It is haunting, serenading, enchanting and engrossing. Kamli’s music tells a story of its own. Kamli also pays homage to Reshma jee with Maina Tu, bringing back her melodious voice at a turning point in the film.

After critically acclaimed projects like Akhri Station and Manto, stellar storytelling is expected of Khoosat. But this time, he went above and beyond and has shattered the ceiling of his own expectations by creating cinema that Pakistanis can proudly claim as their own. Kamli’s attempt at reimagining forlornness in a society subconsciously engrossed in its values will forever stay etched in your minds, reminding you of the mirrored wall between your reality and desires.

Nicole McLaughlin’s Designs Are No Joke

She Fell in Love With an Essay, and Then With its Author

Even as NFTs Plummet, Digital Artists Find Museums Are Calling

Weight loss: Detox drinks to have on an empty stomach to shed kilos