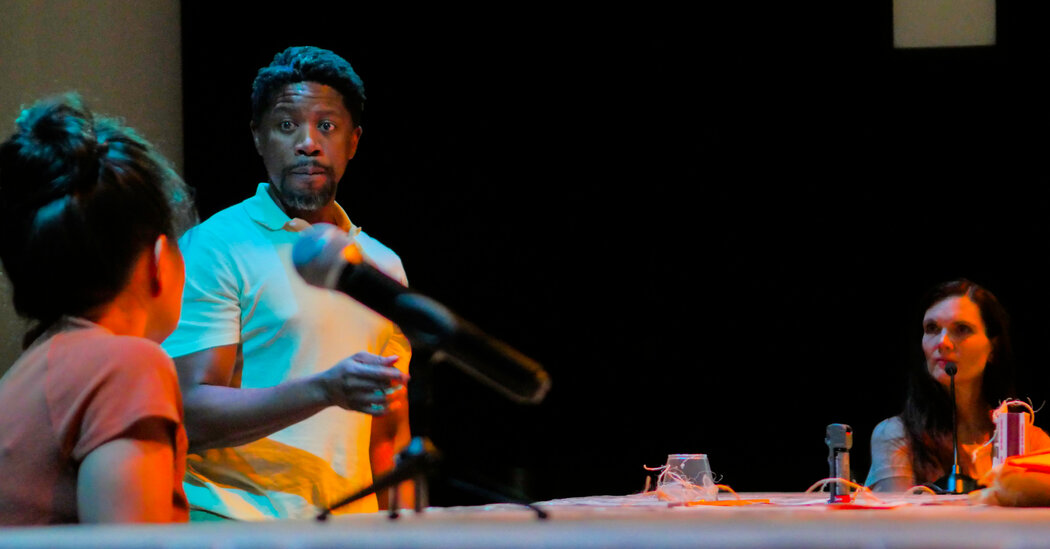 No matter where you decide to sit, you won’t see everything in “A Kid Like Rishi,” Kees Roorda’s thrumming documentary play at the Cell Theater, and surely that is very much by design.

The task looks straightforward enough, going in — nothing obvious like columns to obstruct a person’s view. The room is deeper than it is wide, and the set consists mainly of a long wooden table and a few microphones, with audience members choosing seats along each wall. Projected feeds from four video cameras show various angles of the space we’re in, which is not large. We would seem to have the area sufficiently surveilled.

Yet from the start of this gripping, understated drama, which recounts the killing of a 17-year-old boy of Surinamese descent by the Dutch police in 2012, we can’t always get a clear perspective. An actor’s back is to us, or one of the performers is blocking our vantage on another, or the video is too indistinct to show what we’re looking for. Which, ordinarily, would be maddening.

In Erwin Maas’s stark production for Origin Theater Company, it becomes instead an exercise in visceral understanding — because our interpretation of events in the world has everything to do with how clear our sightlines are and what’s blocking our view, literally or metaphorically. And the people who witnessed Rishi Chandrikasing’s shooting early one November morning on a train station platform in The Hague — or participated in the police pursuit of him, or passed legal judgment on it, or were left bereft by it — all saw and heard, or believed they saw and heard, very different things in the same lone teenager and the same abrupt execution.

“The District Court in The Hague deems legally and convincingly proven that the defendant intentionally inflicted grievous bodily harm resulting in the death of the victim,” a judge pronounces at the top of the show.

The defendant is an unnamed police officer; the victim is Rishi. But this is an acquittal, not a conviction — because, the judge reasons, even lethal force can be justified, and the police “had to assume that the person in question was armed and dangerous.”

Did they have to, though? And how much do racist fears shape perceptions of innocuous events, injecting mortal peril where no danger at all had been? Those are the questions at the heart of this Dutch play, assembled from courtroom, interview and other transcripts, and performed by a cast of three (Sung Yun Cho, Atandwa Kani and Kaili Vernoff) in an English translation by Tom Johnston.

The acting is for the most part restrained, wisely letting the words — of bystanders, of a police shooting instructor, of Rishi’s haunted mother — speak for themselves. Vernoff strays from this in one portrayal, telegraphing a journalist character’s odiousness, while Kani can’t quite slip into the rhythms of Rishi’s girlfriend. Otherwise, the performances are solid.

And Guy de Lancey’s scenography is outstanding: each element of the set, video, lighting and projections shaping our perception of what is murky and uncertain and what is bright and sure.

Bits of the dialogue are in Dutch, interspersed throughout the play: audio calls relaying tenuous information to police dispatch centers in the minutes before and after the shooting. (The smart sound design is by Fan Zhang, who also composed the production’s tension-filled underscore.) As the recordings play, we don’t see supertitles projected, just the occasional phrase — “Black man,” “Take this with a grain of salt,” “You be careful.”

The full translations of the calls are printed in the program, but our comprehension of those exchanges during the performance is fragmentary, as is the dispatchers’ in what comes to seem like a precarious game of telephone. A nebulous report of a possible firearm, seen by no one, morphs for the police into an urgent, adrenaline-charged, presumed reality: that a threatening man in a white coat has a gun.

Not a single grain of salt appears to have been consumed.

A Kid Like Rishi
Through June 19 at the Cell Theater, Manhattan; origintheatre.org. Running time: 1 hour 20 minutes.

Dramatic Drapes: Unconventional Dupatta Styles to Own This Wedding Season

Who Is the Ion Pack?

Paul Gunther, Keeper of a Cultural Flame, Dies at 65