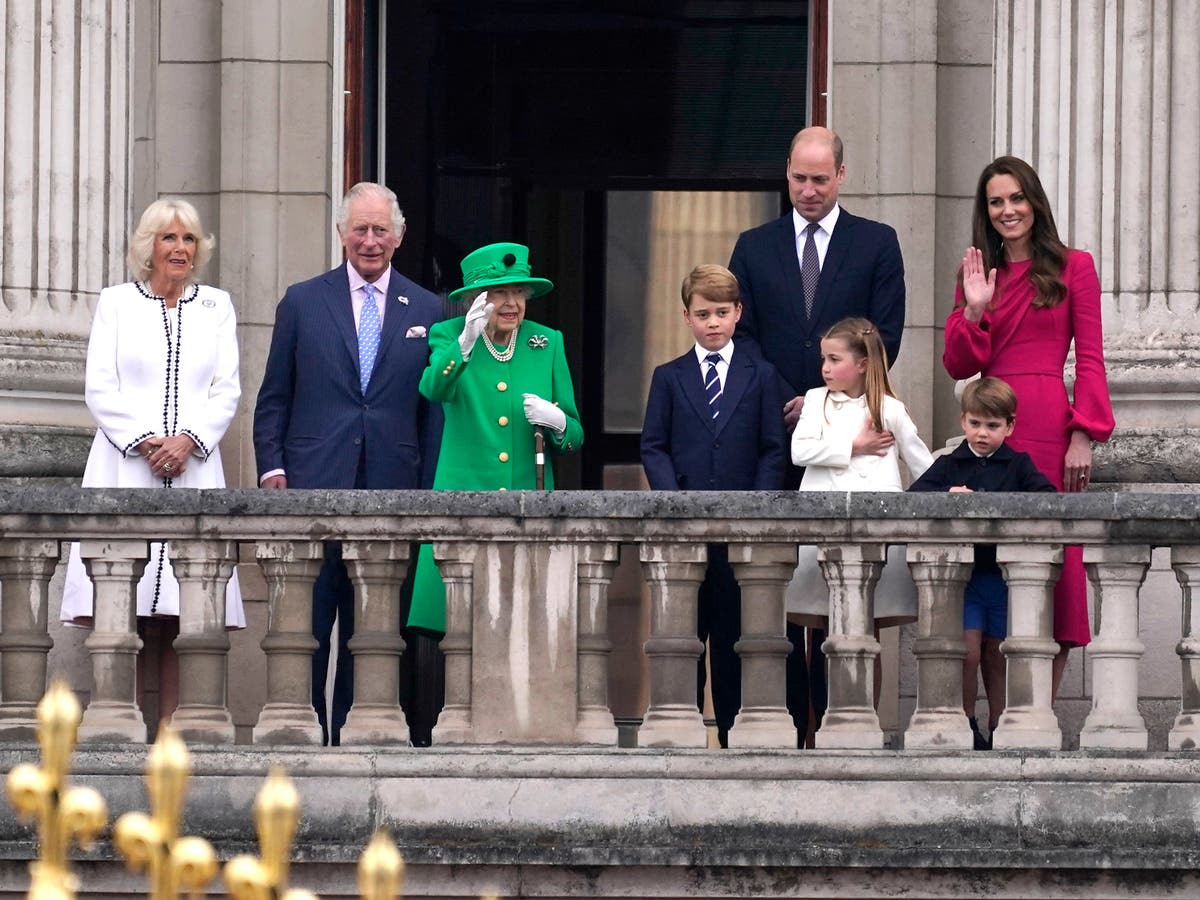 The Queen made a surprise appearance on the balcony of Buckingham Palace after the royal standard was raised above the residence.

Her appearance concluded the Platinum Jubilee pageant, which marked the end of the four-day special weekend.

On Sunday, horses led the the Queen’s Gold State Coach down The Mall as the Platinum Jubilee Pageant began.

A hologram of a young Queen during her 1953 coronation was projected onto the State Coach.

More than 10,000 performers took part in four different acts, each of which helped tell the story of the Queen’s historic 70-year reign.

Those taking part included people from the military, volunteers, theatre performers, key workers and 2,500 members of the general public.

Crowds were treated to a special performance by Ed Sheeran, who sang his hit single, ‘Perfect’.

The pageant coincided with the Big Jubilee Lunch, with thousands of street parties taking place across the UK on Sunday.

Ten million people joined in on local events, BBQs and other community festivites to celebrate the Queen’s platinum jubilee.

Yesterday, Prince Charles paid a moving, personal tribute to the Queen at the Platinum Party at the Palace and thanked her for being there for the nation in good times and bad for 70 years.

The future king was joined by his wife Camilla, Duchess of Cornwall and addressed the Queen, who remains head of state at the age of 96 despite her mobility problems, saying: “You pledged to serve your whole life – you continue to deliver.”

Amongst this weekend’s celebrations, the Queen did not attend the Epsom Derby and platinum jubilee thanksgiving service at St Paul’s Cathedral on Friday, after experiencing “discomfort” following a busy first day of festivities on Thursday.

Watch: The Queen’s Platinum Jubilee: the best moments of the weekend celebrations

The Queen’s Platinum Jubilee: the best moments of the weekend celebrations

‘My heart is with you all’: Queen makes statement to mark end of platinum jubilee

“When it comes to how to mark 70 years as your Queen, there is no guidebook to follow. It really is a first. But I have been humbled and deeply touched that so many people have taken to the streets to celebrate my Platinum Jubilee,” the statement released by Buckingham Palace read.

“While I may not have attended every event in person, my heart has been with you all; and I remain committed to serving you to the best of my ability, supported by my family.

“I have been inspired by the kindness, joy and kinship that has been so evident in recent days, and I hope this renewed sense of togetherness will be felt for many years to come.”

My colleague Laura Hampson has more:

Queen said she remains ‘committed to serving’ the nation

The Queen has said she remains “committed to serving” the nation to “the best of my ability”, after she set the seal on her Platinum Jubilee celebrations by appearing on the balcony of Buckingham Palace.

The 96-year-old monarch was absent for much of the extended Bank Holiday weekend, after finding the first day enjoyable but tiring, and in a message of thanks acknowledged this but said her “heart” had been with well-wishers.

The Duchess of Cornwall, patron of the Big Lunch, estimated that up to 18 million people could have taken part in Jubilee street parties, and the Queen expressed her hope this “renewed sense of togetherness” would be felt for years to come.

After the outpouring of public affection during her balcony appearance, the Queen said she was “humbled and deeply touched” so many people had taken part in celebrations marking her 70-year reign.

Surrounded by her family, she was cheered by thousands of well-wishers after stepping on to the balcony following the Platinum Pageant, which told the story of her life, and the nation, with an eccentric, fun and imaginative carnival-like display.

Smiling as she acknowledged the spectators, she looked down on The Mall where tens of thousands had waited in hope of seeing her.

The Queen said later in her message: “When it comes to how to mark seventy years as your Queen, there is no guidebook to follow. It really is a first. But I have been humbled and deeply touched that so many people have taken to the streets to celebrate my Platinum Jubilee.

“While I may not have attended every event in person, my heart has been with you all; and I remain committed to serving you to the best of my ability, supported by my family.

“I have been inspired by the kindness, joy and kinship that has been so evident in recent days, and I hope this renewed sense of togetherness will be felt for many years to come.

“I thank you most sincerely for your good wishes and for the part you have all played in these happy celebrations.”

Family day out for Royals at Jubilee Pageant

It was a family day out like no other, with prime seats in the royal box, catching up with cousins and clapping along to classic tunes.

The Platinum Jubilee Pageant was an afternoon of entertainment for members of the royal family, who all sat together alongside their siblings and cousins.

Prince Louis, the youngest child of the Duke and Duchess of Cambridge, moved around a little, cosying up to both his parents and his grandfather the Prince of Wales.

At one point, Charles rocked his four-year-old grandson from side to side on his lap.

Louis joined his big brother and sister, Prince George and Princess Charlotte, in the royal box.

As George stood for part of the parade, he mirrored his father William, both adjusting the front of their jackets at the same time.

He was also spotted resting his head on his hand during the show.

Lasting two and a half hours, it was not surprising that restlessness may have set in for the younger spectators.

Zara Tindall watched the pageant with three-year-old daughter Lena on her lap, while her other daughter Mia, eight, sat on her father Mike’s lap and had her arm around his neck.

At one point, little Lena sat on her 11-year-old cousin Savannah Phillips’s lap.

Princess Eugenie could be seen bouncing her son August on her knee.

The one-year-old was wearing a jumper with a Union flag on the front.

Later, Eugenie posted pictures and videos on Instagram showing August, her husband Jack Brooksbank, and her view of the pageant.

Meanwhile, the Princess Royal, 71, looked happy as she sat next to her brother Charles and clapped along to Kool & The Gang’s Celebration.

Royal fans were delighted to see the monarch make a final balcony appearance to mark the end of the weekend’s celebrations, with some even saying that it made them “emotional”.

“I did not think that The Queen coming out on the balcony would make me quite so emotional, what a beautiful moment,” one Twitter user wrote.

Moss was a witness for the Depp team during the six-week trial, where she testified that Depp did not push her down a flight of stairs during their relationship in the nineties, Laura Hampson writes.

During the three-minute video appearance, the 48-year-old denied that Depp had ever “pushed her in that way”.

On Sunday, for the platinum jubilee pageant to celebrate the Queen’s 70th year on the British throne, Moss rode atop a double decker bus with makeup artist Charlotte Tilbury, and Bridgerton actor Phoebe Dynevor.

Future of monarchy shown on balcony with ‘magnificent seven’

It was a “magnificent seven” who surrounded the Queen at the Jubilee finale – the core members of the royal family who are shaping the monarchy.

Future king the Prince of Wales, and his wife the Duchess of Cornwall, who was publicly backed this year by the monarch to one day use the title Queen, emerged with the head of state as she stepped onto the Buckingham Palace balcony.

There too were the next in line, the Duke of Cambridge and Prince George.

And the Duchess of Cambridge, like Camilla a future Queen Consort, along with Princess Charlotte and little Prince Louis, the siblings a double helping of spares to the heir, writes Laura Elston.

Princess Eugenie thanks stars and organisers of Jubilee Pageant

Princess Eugenie has expressed her appreciation for all those who organised and took part in the Platinum Jubilee Pageant in an Instagram post.

The post includes a video of her son August Philip Hawke Brooksbank waving at those participating in the Pageant.

With Rising Book Bans, Librarians Have Come Under Attack

Here’s What You Can Do to Repair Damaged Skin Barrier

In Brooklyn, a New Gathering Space for Tower Records