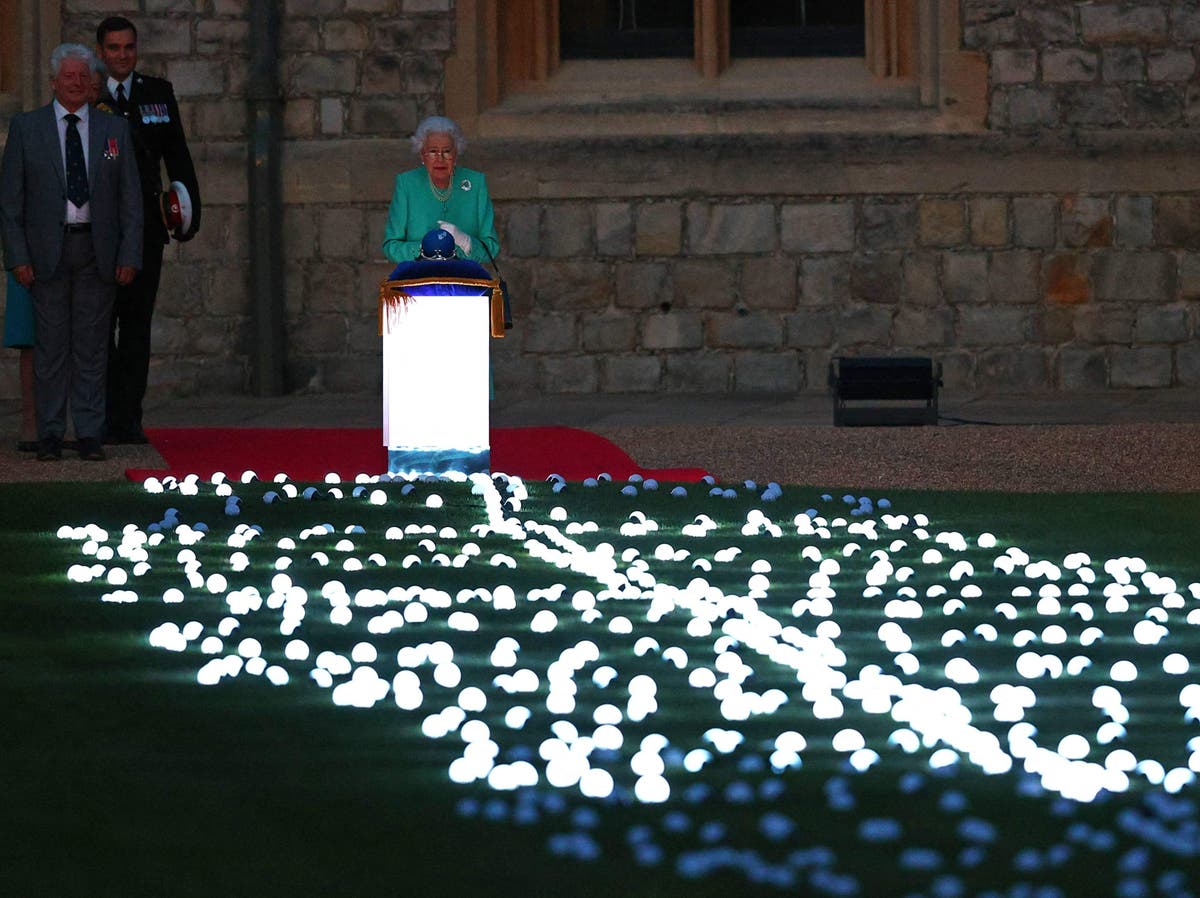 Kulith Kalan Recipe: How To Make This Dal-Based Drink For Healthy Diet

The Queen has lit a beacon of light at Windsor castle to mark her platinum jubilee.

The lighting of the Commonwealth Globe of Nations forms part of special dual ceremony with Her Majesty’s grandson the Duke of Cambridge, who is respresenting the monarch at Buckingham Palace some 20 miles away.

At the Queen’s command, the Tree of Trees sculpture, London’s centrepiece of the jubilee, will light up outside the palace.

The ceremony on Thursday evening was part of a busy four days for the Queen. Earlier the palace announced the monarch will miss the jubilee service of thanksgiving at St Paul’s Cathedral on Friday “with great reluctance” after having experienced “some discomfort” during Thursday’s celebrations.

She is believed to have experienced episodic mobility issues during her appearance on the palace balcony with her family to salute soldiers returning from the Trooping the Colour ceremony.

Thousands of people joined street parties across the UK today, while the royals observed the ceremony on The Mall, followed by a flypast over Buckingham Palace.

Former US president Barack Obama was among those paying tribute to the Queen.

In a video message, he said he felt he had formed a special relationship with the monarch and that he had learnt so much from the example she set.

Her steadfastness stewardship of the UK had made the world a safer place, he added.

“Continue to reign supreme,” he said.

Prime minister to give Bible reading at thanksgiving service

Boris Johnson will give a New Testament reading at the thanksgiving service at St Paul’s Cathedral in the morning.

Members of his Cabinet are also among the guests, along with Labour leader Sir Keir Starmer, first ministers of the devolved governments and former prime ministers.

The diplomatic world will be represented by high commissioners and ambassadors from across the world and also attending are governors general and clergy from world faiths.

The Dean of St Paul’s will conduct the service.

Young people representing countries where the Queen is head of state will lead the ‘Act of Commitment’ celebrating the life and reign of the monarch, led by the Reverend Robert Kozak.

During the day, one of the country’s largest bells, the Great Paul, will be rung before and after the service, the first time it will have been heard at a royal occasion.

Police forces in London joined in street parties to mark the festivities.

Key workers, charity volunteers and members of the armed forces have been invited to the Queen’s service of thanksgiving in recognition of their contribution to public life.

More than 400 people, who have been making a difference either nationally or locally, are among the guests and many have been working tirelessly during the pandemic.

They will join members of the royal family at St Paul’s Cathedral to celebrate the monarch’s 70-year reign, although the Queen herself will not attend after experiencing “some discomfort” following previous mobility issues.

Charles will officially represent the Queen at the service.

Those invited in recognition of their service have all been recipients of honours in the New Year or Birthday Honours lists and their number also includes public servants and representatives from social enterprises and voluntary groups.

Away from the balcony photo

More images of members of the royal family away from the palace balcony:

A Zambian woman who was trafficked by her own father has spoken of the “surreal” experience of lighting the UK’s first Platinum Jubilee beacon.

Alina Karimamusama, who works with the Queen‘s Commonwealth Trust, ignited the large brazier at Coutts bank in central London.

Known as the Queen‘s Bank because it has served every monarch since George IV, it hosted a party for the event with guests including broadcaster Andrew Marr.

More than 2,000 beacons will be lit across the UK and the Commonwealth, in what Ms Karimamusama said was a mark of “hope”.

“It represents the possibilities that young people from communities like mine, young people like me, can reach when they are given the right support,” she said.

Beacons are traditionally lit for royal occasions, having previously been used to mark the silver, golden and diamond jubilees of the Queen, along with Queen Victoria’s Diamond Jubilee in 1897.

What are tactical nuclear weapons and how might Putin use them?

Beacons were lit in towns and cities across Northern Ireland after the Queen sparked the principal beacon at Windsor.

Further beacons were lit nearby at Castle Island, Topped Mountain and the Enniskillen Royal Grammar School.

Joe and Jill Biden have offered their congratulations to the Queen on her platinum jubilee.

The US president said she had inspired people with her “selfless devotion and service” to the UK and the Commonwealth for 70 years.

“Throughout your reign, the relationship between the United Kingdom and the United States has grown stronger and closer than ever,” he said.

Mrs Biden said the joy the monarch had brought the American people through her visits to the US, together with the solidarity she had shown in times of tragedy, had “deepened the friendship and profound connection between our countries”.

“Joe and I were so touched by the generosity and welcome you showed to us when we visited you at Windsor Castle last year, during our first visit overseas as president and first lady,” she said.

An image of the Queen was projected onto Buckingham Palace ahead of the beacon lighting ceremony as crowds looked on from The Mall.

Tree of Trees lit up outside Buckingham Palace

The principal beacon lit by the Queen at Windsor sparked thousands around the globe, none more spectacular than the Tree of Trees outside Buckingham Palace in London.

Prince William was at the lighting ceremony to represent the royal family.

BigBasket Set To Raise $200 Million At Up To $3.5 Billion Valuation: Report

Moms for Liberty’s conservative activists are planning their next move: Taking over school boards

Goldman says these stocks with high cash returns will work in this economy. One of them could nearly double

Her rapists were sentenced to life in prison. Now they’re free, and she’s in hiding | CNN

Kulith Kalan Recipe: How To Make This Dal-Based Drink For Healthy Diet