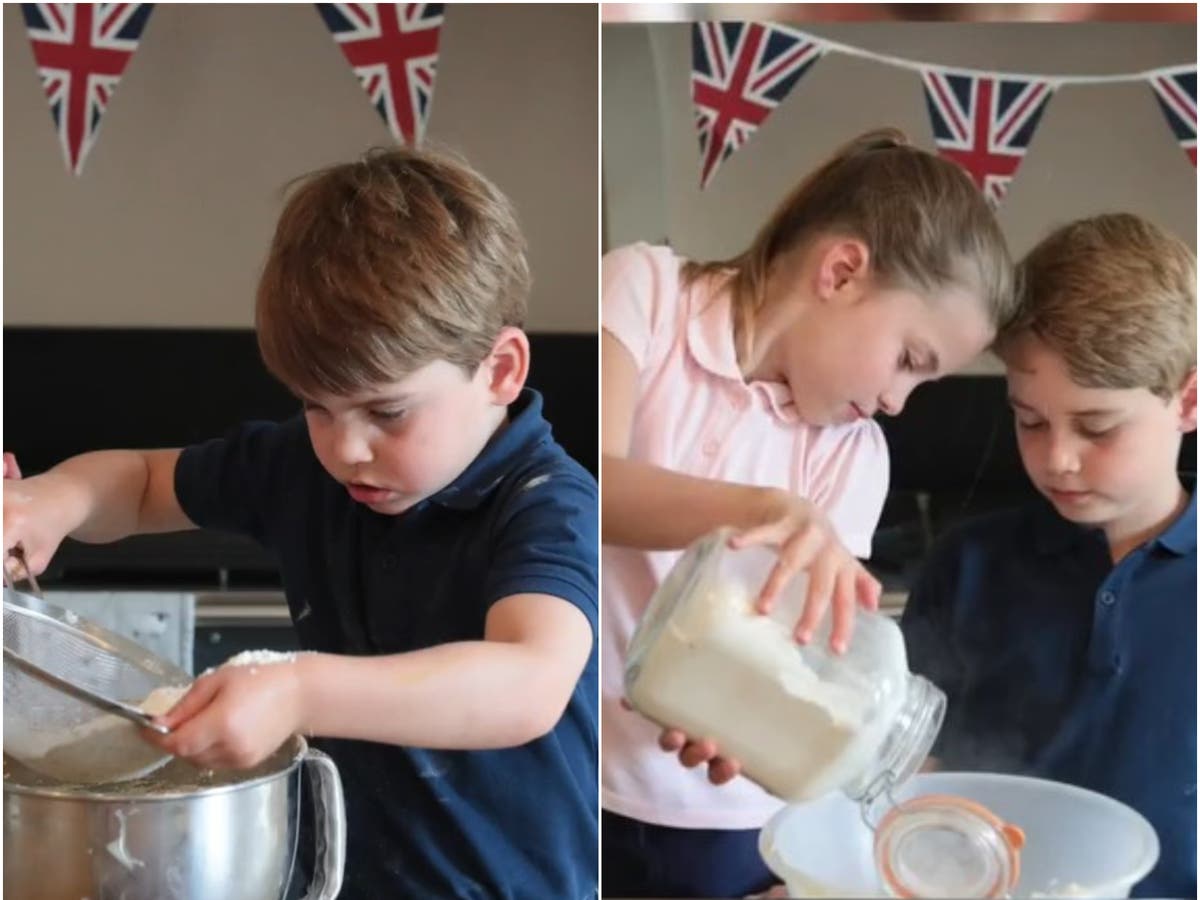 Kate Middleton shared behind the scenes photographs of the baking session in a sweet video posted to Twitter on Sunday 5 June.

Tens of thousands of street parties are set to take place across the UK on the fourth day of the platinum jubilee celebrations, as part of The Big Jubilee Lunch.

The photographs show George, eight, Charlotte, seven and Louis, four, laughing and smiling as they took part in the baking session.

One image shows the siblings huddled around a stand mixer. In another, Charlotte pours flour into a mixing bowl under the watchful eye of George.

The youngest sibling, Louis, is seen carefully sifting flour into the mixer.

Other photographs show the children icing cupcakes with Kate, who cut a casual figure in blue jeans and a red gingham blouse.

George is seen laughing, while Charlotte looks up at her mother and smiles.

“Baking cakes for the local community in Cardiff to enjoy at a Platinum Jubilee street party taking place today! We hope you like them!” the Duchess of Cambridge wrote on Twitter.

On Saturday afternoon, George and Charlotte joined their parents on a visit to Wales to meet with performers and crew who took part in a Platinum Jubilee Celebration Concert at Cardiff Castle.

Where will the Queen be buried?

Charlotte delighted fans by trying her hand at conducting the concert orchestra, giggling and waving a makeshift baton as they played a rendition of “We Don’t Talk About Bruno” from Disney’s Encanto.

The Cambridge siblings have made a number of public appearances during the Queen’s platinum jubilee celebrations.

Louis stole the show during the Trooping the Colour ceremony, as he appeared on the balcony of Buckingham Palace alongside the Queen and other members of the royal family.

Standing next to his great grandmother, Louis pulled several animated faces, covering his ears and screaming into the air. Kate, who was stood behind him, could be seen smiling and struggling to contain her laughter.

David Beckham among guests in Royal Box at Wimbledon today

How To Cope With Daytime Sleepiness

‘The drone corgi has made my year’: Viewers react to light show at Buckingham Palace