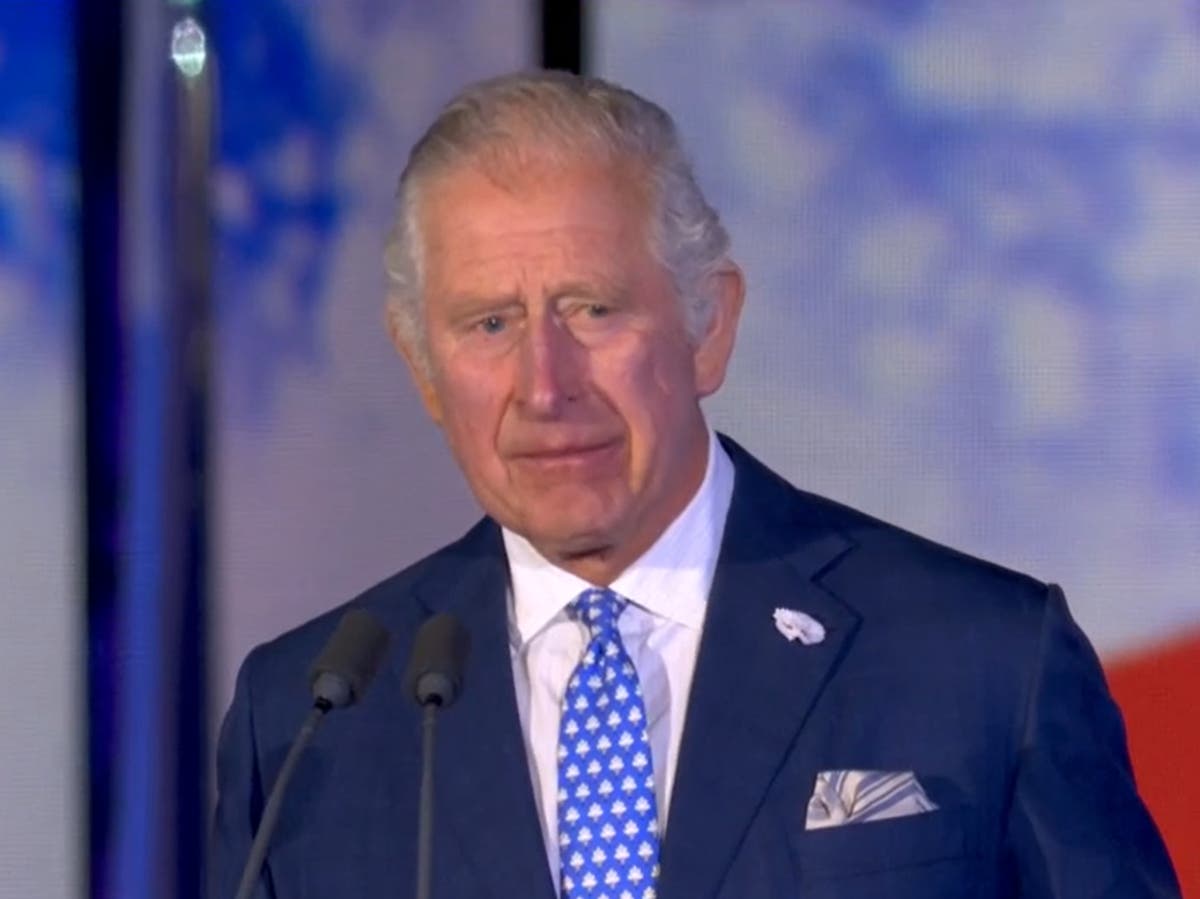 The Prince of Wales has paid a moving, personal tribute to the Queen at the Jubilee Party at the Palace, calling her “Mummy” and thanking her for being there for the nation in good times and bad for 70 years.

Charles, taking to the stage in front of Buckingham Palace, told how the Queen had laughed and cried along with the country through the decades, as he hailed her “lifetime of selfless service”.

Charles said the Queen was watching at home at Windsor with “much emotion” and “immense regret” at not being there.

He rallied the crowd into cheering the absent monarch 20 miles away, saying if they were “loud enough she might, might just hear us”.

The future king, who was joined by his wife the Duchess of Cornwall, said, addressing the Queen, who remains head of state at the age of 96 despite her mobility problems: “You pledged to serve your whole life – you continue to deliver.”

Amongst this weekend’s celebrations, the Queen did not attend the Epsom Derby today after also missing the platinum jubilee thanksgiving service at St Paul’s Cathedral on Friday.

Buckingham Palace confirmed that her Majesty watched the major sporting event on television at Windsor Castle, after experiencing “discomfort” following a busy first day of festivities on Thursday.

‘You have been there for us’: Charles pays tribute to ‘mummy’ the Queen

Prince Charles has delivered a touching speech for his mother’s 70 years of service to the country.

Standing alongside the Duchess of Cornwall, Charles asked the crowd to cheer loudly enough for the Queen to hear 20 miles away in Windsor.

Heir to throne Charles, told how the Queen had laughed and cried along with the country through the decades, as he hailed her “lifetime of selfless service”.

The future king, who was joined by his wife the Duchess of Cornwall, said, addressing the absent monarch, who remains head of state at the age of 96 despite her mobility problems: “You pledged to serve your whole life – you continue to deliver.”

Prince Charles delivers a speech at the party draws to a close.

He said: “You are the head of state, and you are also the mother.

“My papa would have enjoyed the show and joined us wholeheartedly in celebrating all your continue to do for your country and your people.

“Looking back, you will think of red boxes filled with gvvenemt papers at the end of the day.

“How things have changed, we think of all you who have done to make the commonwealth such an important cause of good. And there was still time for fun amidst the work.

“But I know what really gets my mother up in the morning. It’s all of you, ladies and gentlemen.

“All of you watching at home, represented tonight in this great audience.

“Your Majesty, you have been with us in our difficult times, and you bring us together to celebrate moments of pride, joy and happiness.

“You have met us and talked with us, you have laughed with us and cried with us. And most importantly, you have been there with us for these 70 years.”

Prince William makes an impassioned speech about the environment as he also honours his grandmother’s service.

“Our planet has become more fragile. Today, in 2022, as the Queen celebrates her Platinum Jubilee, the pressing need to protect and restore our planet has never been more urgent. But like her, I am an optimist.

“More and more businesses and politicians are answering the call, and perhaps, most inspiringly, the cause is being spearheaded by a united generation across the world.

“Congratutlations to all of them. They won’t accept the status-quo, they wont accept that change is too difficult to deliver.”

“Today the natural world everywhere is changing and in retreat because of what we are doing to it,” Sir David said.

“We can if we wish begin to restore the natural planet.

“And the Queen and her family have been a crucial part in working for the conservbation of our green planet.”

Alicia Keys devotes her song to the Queen

Alicia Keys sings ‘Girl on Fire’ in honour of the Queen and her 70 years of service to the country.

Dame Julie Andrews makes a touching tribute to the Majesty as she thanks her for Her service.

“You were so young when you ascended the throne,” the Sound of Music star said.