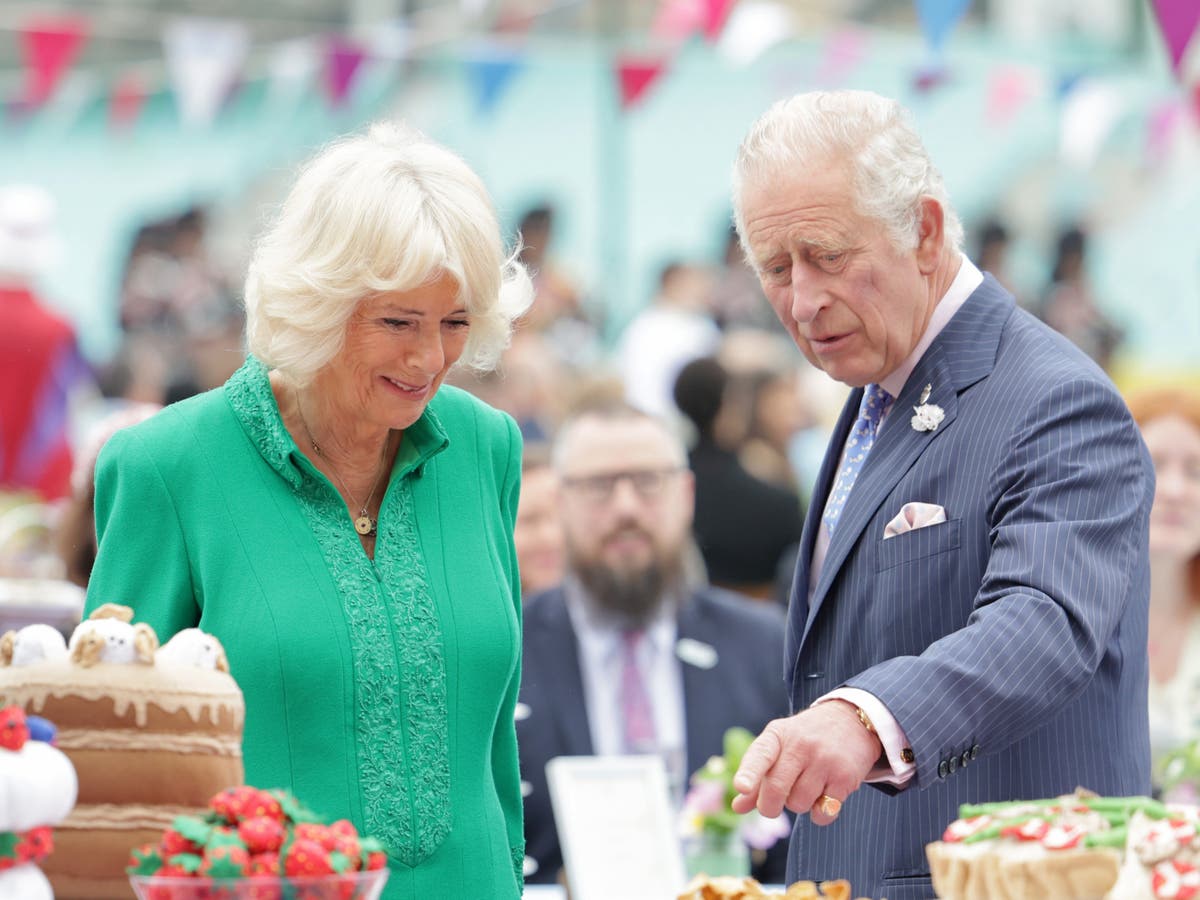 The Prince of Wales and the Duchess of Cornwall have arrived at The Oval to attend a Big Jubilee Lunch in honour of the Queen’s platinum jubilee.

With thousands of street parties set to take place across the UK on Sunday 5 June, the royal couple joined guests for a feast at the cricket ground in London.

Camilla, who is a patron of the Big Jubilee Lunch, arrived in a long-sleeved emerald green dress by Fiona Clare worn under a beige trench coat, while Charles looked smart in a navy-blue pinstriped suit.

Photographs from the event showed the pair admiring a six-metre felt creation by artist Lucy Sparrow.

The artwork is a recreation of a party banquet, made from felt. It includes felt scotch eggs, fruit platters, pavlova, a carrot cake and Viennese whirls.

The felt tea party will later go on display as part of an exhibition at Buckingham Palace this July.

Guests at the event include 70 members and ambassadors of the Royal Voluntary Service, who are being hailed as “platinum champions”.

A snapshot of the menu showed attendees enjoyed a feast of duck eggs and avocado on toast, truffled mushrooms on toasted brioche and Craster kipper pate.

Charles and Camilla cut a huge platinum jubilee celebration cake, decorated with white icing and crown motifs, before raising a toast with a glass of champagne.

The cake was baked by students at The National Bakery School. Big enough to serve 750 people, it was made using 225 eggs and 16kg of sugar, ITV reported.

High-Protein Breakfast: 7 Dal Recipes That Will Give You A Nutritious Punch

Footage from the event showed Charles visiting different tables and stopping for chats with attendees.

Sarah Friar, CEO of neighbourhood app Nextdoor, was among those who met with the heir apparant.

“He said at the end how great it was that everyone comes together this weekend,” Friar said, recalling their conversation.

Friar said Charles had also told her: “When it comes to Monday are we going to go back to all the bickering again? Let’s hope we don’t do that.”

Gemma Snow, from the Eden Project, said Charles had commented on “keeping that togetherness going” following the platinum jubilee weekend.

More than 60,000 people have reportedly registered to host Big Jubilee Lunches across the UK today, which are expected to be attended by approximately 10 million people.

Organisers have created an online interactive map, which can help those wanting to take part in the festivities find a lunch near them.

Hide And Seek to Doga: 6 Interesting Ways To Keep Your Pet Physically Active

When is Diwali 2022 and how is it celebrated?