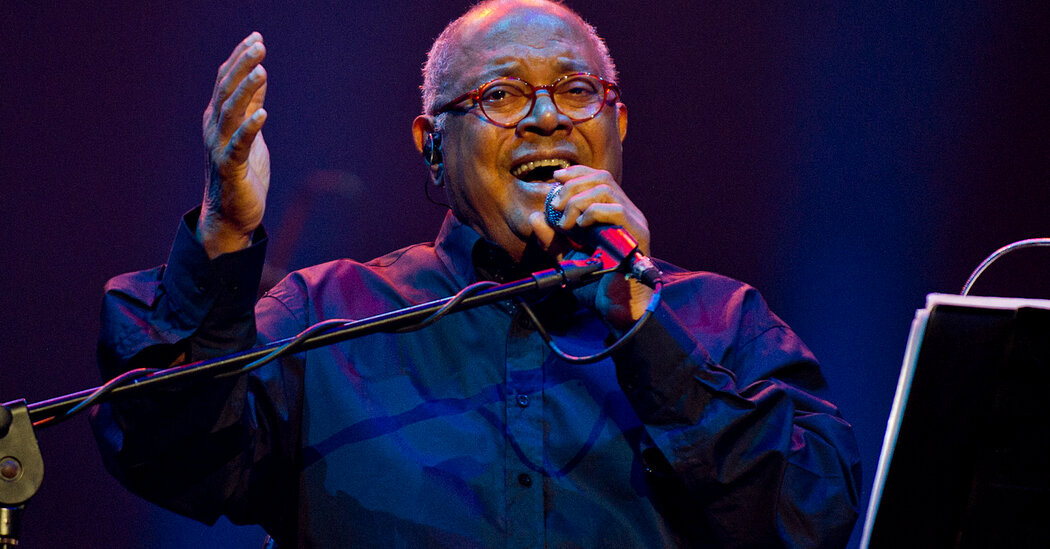 Parents under fire after child filmed ‘running wild’ on flight

Pablo Milanés, a Cuban musician whose blend of folk idioms, pop influences and themes of love both personal and patriotic earned him a reputation as the Bob Dylan of Latin America, died on Tuesday in Madrid. He was 79.

His son Fabien Pisani confirmed the death, in a hospital, and said the cause was myelodysplastic syndrome, a blood disorder.

Mr. Milanés, known to fans as Pablito, was a founding member of nueva trova, a musical movement that emerged in the late 1960s and infused traditional Cuban arrangements with social and political themes.

He wrote songs to accompany the dramatic changes sweeping across Cuba in the wake of the 1959 revolution, making him and the two other founders of nueva trova, Silvio Rodríguez and Noel Nicola, its unofficial troubadours.

“The success of Silvio and Pablo is the success of the revolution,” Fidel Castro said during a reception for Mr. Rodríguez and Mr. Milanés in 1984.

Mr. Milanés’s influence spread beyond Cuba. As the revolutionary tides that swept over Latin America in the 1960s receded in the face of right-wing authoritarians in the 1970s, songs of his like “Yo No Te Pido” and “Cuba Va” became anthems of the continental left, sung in dissident meetings and among exile communities.

“To millions of Latin Americans, Silvio Rodriguez and Pablo Milanés and their guitars are as much a symbol of Cuba and its revolution as Fidel Castro and his beard,” Stephen Holden wrote in The New York Times in 1987.

With his gentle guitar work and a voice poised on the edge between tenor and baritone, Mr. Milanés performed songs that were not, on their surface at least, about class struggle and revolution, but instead about love, longing and the beauty of the Cuban countryside.

In 1970 he wrote one of his most famous songs, “Yolanda,” dedicated to his wife at the time, Yolanda Benet, after the birth of their daughter Lynn.

“This can’t be more than a song/I would like it to be a declaration of love,” he sang. “If you miss me I will not die/If I have to die I want it to be with you.”

Nevertheless, his close identification with the Cuban government made him a controversial figure among Cuban Americans. He recorded almost 60 albums, but until recently they were hard to find in American record stores; those that made it north were often smuggled. He was largely unwelcome in Cuban exile communities, especially in Miami, and radio stations that played his music reported receiving threats afterward.

He toured the United States several times, coming and going with the fluctuations in U.S.-Cuban relations. At a 1987 appearance at the Delacorte Theater in Central Park, a particularly passionate fan mounted the stage midsong, knelt before Mr. Milanés and placed a single red rose at his feet.

“I am a worker who labors with songs, doing in my own way what I know best, like any other Cuban worker,” he told The New York Times after that show. “I am faithful to my reality, to my revolution and the way in which I have been brought up.”

By the 1980s he had established himself as an ambassador of Cuban music. He put the music of Cuban poet-patriots like José Martí and Nicolás Guillén to song. He oversaw the Varadero International Music Festival, which brought leading artists from around Latin America to Cuba. And he released a series of albums that revitalized neglected Cuban musicians and styles, especially those who, like him, were rooted in the country’s Afro-Caribbean culture.

His love for the revolution was not always requited. In 1965 the Cuban military sent him to a forced labor camp; he was one of tens of thousands of artists, intellectuals, priests and gay people deemed potentially subversive by the government.

In the 1990s he founded a nonprofit, the Pablo Milanés Foundation, to promote Cuban culture. It supported artists, published books and produced a magazine, but the Cuban Ministry of Culture dissolved it after less than two years, without official explanation.

He became more critical of the government in recent years, as occasional flare-ups in dissident activity were met with official repression. His stance drove a wedge between him and Mr. Rodríguez, his old ideological compatriot, who remained closely aligned with the government and even signed a letter in 2003 supporting the arrest of dozens of protesters.

Mr. Milanés suffered several health setbacks over the last 20 years and moved to Spain in 2017 to receive medical treatment. He continued to tour Latin America but rarely returned to Cuba, though he did make one last appearance in Havana in June.

Pablo Milanés Arias was born under auspicious signs for a future revolutionary: His birthday, Feb. 24, 1943, was the 48th anniversary of the Grito de Baire, the declaration of Cuban independence against the Spanish in 1895, while his birthplace, Bayamo, in southeastern Cuba, was a cauldron of Cuban revolutionary sentiment.

His father, Angel Milanés Aguilera, was a saddler and leather craftsman for the Cuban army, and his mother, Caridad Arias Guerra, was a seamstress and dressmaker who traded one of her creations for Pablo’s first guitar.

His mother supported him in other ways: When he was still young, she moved the family to Havana, where she entered him in musical contests and sent him to the city’s Municipal Conservatory of Music to study piano.

When he was 12, he encountered a group of street musicians playing traditional Cuban music, and he persuaded his mother to let him leave school to start his career early.

Mr. Milanés was married five times. He is survived by his wife, Nancy Pérez, and their children, Rosa Parks Milanés Perez and Pablo; his daughter Lynn Milanés Benet and son Liam, both with his second wife, Yolanda Benet; his children, Mauricio Blanco Álvarez, Fabien Pisani Álvarez and Haydée Milanés Álvarez, with his third wife, Zoe Álvarez; and his son Antonio, with his fourth wife, Sandra Perez. Another daughter with Ms. Benet, Suylén Milanés, died in January.

In 1965 Mr. Milanés released “Mi 22 Años” (“My 22 Years”), the dewy-eyed lament of a young man who has already seen so much: “Long ago, I longed to find eternal bliss,” he sang. Threaded with Cuban folk and American jazz, it is considered the first nueva trova song.

His international fame grew through the 1970s, alongside the promise and struggle of revolutionaries across the developing world who often looked to Cuba as their ideological lodestar. He sang to Cuban soldiers serving in Angola, and he toured the Soviet Union and Eastern Europe.

He won two Latin Grammys, both in 2006 — one for best singer-songwriter album, the other for best traditional tropical album.

His turn away from the Cuban government coincided with Fidel Castro’s decision to step down that year, to be succeeded by his brother, Raúl, who promised significant reforms. When those promises went unfulfilled, Mr. Milanés spoke out.

“When one thinks of the reforms, you think they’re going to come united with a series of freedoms, such as freedom of expression,” he said in an interview with El Nuevo Herald, a Miami newspaper, in 2011.

But he remained a devotee of the revolutionary fervor of his youth, and he never lost his legions of fans on the left.

When a reporter asked Michelle Bachelet, the left-leaning former president of Chile, in July about a proposed change to the Chilean Constitution, she said it reminded her of a line from one of Mr. Milanés’s songs.

“It’s not perfect,” she said, “but it’s close to what I always dreamed of.”

With ‘How to Change Your Mind,’ Taking a Trip With Michael Pollan

From Kajol to Kareena Kapoor: Celeb inspired makeup looks for for Karwa Chauth 2022

Evan Mock Is Having the Best Time

Parents under fire after child filmed ‘running wild’ on flight