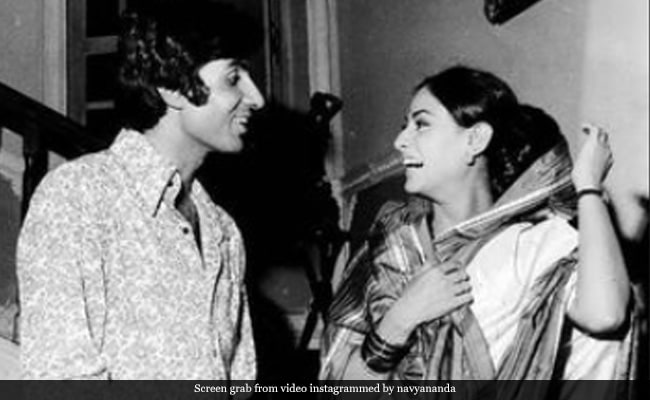 Bollywood celebrity couples have all our hearts. From giving us major couple goals to treating us to glimpses from their love stories, these power couples are worth talking about. Topping the charts are Amitabh Bachchan and Jaya Bachchan. Their relationship has always been a fairytale saga for Bollywood fans. As they complete another year of togetherness, their granddaughter Navya Naveli Nanda has come up with adorable wishes for them. On their anniversary, Navya has shared several photos of her grandparents on Instagram Stories. The first one includes a black and white image where Jaya Bachchan and Amitabh Bachchan are dressed in ethnic clothing. She is hiding her face in her hands while Big B is happily taking her in his arms. The caption read, “Happy anniversary” with a red heart emoji. 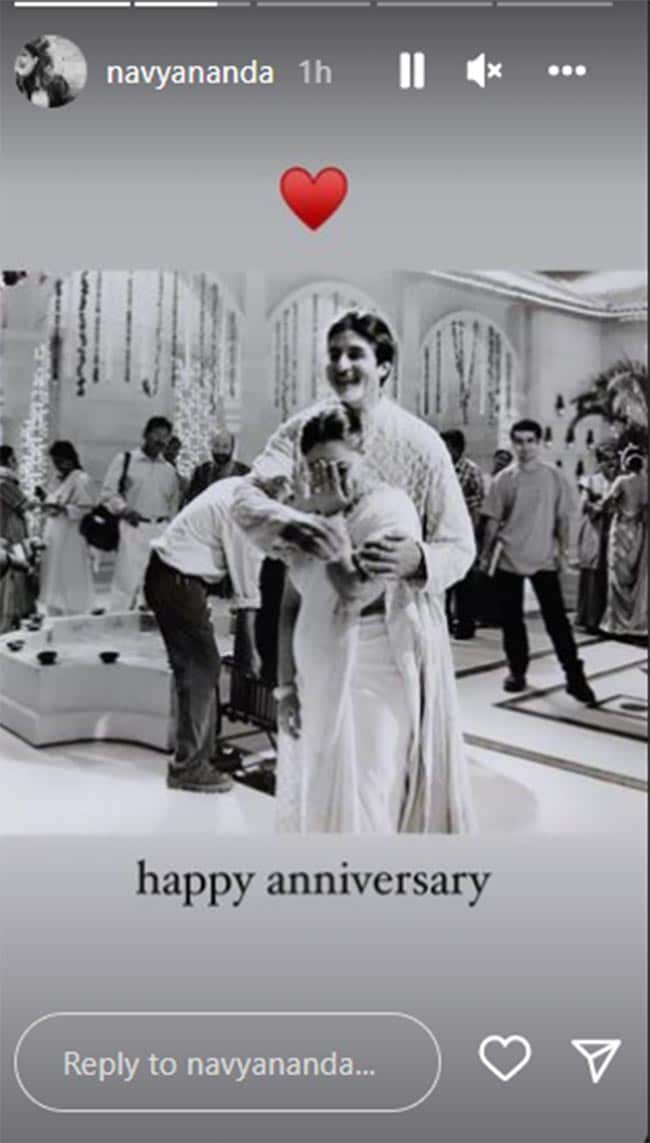 The second photo is from the younger days of Jaya Bachchan and Amitabh Bachchan. In the image, she is wearing a saree, charming us with her resplendent smile while looking at Big B. Amitabh Bachchan is dressed in a floral shirt and smiling while gazing at Jaya Bachchan. Once again, Navya Naveli Nanda added a red heart emoji to the photo. 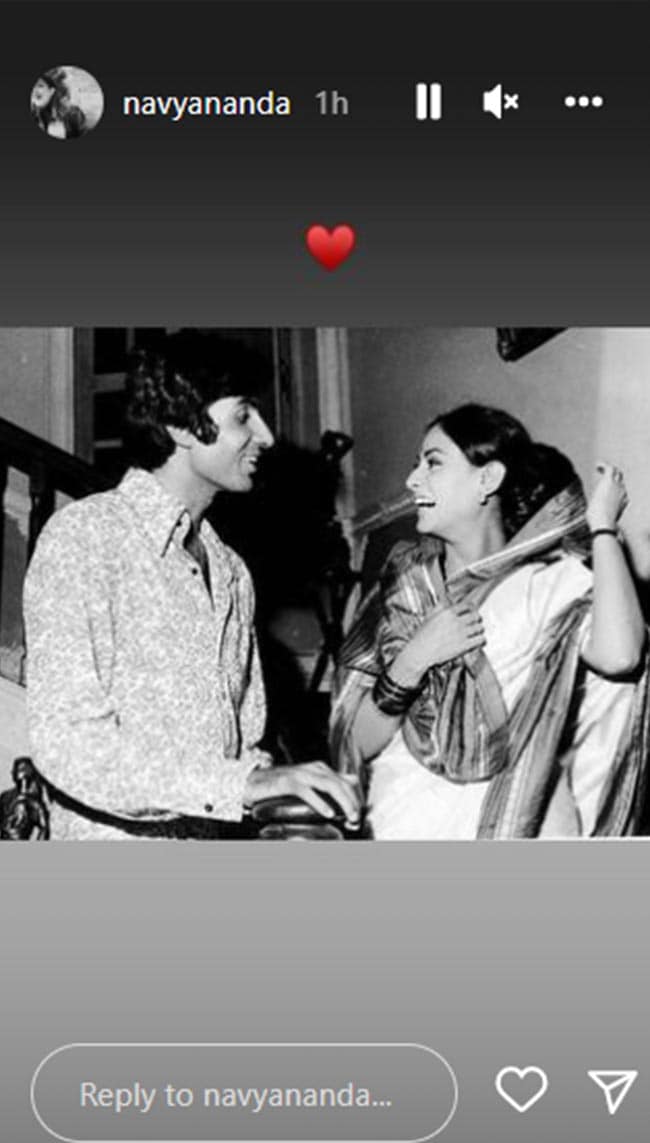 A third photo followed. This is from the current times. In the photo, Amitabh Bachchan is sitting at a table, looking at the camera with a subtle smile. Jaya Bachchan has thrown her arms around his neck and she is peeping from behind with her sweet smile. This time, Navya Naveli Nanda captioned it with a loved-up emoji. Take a look: 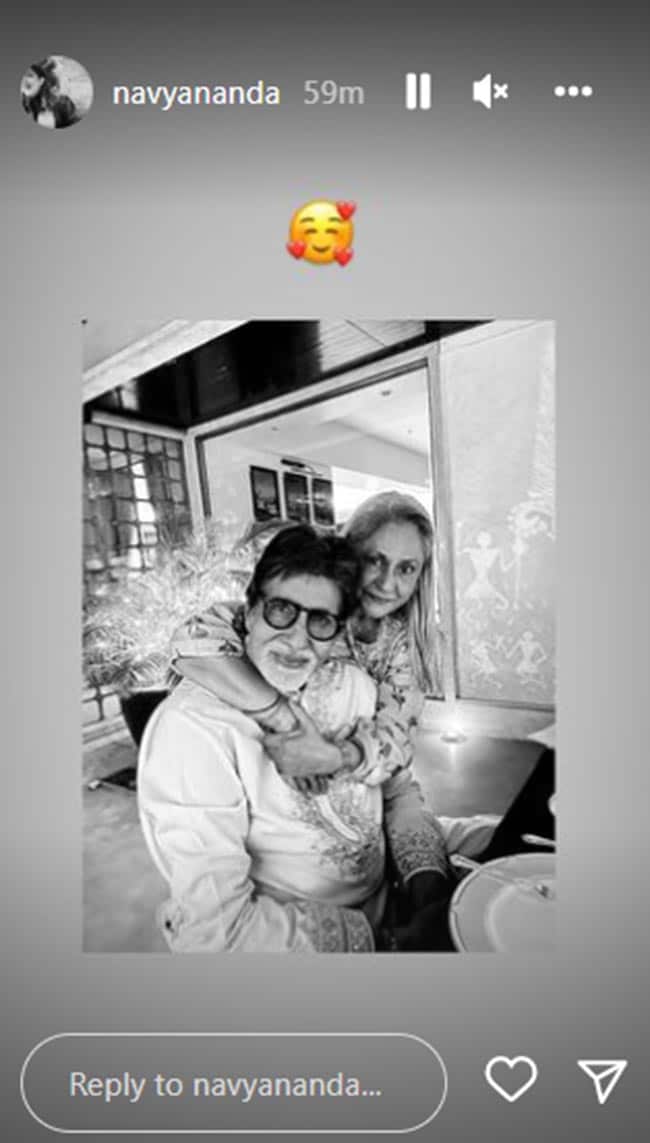 On the day of their anniversary, Amitabh Bachchan too has shared a throwback photo. The veteran actor has dropped a still from their wedding. In the photo, Jaya Bachchan and he are seen amidst certain wedding rituals. She is dressed in red bridal wear. And, Amitabh Bachchan, as always, looks dapper in beige sherwani. The caption was a vote of thanks to all their well-wishers. Big B wrote, “Jaya aur meri vivaah jayanti pe jo sneha aur adar pradaan kiya gaya hai uske liye haath jod kar pranam karta hoon. Dhanyawad. Sabko uttar na de payenge, iss liye daha pratikriya, prativachan, swikar karein [My salutations to the love and care that has been given to Jaya and me on our marriage anniversary. Thank you].

On the work front, Amitabh Bachchan will next be seen inBrahmastra, Uunchai and other films.

What to Know About Jafar Panahi, the Imprisoned Iranian Filmmaker

Amitabh Bachchan Recalls Kolkata Days, Working In A 10 By 10 Room With 8 People

Amitabh Bachchan’s Tribute To Vikram Gokhale And Tabassum: “Days Are Lined With Sadness”