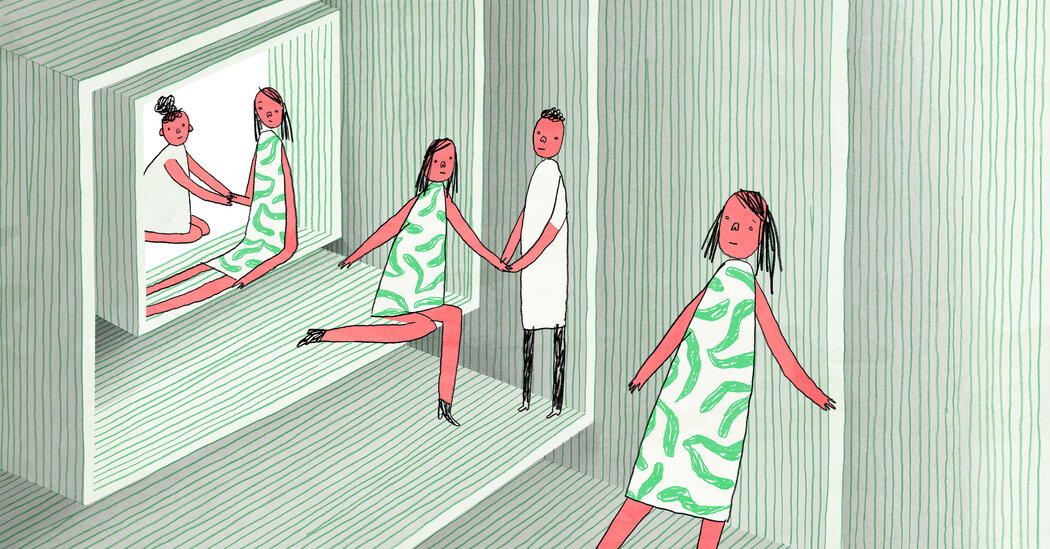 I was dying the morning I met Sarah. I ordered a latte from the campus coffee shop because she had done the same. To make up for it, I starved myself until late that night. Luckily, it had been made with skim milk, not whole, so I was allowed to have dinner.

With a pandemic raging around me and anorexia screaming within, I needed Sarah. She was light personified — golden brown eyes, dangly earrings, stars on her T-shirt, a dimple in one cheek. She texted me after our second date to deem me “kind” and “cute.”

I decided to believe her because I knew I would die if I didn’t.

I didn’t get better all at once. We met in the spring, and the summer was long. I kept up my habit of running five miles every day. I clung to my vegetarianism. I did situps in my bedroom before going to sleep each night.

But Sarah kept telling me I was beautiful and smart and funny. She kept reassuring me that she wouldn’t mind if I gained weight. She coaxed me into the pool of recovery, where she had been swimming laps for over a year. By fall, I had assembled a recovery team of qualified professionals. By winter, I was weight restored. By the next spring, I felt whole.

As I recovered, it was all the room in my life that startled me most. For years, I had been terrified of taking up too much physical space in the world, but once I lived in a body that was the size it wanted to be, emptiness stretched out in every direction.

Eating disorders consume your entire life. I spent every waking moment thinking about food, body and exercise. When the voice of my anorexia quieted, I could think about whatever I wanted. I could fill all that empty space with dreams. The possibilities intoxicated me.

All the while, I fell deeply in love with Sarah. She is the most fiercely kind person I have ever met. She woke up early every Sunday to watch me sing in church. She worked in a nursing home in her spare time. She made a necklace out of seashells for my mother. She crocheted mittens for me when I told her my hands got cold in the winter. She remembered everything I told her. She always put me first.

My recovery culminated in a production of Lerner & Loewe’s “Camelot” in which I played Lancelot, the strongest knight in all the land. I slaughtered hordes of men onstage. The queen fell in love with me. Any audience would have laughed if I had tried to play the role a year earlier at my sickest. Instead, they believed it. The show marked the beginning of my recovered existence.

But “Camelot” also ended my relationship with Sarah. Through playing Lancelot, I met my recovered self for the first time. I also met Josh, who played King Arthur.

Here was a partner, I thought. I was ready for a partner.

It was in a therapy session that I realized why Josh was so important. I said, “I think I have feelings for this person.” And my therapist said, “You need to ask what those feelings reveal about the relationship you’re in right now.”

It wasn’t about being with him. He had a girlfriend of four years. I never fathomed being with him. It was about what he showed me — that my healed self needed a partner and my current relationship wasn’t a partnership.

Even after I recovered, Sarah never stopped showering me in light. She made me long romantic playlists, painted me flowers in watercolors, kissed my knuckles one at a time. In short, she worshiped me. But I slowly realized that being worshiped wasn’t what I needed anymore. It also wasn’t fair to Sarah. I needed to be challenged and Sarah needed to find someone who would revere her in equal measure. The cruel irony was that I could only see that because she had helped heal me.

I was close to death when I fell in love with Sarah, but I was so alive when I broke up with her. I no longer got dizzy when I stood up. My hands didn’t turn blue when I sat still for too long. I ate chocolate whenever I felt like it. I saw cellulite in the mirror and felt nothing.

But it nearly killed me to hurt her.

It took me two tries. The first time, we both cried, then we were kissing, then I was sleeping beside her with our fingers interlaced. She was so kind. She kept throwing light all over the dorm room. It was blinding.

In the morning, we drove through Dunkin’ Donuts. As I handed the cashier my credit card, Sarah said, “If you’re going to break up with me, I need you to do it sooner rather than later.”

I took the doughnuts and parked outside of a dorm building. This time, there wasn’t any realizing to do. I already knew I needed to end things. I had just been putting off the inevitable, hoping I could ride it out until graduation, but that wasn’t fair to her. She had so much to give. I didn’t need to take anymore, and she deserved to receive more.

We ended by hugging. She melted into me in all the places where Josh had held firm, and I knew I had done the right thing. This time was different, more final. We thanked each other then, but let me say it again here: I am so thankful for Sarah. She found me when I was dying. She loved me when I felt unlovable. She told me I was sunlight too until I believed her. Until I was.

Then, another drive-through. A week after I broke up with Sarah, Josh and I got milkshakes. We were good friends who wanted to catch up. We parked outside a dorm building. I turned on the overhead light so his face was painted golden. He was so beautiful. He sucked his too-thick milkshake through a too-thin straw while I realized two things.

The first was that I loved this man. I didn’t think I was capable of loving a man, but there was so much more space inside me now, and here was this man who oozed life, existing so ordinarily in the front seat of my car. He exploded with personhood. His manhood felt incidental.

The second was that I would never be with him. As my therapist had insisted, my love for Josh merely filled the gaps in my relationship with Sarah, and that made it too fragmented to form the foundation for something new. I loved him for all that she wasn’t, rather than what he was.

It wasn’t about Josh. It was about me and Sarah and the things we couldn’t be for each other now that I was recovered. I had never been a healthy adult. Josh, though we were never romantically involved, showed me the type of partner my whole self needed, even if he wasn’t that person for me.

I always thought the purpose of love was to find your forever person, and that every breakup was a failure in that quest. But what Sarah and I had wasn’t broken. It was a place for me to claw back toward life and, later, a place to bloom. I hope the same is true for her. I hope we grew together until we had to grow apart.

I spent four years of my young adulthood as a prisoner to anorexia, trapped in a darkness I plan never to return to. My plane of existence was crowded with food rules and exercise routines, self-doubt and self-loathing. Then came Sarah, who shined her light in all the dark corners of the world my disease created to kill me. Then came Josh, who stunned me with his shadowed humanity and showed me that I didn’t need pure light anymore.

And now there’s just me and all this glorious space.

Gabrielle Union Looks Back at Her Most Iconic Roles

What is the Difference Between Haryali Teej and Hartalika Teej? Here’s All You Need to Know

A Romance Deepened by the Golden Rule