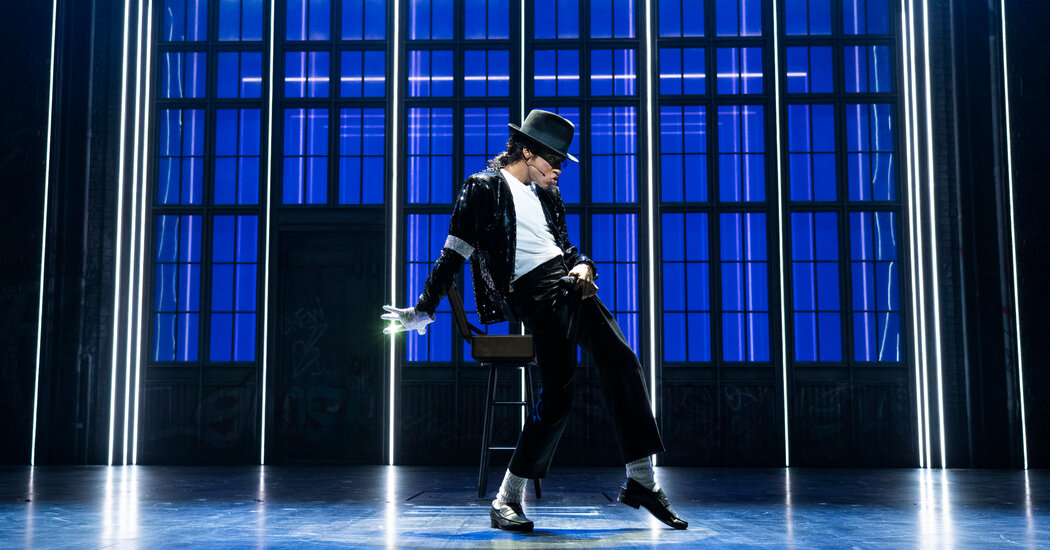 Forget Twitter. This Musk Is Into ‘Toe Curling Yumminess.’

Don’t get me wrong: The musical “MJ” is a misfire on so many levels that it’s hard to know where to begin. “Thriller” looks like a scene out of “Cats.” The segment showing Michael Jackson’s dance influences — the Nicholas Brothers, Fred Astaire, Bob Fosse — is so poor in terms of skill level that I felt sorry for dance, the art form. Irritatingly, yet predictably, the show, directed by the ballet choreographer Christopher Wheeldon, has been nominated for 10 Tony Awards. It will run for ages. Michael Jackson — for all his flaws — is still Michael Jackson.

But the production does have something to show about Jackson’s dancing body in all of its articulate anxiety. It made me think: What happened to that body when the boy became a man? How did his dancing change? Was something of his internal landscape exposed in his dancing for all to see? Did we ever really see it?

When he was alive and building his pop canon of music and dance, it wasn’t always so easy to grasp how, beyond the nervous twitches of the choreography, his spirit was reflected in his dancing. So much about him was wrapped up in the fashion of the moment that you could forget about his body. (You couldn’t, after all, ignore the ever-morphing features of his face.) There were so many distractions along the way — the skin, the plastic surgery, the allegations of molestation against him.

He was always hiding. His costumes were armor, masking his body, his interior life and even, for all of his extraordinary prowess, his physicality. In a sense, he made it possible for his impersonators to exist by crafting and perpetuating a Michael Jackson that anyone could borrow and put on. Like a rhinestone glove. Or a moonwalk.

The Broadway musical tries its best to focus on Jackson, the perfectionist artist, MJ, as the adult Jackson is listed in the Playbill. By contrast, the role of Little Michael makes the adult seem more fragile and more bizarre. (There’s a third Michael, too, in between them in age; he makes less of an impression.) You can’t help but notice the dramatic, drastic changes that his dancing body displayed over time. From his childhood as the youngest brother in the Jackson 5 to the final rehearsals for his Dangerous tour of 1992, the moment that frames the show, we see the way turmoil ripples through his body. For Little Michael, tormented by his father, dance is an escape; for the older MJ, it’s a way for his body to scream in ways he couldn’t with words. His voice, high and whispery, never had the same emphatic force.

The older MJ, in the show, fights for rigid precision — movement phrases are knotty, spiky, full of angles, while Little Michael is smooth and enviably relaxed. (Obviously, dance styles changed drastically during that time, but the contrast seems as emotional as it is physical.) Two young boys alternate as Little Michael, Walter Russell III and Christian Wilson. I can only speak for Wilson, whose performance I saw, but it was his dancing that repeatedly snapped me back to attention.

This year’s awards, the first to recognize shows that opened after a long Broadway shutdown during the pandemic, will be given out on June 12.

As a musical, “MJ” can feel as distant and as inaccessible as a music video. Wilson’s presence — his ease, his winning blend of naïveté and wisdom — brought it to life. Even during the curtain calls, his hips kept flowing, perhaps more quietly, more internally than when he was in character, but he never lost hold of his gentle yet powerful groove.

That unselfconscious fluidity throws into relief the rigidity and the constraint of MJ, as played by Myles Frost. Frost’s dancing accuracy is extraordinary; it reveals a body turning in on itself and hardening — lonely, brittle, concave. The tipped hat and rounded shoulders weren’t just about Jackson imitating one of his idols, Bob Fosse. Weren’t they also a way to hide (and guard) himself from the world?

Jackson’s music was pop, but the way he used his body had such a hard edge that to watch footage of his actual Dangerous tour is to see something related to punk — not in sound, but in angst and speed, anger and attack. The tone is confident and clipped, but beyond the gleaming exterior, you sense pain. Did he even want to move in front of people? I can’t decide. At the start of a performance in Bucharest, he stands still, in profile, with his arms tense at his sides, for what seems like ages while the camera pans to a crowd on the brink of hysteria.

It’s impossible to know who Jackson really was. “MJ” delivers yet another impersonation of the man we saw onstage and in videos. Often a dancing body reveals a certain truth about a person, but in Jackson’s case dancing might have been one more thing to hide behind, like another costume; it was a place he could control his body. He could be himself or the person he wanted to be: strong, powerful, sexy. Maybe the dancing body was the man, or his fantasy of himself.

I don’t want to honor the choreographic approach in “MJ,” which is mostly cartoonish. But watching the dancing left me thinking about Jackson and what dancing became for him — something he was chained to, rather than a way to break free of the box he found himself in.

The 2022 nominees. The race for best new musical at the Tony Awards — traditionally the most financially beneficial prize — is a broad six-way contest this year. Here’s a closer look at each nominee:

“MJ” This biographical jukebox musical follows Michael Jackson as he prepares for a world tour, but it sidesteps the sexual abuse allegations against the pop star.

“Six: The Musical” This British pop musical about the wives of Henry VIII mixes 16th-century marital politics with 21st-century selfies and shade in a sing-off among six sassy divas.

There is also another musical on Broadway, “A Strange Loop,” in which the main character’s dancing body is tied to his psyche. Directly. The choreographer responsible for it, Raja Feather Kelly, was left out of contention for a Tony Award. At the same time, Wheeldon of “MJ” is nominated for best choreographer, but with no mention of Rich and Tone Talauega, two brothers who danced with Jackson and created Jackson’s movement in the show.

Kelly is a bewildering omission: His intricate choreography is a sparkling, distinct part of what defines Usher, the main character, in the Pulitzer Prize-winning musical by Michael R. Jackson. (Yes, the name thing is weird, too.)

There are plenty of dance moves in “A Strange Loop,” but there’s also something more nuanced: the choreography of behavior. Everything the characters say and do has been treated with a gesture or with a movement phrase, rendering it not only multilayered and original, but wholly virtuosic as gesture slides in and out of recognizable dancing.

In “Intermission Song,” Usher (Jaquel Spivey) is surrounded by this thoughts, six performers who act out his worries as he creates what he refers to as a “big, Black and queer-ass American Broadway” show. A dance break puts them in motion. They may hit the same accents, but they act as individuals. Toward the end of “Memory Song,” they lift their arms — slowly, purposely while keeping the rest of their body still. It’s balletic, as reverent as the opening prayer in George Balanchine’s “Mozartiana” and a choreographic feat built on a grace and tension born from control. It’s about their dancing bodies. The show wouldn’t be the same without it.

While the dances in “MJ” feel, to a large extent, like facsimiles of videos, “A Strange Loop” brings up, once again, the question of what choreography is and what it can be. If Kelly’s approach is subtle, there’s a reason for it: Michael R. Jackson’s expression of queerness, big and Black, lives in both the mind and the body. The choreography is intentional; it’s part of the fabric of each character. It not only unlocks the potential of dance in musical theater, it expands how a story can be told.

Dan Bongino: I am done with Biden’s ‘blame game,’ he simply can’t take responsibility for anything

Nakedness Is Everywhere in Fashion, Even the Heel of a Shoe

I Found Condoms in My Son’s Room. What Should I Do Now?