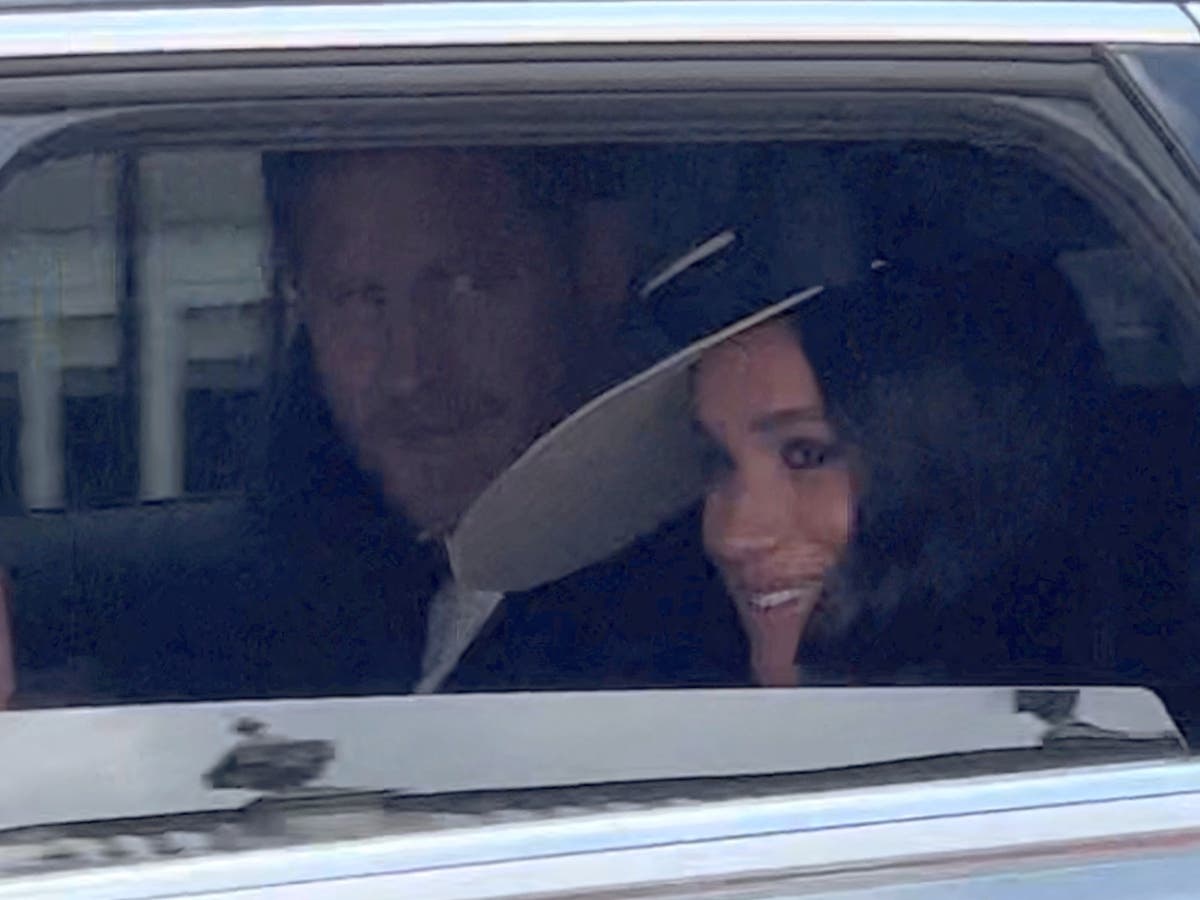 Fans have praised Meghan Markle for playing a shush game with a few royal children, while in London for the Queen’s Platinum Jubilee celebrations.

Alongside her husband Prince Harry, the Duchess of Sussex sat in the Major General’s Office to watch the Trooping the Colours parade on Thursday.

In photos obtained by the Daily Mail, Markle was seen smiling and laughing with Peter Phillips’s daughters, Savannah, 11, and Isla, 10, and Mike and Zara Tindall’s children, Mia, eight, and Lena, three.

Aside from talking with the royal daughters, Markle also playfully told them to quiet it down during the event, as she put her finger towards her mouth.

The photos taken at the parade also showed her husband shushing his three-year-old cousin, Lena Tindall.

Both the Duke and Duchess of Sussex’s gestures echoed an old photo of Prince Harry from 1990. In the image, the then five-year-old shushed his cousin Princess Beatrice, who was two-years-old at the time, by placing his hand over her mouth.

On social media, fans have applauded Markle for her kind manner at the Jubilee celebration, since she appeared to be having fun with the children.

“Meghan is so cute and looks so stunning,” one Twitter user wrote.

“They are laughing because Meghan is playful and they clearly love her,” another added.

Some fans also noted how Markle could know how to communicate with children in such a kind way because she’s a mother herself, as she shares a three-year-old son, Archie, and 11-month-old daughter, Lilibet, with Prince Harry.

“When an adult has children surrounding them and they’re so engrossed into what they’re saying by looking happy and relaxed that shows there’s an element of trust and love that a child has in that adult,” one wrote. “#MeghanMarkle inner motherhood is glowing & children can see that In her.”

“AKA navigating the best route forwards,” another added. “Playful yet discreet, if it makes the Queen happy to see her great grandchildren in her 70th Jubilee year, let’s not spoil it for her.”

Fans were also amused by the Duke’s gesture towards the children, one of which tweeted: “Fun uncle Prince Harry who is trying to shush this little cherub (but looks like he is going to burst out laughing)!!

Markle and Prince Harry arrived in the UK this week and have been living in the US for the last two years, since stepping down from their royal duties in 2020. This was the duchess’ first royal appearance in two years.

At the parade on Thursday, Markle wore a navy, off-the-shoulder dress and a white hat with a bow that is thought to be designed by British milliner Stephen Jones.

After the parade, fans noticed how Markle’s dress looked familiar and began to speculate if it was the same outfit that she had worn in 2018, ahead of her royal wedding.

Fans also fawned over her white hat, which was already sold out of stores only hours after her Platinum Jubilee appearance.

Follow for live updates from the Platinum Jubilee 2022 here.

WaPo opinion piece calls for Biden to not run for reelection in order to save Democrats: ‘Quit, Joe, Quit!’

Before chickens became food for people, they were regarded as special exotica

Exclusive: Excerpt from Amish’s ‘War of Lanka’ – Times of India

‘The Phantom of the Open’ Review: ‘The World’s Worst Golfer’ Wins Laughs

‘Crimes of the Future’ Review: The Horror, the Horror