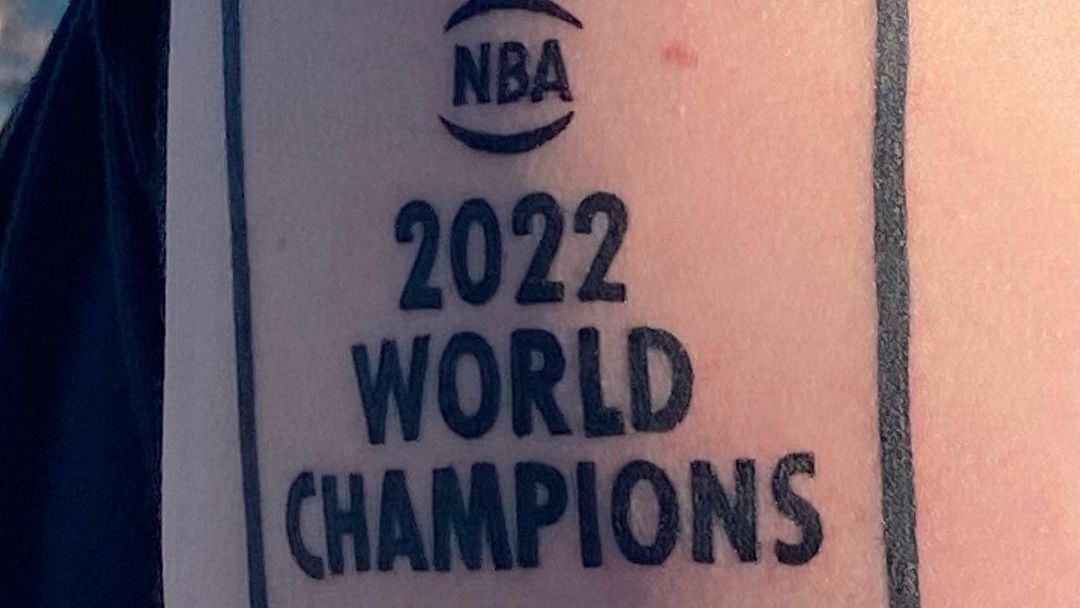 The Boston Celtics are back in the NBA Finals for the first time since 2010, facing the Golden State Warriors. But long before Game 1 on Thursday (9 p.m. ET on ESPN), one fan decided to get a tattoo celebrating something he felt was just a matter of time: Boston Celtics, 2022 world champions.

A huge Celtics fan, Jack Bienvenue, 18, of Wellfleet, Massachusetts, got a tattoo of a championship banner his team hasn’t even won yet. Asked why he decided to get the ink, Bienvenue points to the bounce-back the Celtics had over the second half of the season.

“It was March 21st, the exact day. We were on a winning streak of 10 games I guess. We were rolling a bit,” Bienvenue said. “It seemed like we were finally getting the pieces together. We were finally putting the puzzle together, and I thought it seemed like [a title] was destined to happen. That this team would make a historical run to the Finals, which they have, and just gotta finish the job. We got four more to win.”

Bienvenue’s friends were shocked at the ink on his left arm.

“Everyone was like … ‘this guy is crazy,'” Bienvenue said. “Of course, I thought it was a little crazy myself. It was definitely a shock to most of my friends.

“It was kind of a spontaneous idea, too. I didn’t even have the whole thing planned out. I was already thinking about doing something for a Boston tattoo. I knew this artist and I wanted to do it, then I just called him and said, ‘I had a great idea for a tattoo, I’ll be right there after school.’ So I drove there. It didn’t even take me a little to convince him to put it in my arm.”

Golden State is the favorite to win the series.

It will be only the second time the Warriors and Celtics have met in the NBA Finals. The last time was 1964, when Golden State was called the San Francisco Warriors and led by Wilt Chamberlain. On the other side, Boston was led by Bill Russell and coming off five titles in a row. The Celtics won that series 4-1.

The Boston Celtics and Golden State Warriors are set to meet with the NBA championship on the line. You can catch all the action on ABC and the ESPN app.

Bienvenue, of course, believes that the Celtics will win this season, but not easily.

“I’ll say Celtics in seven. It’s not going any less than six games,” he said. “It’s going to be a very fun series to watch, very competitive. Steph Curry wants to keep his legacy and Jayson Tatum wants to kind of get his to start. It will be a battle for sure.”

Lucas Cunha contributed to this report.

Britney Spears: Is it time to reconsider the singer’s legacy?