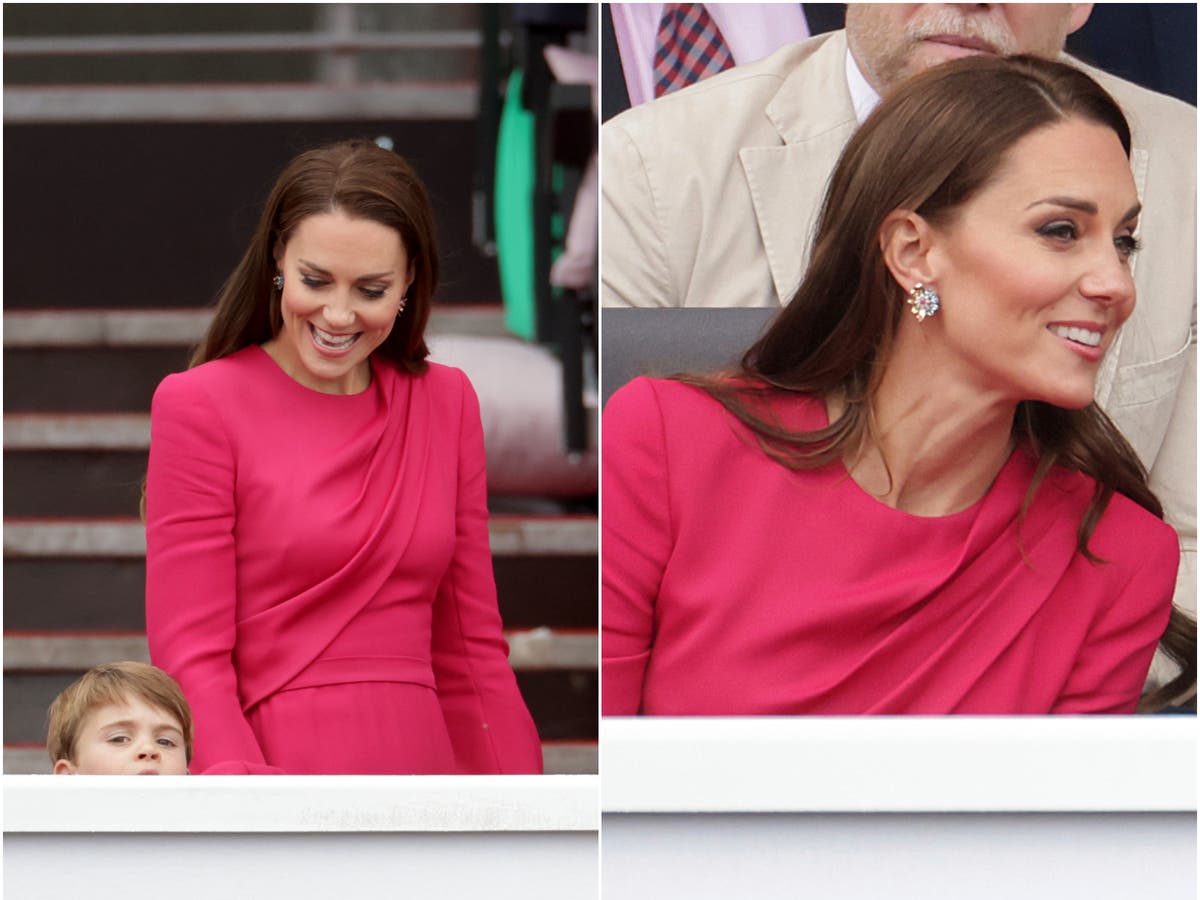 The Duchess of Cambridge has taken her place in the royal box to watch the Platinum Jubilee Pageant, alongside the Duke of Cambridge and their three children.

The design features padded shoulders, ruching on one shoulder and puffed long sleeves.

The duchess completed the look with simple gold and diamond earrings, natural makeup and her hair in loose curls.

While George is matching Prince William – both are dressed in suits – Louis looks smart in a buttoned-down black coat with a peter pan collar.

Sitting in between her brothers, Charlotte is wearing a smart cream coat.

The Platinum Jubilee Pageant marks the conclusion of this weekend’s festivities in honour of the Queen’s 70-year reign.

The spectacle began with the Queen’s Gold State Coach being drawn along The Mall by horses and The King’s Troop.

A hologram depicting the Queen waving at spectators from her coronation in 1953 was projected onto the side of the coach.

More than 10,000 people are taking part in the pageant, which is comprised of four acts that aim to tell the story of the Queen’s historic reign.

Those taking part include members of the military, more than 6,000 volunteers, theatre performers, key workers, and 2,500 members of the general public.

The pageant marks the fourth public appearance from the Cambridge children during the platinum jubilee weekend.

Going Where the Wind Blows in Italy’s Salento

On Saturday evening, George and Charlotte accompanied their parents to the Party at the Palace.

The children were seen smiling and laughing as they watched a skit of the Queen, their great-grandmother, having tea with Paddington Bear.

They were also seen clapping and singing along to the various musical performances, including Rod Stewart’s rendition of Sweet Caroline.

The young royals also took part in a baking session with their mother, to make cupcakes for those attending a jubilee street party in Cardiff today.

Kate shared photographs of the family baking together on Twitter.

One image showed the siblings huddled around a stand mixer. In another, they smiled and giggled as they helped their mother ice the cupcakes.

Where is Love is Blind season 3 based and filmed?

Best trades on CNBC Monday: Pros are adding these alternative growth names instead of megacap tech

5 Theories About Those Deaths In ‘The White Lotus’ Season 2

Alzheimer’s disease symptoms: The signs which may indicate the early stages | The Times of India