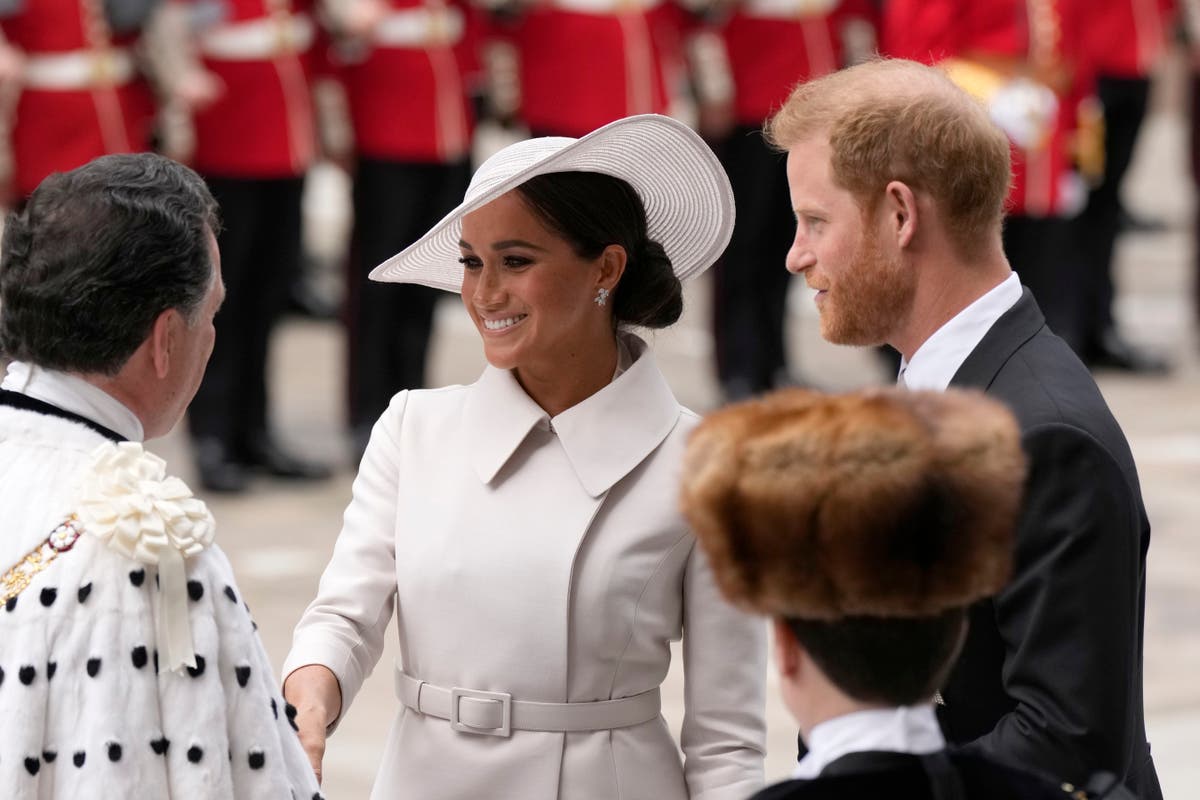 The Duke and Duchess of Sussex have arrived at St Paul’s for the special service of thanksgiving for the Queen’s Jubilee this morning.

Harry and Meghan were cheered by the crowd as they embarked on their first royal engagement since they left the UK for a new life in the US two years ago.

The Prince of Wales has also arrived and is set to represent his mother after the 96-year-old monarch pulled out of the high-profile occasion at St Paul’s Cathedral in London.

She suffered “discomfort” following a busy first day of festivities on Thursday, including a double balcony appearance and a beacon lighting.

The Queen, 96 and facing ongoing mobility difficulties, will be watching the ceremony on television on Friday as she rests at Windsor Castle.

Tributes will be paid to the Queen’s “70 years of faithful and dedicated service” as 2,000 people fill the historic church.

Public service is the theme of the event, with 400 people who are recipients of honours, including NHS and key workers who were recognised for their work during the pandemic, invited.

Boris Johnson was booed by the crowd outside St Paul’s Cathedral as he arrived for the Queen’s Platinum Jubilee service.

The public could be heard jeering and whistling as the prime minister walked up the steps with his wife Carrie on Friday morning.

Many of the senior political figures – included former Tory prime minister David Cameron and Labour London mayor Sadiq Khan – were cheered by the crowd behind the barricades.

Carrie Johnson has arrived at St Paul’s Cathedral for the service of thanksgiving marking the Queen’s Jubilee on Friday.

The fitted frock featured long sleeves with padded shoulders and a flared skirt that fell to Carrie’s calves.

Prince Charles arrives with his wife Camilla. He will take the Queen’s place at the Jubilee service of thanksgiving.

The Duke and Duchess of Cambridge arrive

Kate and William were met with a huge cheer as they arrived at St Paul’s. The couple are popular with the UK public, with opinion polls putting them behind the Queen in terms of popularity.

A smiling Duke and Duchess of Sussex have arrived for their first royal engagement since they left the UK. There was a mixture of boos and cheers for the couple.

A number of royals arrive by coach

The first smattering of members of the Royal Family have arrived by coach. This includes Mike and Zara Tindall.

The bells are chiming…

The bells are ringing at St Paul’s Cathedral so the Royal Family’s arrival is imminent.

15 Designer Bands To Give Your Apple Watch an Ego Boost

Justin Rose withdraws from The Open

Why Black Americans are leaving Biden in droves

Janhvi Kapoor’s Vibe Was “Really Killed” By The Blower

Jeff Bezos To Give Away Most Of $124 Billion Wealth During Lifetime: CNN