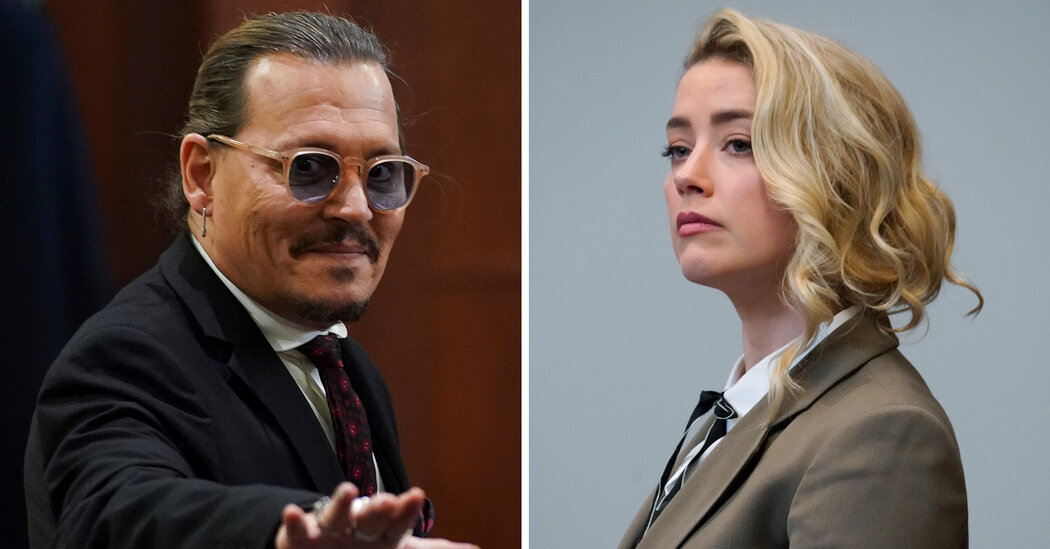 Ms. Heard’s lawyers sought to impress upon the jury that even though the defamation trial centered on lurid details of alleged spousal abuse, Mr. Depp’s lawsuit was ultimately about what one called “one piece of paper.”

His case revolved around Ms. Heard’s 2018 op-ed in The Washington Post, headlined, “I spoke up against sexual violence — and faced our culture’s wrath. That has to change.” The article, which did not mention Mr. Depp’s name, carried Ms. Heard’s byline, but there were many more people involved in the article.

Early drafts of the op-ed were prepared by the communications department of the American Civil Liberties Union and honed through back-and-forth emails with Ms. Heard’s lawyers, said Terence Dougherty, the A.C.L.U.’s general counsel. Shortly before the op-ed was published, Ms. Heard was appointed an A.C.L.U. ambassador with a focus on women’s rights and gender-based violence.

During a video deposition played to the jury during the trial, a lawyer for Mr. Depp read emails from the A.C.L.U. explaining how the op-ed came to be. An email from a communications department employee there suggested that Ms. Heard write an article about how victims of gender-based violence “have been made less safe under Trump and how people can take action,” and noted that Ms. Heard could weave in her personal story.

Another A.C.L.U employee sent a first draft of the op-ed to Ms. Heard, and during the editing process with her lawyers, mention of her marriage and successful application for a temporary restraining order were excised, Mr. Dougherty testified. In the end, Ms. Heard referred to herself in the op-ed as a “public figure representing domestic abuse” — a phrase at the center of Mr. Depp’s lawsuit.

In an email from one A.C.L.U. employee to another, which a lawyer for Mr. Depp read during questioning of Mr. Dougherty, the employee noted that Ms. Heard’s lawyers had taken out “some of the stuff that made it really powerful.”

“I think that Amber’s contributions to the portion of the op-ed that talks about personal experiences is part of what informed the view that this was a strong op-ed,” Mr. Dougherty testified.

Mr. Dougherty said that the publication of the op-ed was timed to coincide with the release of the movie “Aquaman,” in which Ms. Heard had a starring role. Ms. Heard said this timing was not to promote “Aquaman” but to use the movie to promote the issues discussed in the article, which included advocating a bolstered Violence Against Women Act and against the Trump administration’s policies around adjudicating sexual assault on college campuses.

The A.C.L.U.’s founding principles were free speech and civil liberties, but in recent years it has become more involved in progressive causes, fueling internal tensions over whether it has strayed from its original focus on First Amendment issues.

Ms. Heard’s lawyers argued that Ms. Heard had a right to discuss her experiences with spousal abuse and that it was undisputed that, in 2016, she became a “public figure representing domestic abuse” when she was granted a temporary restraining order against Mr. Depp after reporting assaults by him to a court.

Mr. Depp’s lawyers asserted that the article made clear allusions to Ms. Heard’s prior accusations — which Mr. Depp denied — and that they were central to the piece’s relevance. The three portions of the op-ed that were at issue in the defamation case included the headline, which Ms. Heard and the A.C.L.U. said they were not involved in; the sentence about her being a “public figure representing domestic abuse”; and a later passage about seeing “how institutions protect men accused of abuse.”

“The A.C.L.U. and Ms. Heard were conspiring to make it very clear that those three statements were related to Mr. Depp because otherwise nobody had any interest in the article,” a lawyer for Mr. Depp, Benjamin Chew, argued in court.

The A.C.L.U. was not named as a defendant in the case.

After Ms. Heard was granted a $7 million payment in her divorce settlement with Mr. Depp, she pledged half of the money to the A.C.L.U. Mr. Depp’s lawyers have sought to undermine Ms. Heard’s credibility by showing that she paid a fraction of the $3.5 million she had pledged to the A.C.L.U. Mr. Dougherty testified that Ms. Heard stopped payments because she ran into financial difficulties, which Ms. Heard testified were a result of Mr. Depp’s legal proceedings against her.

When is World Kindness Day 2022? Theme, History and Significance