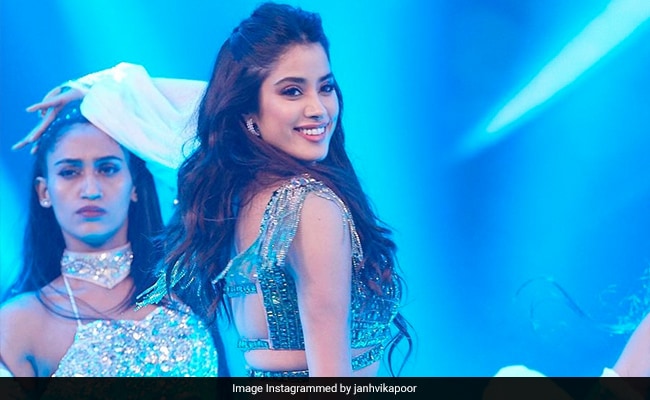 Did You Know Consuming This Natural Juice Could Promote Faster Hair Growth?

Janhvi Kapoor’s penchant for dancing is evident in her social media posts. She has also been vocal about her love for acting and all things cinema. So, it is only natural for her to love being on stage and in front of the camera, entertaining millions of fans. In a new post on Instagram, she spoke about it and wrote, “2 favourite places in the world, in front of the camera and on stage.” The note is attached to a series of images in which she is seen performing at an award show in Dubai. Along with the pictures of her performance, Janhvi also shared some images of her getting ready for the show. Also, do not miss the photo of her in shorts and a nightshirt with a full face of makeup. The photo carousel ends with a video of Janhvi, dressed in a green and red ensemble, waving at the camera. Behind the video is Janhvi’s brother Arjun Kapoor who says, “You look like the Statue of Liberty with red velvet.”

Before that, Janhvi Kapoor shared another set of pictures from Dubai, looking ethereal in a gown. In the caption, she said, “Thank you for such a fun night, Dubai.” Replying to the post, Janhvi’s sister Anshula Kapoor said, “Love,” with heart-eye emojis. Janhvi’s rumoured boyfriend Orhan Awatramani wrote, “Ya Allah”, and added fire and hot face emojis.

Janhvi Kapoor, previously, shared another high-fashion look that she picked for an awards night. Sharing the inspiration behind the Falguni Shane Peacock ensemble, Janhvi said, “The vision was Botticelli’s Venus meets The Little Mermaid.” For the unversed, The Birth of Venus is a painting by Italian artist Sandro Botticelli, while Little Mermaid is a fairy tale character.

On the work front, Janhvi Kapoor was last seen in Mili. It is a remake of the Malayalam film Helen. Her upcoming projects include Bawaal and Mr And Mrs Mahi.

Eagles stave off Texans, move to 8-0 for first time in franchise history

‘Meghan Markle needs to find she cares about’

Janhvi Kapoor Gives A Tour Of Her Chennai Home, Bought By Mom Sridevi

Janhvi Kapoor to Sidharth Malhotra; Celebs Who Stole the Spotlight at Award Event

Janhvi Kapoor Made This Viral Meme Template Her Own. See ROFL Post