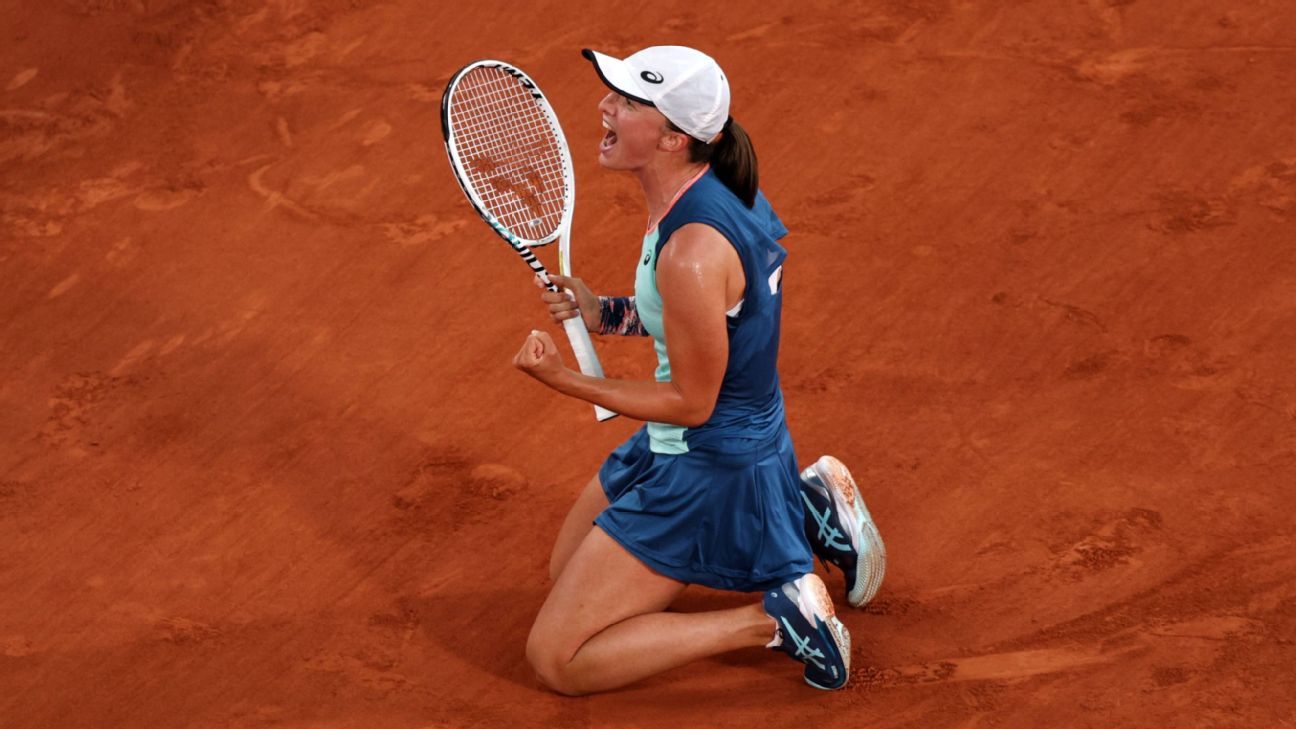 On Saturday, her blistering, athletic play dismantled teenage phenom Coco Gauff, 6-1, 6-3, and Swiatek emerged as the women’s singles champion at the 2022 French Open.

She took the first four games of the match — and never looked back.

It marked Swiatek’s second major title and her 35th straight victory — tying her with Venus Williams for the longest WTA winning streak of this millennium.

“To have that kind of streak, I needed everything,” she told NBC’s Maria Taylor on Saturday. “I needed to be there mentally, [and also] physically to be ready because I had many long matches during all this time. Tennis-wise, I needed to be more aggressive, and I finally realized how to do that. It’s all coming together.”

Swiatek, who turned 21 earlier this week, won five titles this year before the French Open, including four at the 1000 level. She took over the No. 1 ranking in early April and now has nearly twice as many points as anyone else.

“What you’ve done on tour the past couple of months has truly been amazing, and you totally deserve it,” a tearful Gauff said during the on-court trophy presentation. “Hopefully we can play each other in more finals and I can get a win over you one of these days.”

When Swiatek arrived in Paris two years ago, she was a virtual unknown. She entered the tournament ranked No. 54 but stunned the field and left as the champion.

Less than two years later, Swiatek leaves Paris as the dominant force in women’s tennis, and one who is poised for future greatness. It seems as though the WTA has found the elusive superstar talent who can consistently contend for major titles on different surfaces — and do what so few have been able to do since Serena Williams was in her prime.

“She’s kind of hit another level than all of us right now,” said Jessica Pegula, who lost to Swiatek in the quarterfinals. “Yeah, it’s a little scary.”

Fear is not an unusual emotion for Swiatek’s opponents these days.

Before play got underway in Paris, Naomi Osaka, a four-time major champion, told reporters she had a dream in which the draw came out and she had to play Swiatek in the first round.

“I was scared because I was thinking, like [who’s] the worst possible player to play when I’m unseeded,” Osaka said. “She came in my mind. Thank God that didn’t happen.”

To put Osaka’s nightmare more succinctly: “Any contender to win this championship wanted to be in the bottom half of the draw and away from Iga,” said 21-time major doubles champion and ESPN analyst Pam Shriver.

Lesia Tsurenko, a former US Open quarterfinalist, drew the shortest straw. She faced Swiatek in the opening round and lasted just 54 minutes on court in a 6-2, 6-0 rout. The rest of Swiatek’s opponents didn’t fare much better.

Swiatek dropped just one set — to 19-year-old Qinwen Zheng in the fourth round — en route to the final. She lost just eight games in total to Pegula and Daria Kasatkina, in the quarterfinals and semifinals. Both matches took less than 90 minutes.

“I think her athleticism is very off the charts,” Pegula said ahead of their match. “I think her defense is really, really, really good, kind of similar to like an Ashleigh Barty where they have offense and defense, they can get in the corners, dig out the points, play really good defense and then also take the racket out of your hands sometimes. And then I think she’s gotten much more offensive this year, been more aggressive when she’s needed to be.”

During Saturday’s match, Gauff, 18, was undoubtedly nervous in her first major final, and she struggled from the outset. Swiatek pounced immediately on her opponent’s unforced errors and nerves and showed off her variety and nearly flawless movement. While Gauff broke Swiatek in the opening game of the second set, and then won her own service game to take a 2-0 lead, Swiatek never appeared frustrated nor let herself lose focus. She won the next five games.

“It’s the ease of most of her matches during this win streak that has impressed me most,” Shriver said. “Iga faced some stress in Paris, but she overcame the scoreboard pressure with outstanding play.”

Swiatek had achieved modest success during her first year on tour in 2019, with a fourth-round appearance at Roland Garros and her first WTA final appearance, in Lugano. She was steadily ascending up the ranks. But it was at the 2020 French Open where, as an unseeded player, she showed the world just how good she could be.

Much like this year, Swiatek stormed through the field — allowing no opponent to win more than five games — and took down top-seeded Simona Halep in just over an hour, 6-1, 6-2 in the fourth round. She was more of the same in the final — easily defeating then-reigning Australian Open champion Sofia Kenin, 6-4, 6-1, to become the first Polish player in history to win a Grand Slam singles title.

Her performance in Paris was so staggering, John McEnroe, who was commentating on the match for NBC, excitedly proclaimed on the broadcast: “The way she’s playing right now, it would be hard to imagine she wouldn’t win half a dozen majors.” Other legends of the sport were quick to echo his excitement about her future.

But Swiatek, a student of the game, knew such a task wouldn’t be easy. She was the fifth-straight first-time major champion in the women’s draw at Roland Garros, and had seen other women have success but struggle to follow it up.

After the biggest win of her life, the then-19-year-old didn’t make any McEnroe-like promises about more titles. But she knew exactly what she needed to do, and was candid about her hopes for the future.

“I know my game isn’t developed perfectly,” Swiatek told reporters. “Also, I think the biggest change for me is going to be to be consistent. I think this is what women’s tennis is struggling with. That’s why we have so many new Grand Slam winners because we are not, like, as consistent as Rafa [Nadal], Roger [Federer] and Novak [Djokovic].

She didn’t quite achieve that immediately – although she was the only woman in 2021 to reach the second week at all four majors — but this season, Swiatek has been the textbook definition of consistent. She reached the semifinals at the Australian Open and since then has been nothing short of perfect.

And while she very well might have been on her way to the world No. 1 ranking, she got a surprising assist from then-top-ranked Barty when she announced her retirement in March. Swiatek would take over the throne.

Four-time major doubles champion and ESPN analyst Rennae Stubbs remembers seeing Swiatek in the parking lot before the Miami Open got underway, just after Barty’s revelation. Stubbs was walking into the facility with Samantha Stosur, whom she coaches, and she couldn’t help but acknowledge the occasion.

“There’s the new No. 1,” Stubbs said to her in a congratulatory tone.

Swiatek made a face, almost as if she was uncomfortable with the attention, or perhaps just stunned by it.

“But since then she’s shown she’s not just content at No. 1,” Stubbs said. “She wanted to prove she belonged there.”

Swiatek won in Miami. And since then she has won everywhere else too. Throughout the stretch, she has enamored her fans with her eclectic taste in pump-up music (ranging from Dua Lipa to Led Zeppelin in Paris) and extensive reading list.

She chooses to use the platform she has to reach causes close to her heart — wearing a Ukraine flag pin on her match hat for most of the Russian invasion, and acknowledging the ongoing conflict in her victory speech on Saturday.

While Swiatek emerged with the Suzanne-Lenglen cup this time, many believe Saturday was a preview of the next decade in professional tennis, and the possible beginning of the next great rivalry.

“They are two young, terrific tennis players and even better people,” said Stubbs. “Hopefully we’re going to see this final play out many, many times over the next 10 years and hopefully this starts a little rivalry. What both of them have done by reaching the final is let us all know they are here to stay. I’m really excited because I adore both of them. They’re special kids and it’s really fantastic for the future of women’s tennis.”

Swiatek will now have all eyes on her as the season turns to grass. She has played at Wimbledon just twice before, reaching the fourth round last year, and won the junior title at the All England Club in 2018. Despite limited experience on the surface, she is already the favorite to win the title, according to Caesars Sportsbook.

Those sort of weighty expectations might make other players crumble. But so far, Swiatek has shown no signs of that. In fact, she said the pressure has only helped her realize just how much she can handle.

“I kind of felt like the sky’s the limit for me, so I feel more free right now,” she said earlier this week. “I feel like I’ve proven myself.”

Arrest made in series of Stockton, California, killings