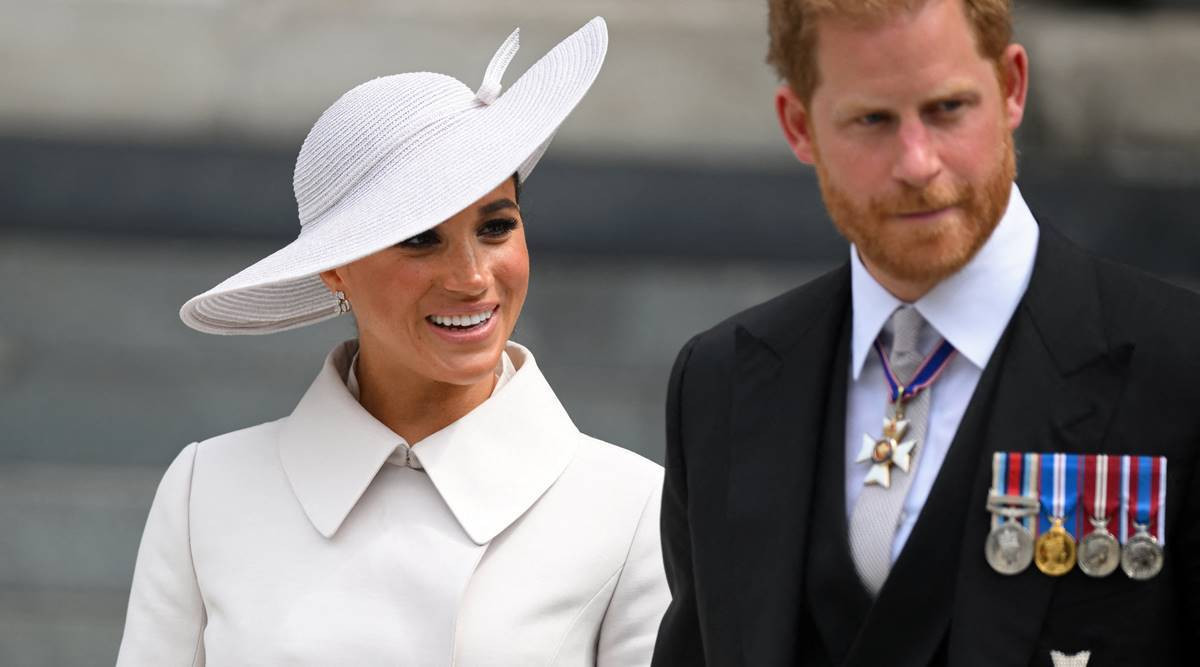 
Cheers greeted Prince Harry and his wife Meghan outside St Paul’s Cathedral on Friday as they made their first public appearance in Britain for two years.

But opinions were split among the throng of fans waiting at the London landmark to catch a glimpse of the royals, reflecting a generational divide.

The couple’s return for Queen Elizabeth II’s Platinum Jubilee celebrations was always going to be watched closely as a test of their popularity. They stood down as working royals in 2020 and settled in California, and their very public criticisms since have outraged fans of the monarchy.

“They got a really big cheer,” said Ana, a 23-year-old from Mexico studying in the UK, who was watching with a friend.

On Thursday, the couple kept a low profile at the Trooping the Colour parade, which began festivities to mark the queen’s record-breaking 70-year reign.

But Ana said the “backseat” role was “unfair”. “They should all be treated the same,” she told AFP.

Harry’s grandmother restricted appearances on the balcony of Buckingham Palace on Thursday to “working royals” only.

The St Paul’s service was the Duke and Duchess of Sussex’s only official participation in the four days of celebrations.

“They are part of the royal family,” said Amy Thomas, 17, who travelled to London from northern England with her mother for the event.

“They should be able to do a bit of a different concept of what the royal family is now.

“I just think the presentation of the royal family is old-fashioned. They’re just kind of stuck in their ways.

“Harry and stuff and all that went on. I think you can tell it needs to be dealt with differently.”

These opinions stood at odds with a YouGov poll published this week that suggested nearly two-thirds of Britons (63 percent) viewed both Harry and Meghan negatively.

But there is a generational gap. Among those aged 18 to 24, the couple are largely seen positively. Among the over-65s, more than 60 percent hold a negative view.

Gwyneth Cookson, 65, from Motherwell, near Glasgow in Scotland, said proudly she had shaken hands with Meghan at Edinburgh Castle.

“I’m a fan,” said Cookson, wearing a sparkly Union Jack badge. She was there with her daughter and grandson holding a toy corgi. “Hopefully there will be a wee reconciliation.”

“I’m not really interested any more,” said Ruth Horsfield, from Lancashire in northwest England, who came to London on a pensioners’ coach tour. “Nothing against them but they’ve got their own lives now. They don’t feel part of it any more.”

Visit the Mesmerising Khajuraho During Monsoon to Experience Pure Bliss

Another said, “They’ve divested themselves of it really. I don’t think they should make any money out of it.”

Their friend Glynis Morgan from Yorkshire added, “I think they’re just gradually being forgotten about.”

“As long as they don’t rake muck and do too much damage to the queen.”

Wearing a purple jubilee T-shirt and matching cap and a Swatch watch featuring the queen and a corgi, Coleen, from the Canadian city of Toronto where Meghan once lived, was clearly not a fan.

“I don’t think she did anyone any favours,” she said quietly. “I think he picked the wrong wife.”

Sitting beside her, Lorraine Frame from Northern Ireland cut in: “They have their own agenda. They’re coming back because they’re scared of missing something and they are not welcome. I certainly booed them.”

Wearing a Union Jack t-shirt and reading a newspaper royal supplement, she said she also came especially for the jubilee.

“I don’t think they can be trusted because of their dealings with Netflix, what they may or may not say, and I think shame on them. I mean Harry was brought up better,” she said.

Megan, she claimed, “came into this royal family thinking she could change hundreds of years of history and tradition — and she didn’t”.

“Let her have her day today and the sooner they get back to America the better.”

Chelsea Handler opens up about her split with Jo Koy in style: Check out

But did they do something about the women’s bathrooms? Yes, they did.

An Opera Festival That Keeps Faith With Shutdown’s Innovations