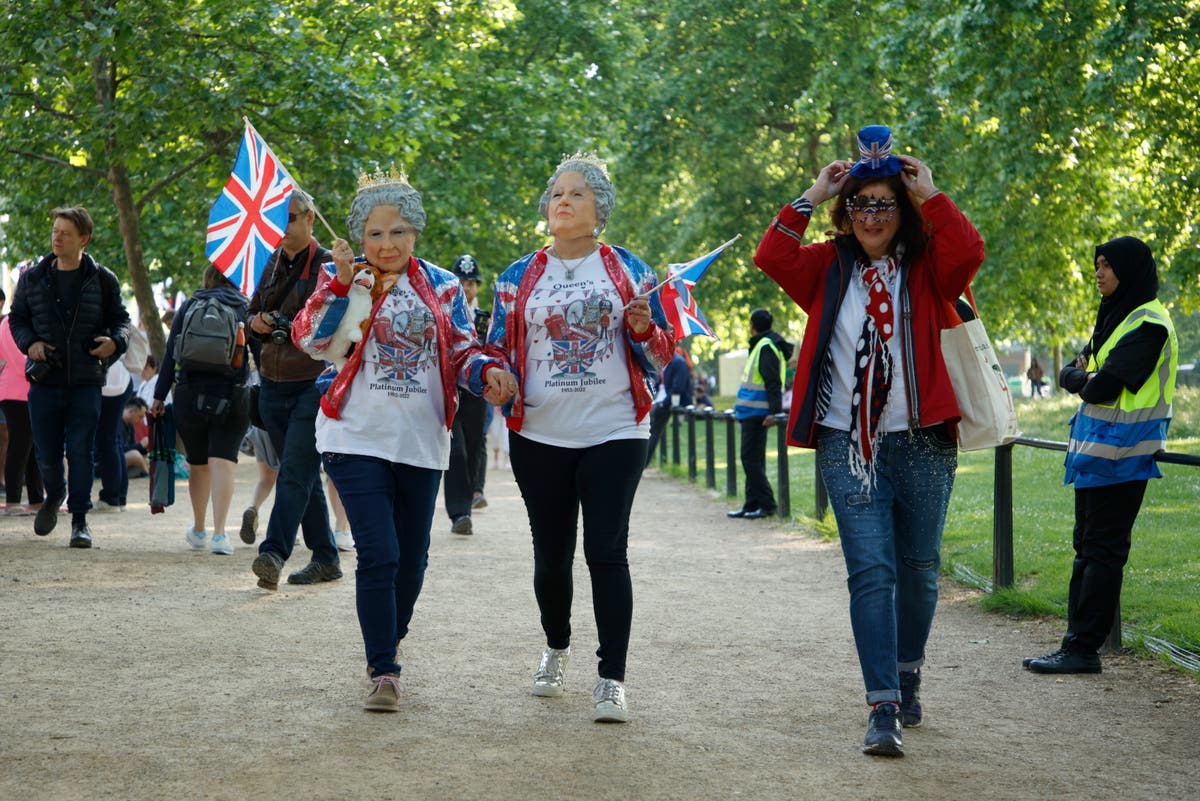 Thousands of people are set to join street parties across the UK today while the Queen and her family will observe Trooping the Colour as the country marks the Platinum Jubilee with a four-day bank holiday weekend.

Events range from family picnics to a record-breaking 5,000-strong street party, while the Met Office has warned it will be a quintessentially British summer bank holiday with drizzle and patchy sunshine.

The largest party celebrating the Queen’s record-breaking 70-year reign is set to be Morecambe Bay’s Big Jubilee Lunch on Sunday.

A Service of Thanksgiving, lit Platinum beacons, a Jubilee pageant and a star-studded concert are also planned.

The Queen has returned to Windsor for the events after a short stay at her Balmoral estate in Scotland.

While the monarch has made mostly virtual appearances so far this year due to ongoing mobility issues, she appeared at the Chelsea Flower Show this week riding an electric buggy.

Could jubilee street party road closures give people a taste for quieter streets, less traffic and an improved sense of community?

Union flags and anthem renditions from the Mall

The scene along the Mall – lined with Union Jack-clad patriots – is one of restless anticipation, reports Emily Atkinson.

Dominating today is a sense of great love for Britain and Britishness, a sentiment stirred up by apparently unwavering devotion to the Queen.

The crowd is made of people from up and down the UK and beyond, and renditions of the national anthem are can be heard in different pockets as you stroll its perimeter.

Allison and Yvonne, from Redditch, and Rita, from Bromsgrove, travelled down from the West Midlands last night before waking up at the crack of dawn to bag their spot on Pall Mall.

“I was at the 1977 Jubilee. I was five in school,” Allison told The Independent.

“We got a mug and a coin. It was fabulous and to be part of it again today is amazing.”

Rita also made the trip down to London for the Queen’s 60th Jubilee.

“I didn’t stand on The Mall last time, so I want to stand there today and fly my flag,” she said.

Causing a stir today is the attendance of Prince Harry and Meghan, despite the controversy of recent years.

But for Rita, it is important that Harry attends the celebrations.

“They’re family. It’s her grandson. I think they should be allowed.”

The sidelining of the Duke of York, in particular, is creating division among Jubilee attendees.

“He’s a royal member. He’s been in the armed forces and served his country. And it’s his mother. So why shouldn’t he be at least on the balcony, if nowhere else, or at St Paul’s tomorrow?”

The Met Office has said northern areas can expect a cool and showery start to the bank holiday on Thursday, before temperatures pick up on Friday, which is set to be the warmest day of the weekend.

Temperatures are set to soar to 26C in the south on Friday, while north-west Scotland is expected to be the warmest on Sunday.

The Queen has shared a message with the nation ahead of her platinum jubilee celebrations.

She said: “I continue to be inspired by the goodwill shown to me, and hope that the coming days will provide an opportunity to reflect on all that has been achieved during the last 70 years, as we look to the future with confidence and enthusiasm,” she said.

5,000 to join largest party on Sunday

The largest party celebrating the Queen’s record-breaking 70-year reign is set to be Morecambe Bay’s Big Jubilee Lunch on Sunday, which is hosting around 5,000 people at over 500 tables overlooking the sea.

Official celebrations will begin at 1pm with a Samba dance down the promenade, before Lord Shuttleworth – the Lord Lieutenant of Lancashire – cuts a replica cake of the kind the Queen cut at the G7 Big Lunch at Eden last year.

Smaller, cheaper, and more democratic: The future of the British monarchy

What does the future of the British monarchy look like, asks Sean O’Grady.

The short answer to that question, as we look towards the arrival of King Charles III (it sounds so strange, doesn’t it?), is that it will have a ruddy red face, a combover and be extremely well tailored, albeit with a self-consciously fogeyish sense of style.

Instagram’s pivot to video may be its death knell

It will, almost inevitably, be a time when the mettle of the man, those around him and the constitution he inherits will be tested, very possibly to the limit.

Where will Harry and Meghan be during the parade?

The Duke and Duchess of Sussex will join the royal family at Trooping the Colour on Thursday – though the Queen will not be with them.

In May, Buckingham Palace announced the Queen has decided to limit the balcony line-up to working members of the royal family, appearing to rule out the couple who abandoned royal duties in 2020 and Prince Andrew.

The full schedule for the day

The parade will begin at 10am, and end with a RAF flypast at 1pm, which royal family members will watch from the Buckingham Palace balcony.

Here is the full rundown of timings for today:

Key events throughout the day

The main events coming up today include the Trooping of the Colour military parade from 10am and the RAF flypast, which should appear over out heads in central London around 1pm.

The latter will have the audience of the royals, who will lined up on the balcony for the spectacle.

Charles, the Duchess of Cornwall, William and the Duchess of Cambridge, the Earl and Countess of Wessex, Anne, the Duke and Duchess of Gloucester, the Duke of Kent, Princess Alexandra and Vice Admiral Sir Tim Laurence are expected on the balcony for the flypast.

The principal beacon outside Buckingham Palace will also be lit by a senior member of the royal family to join up with a network of flaming tributes across the UK and Commonwealth.

Good morning from Buckingham Palace, where The Independent will be reporting live from today’s round of Platinum Jubilee celebrations.

Stay tuned for live updates throughout the day.

Nothing but Flowers (and Some Creatures, Too)