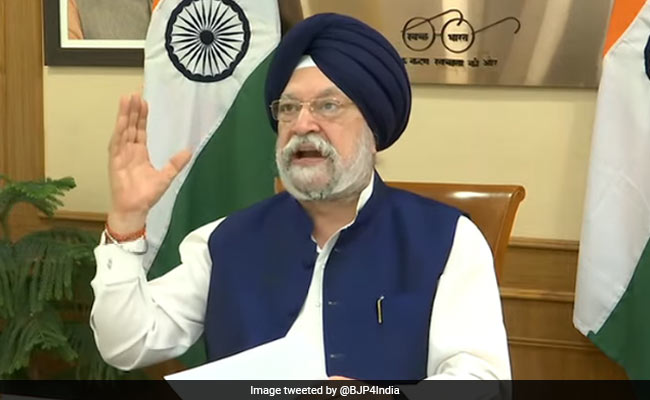 With fuel prices remaining unchanged for almost two months despite a rise in cost, oil companies have started detailing under-recoveries or losses, which are as high as Rs 17.1 per litre on petrol and Rs 20.4 on diesel.

Oil Minister Hardeep Singh Puri said fuel retailers have knocked on the doors of the government seeking ‘relief’ but hastened to add that pricing is their decision.

While refusing to comment on reports of private oil refiners making a killing on importing Russian crude oil at deep discounts and exporting refined petroleum products to the US, the minister said the finance ministry was the appropriate authority to decide on the levy of a windfall tax on high gains the oil and gas producers are making due to surge in international energy prices.

“All our corporate citizens have a sense of responsibility,” he told a news conference here. “These actions (revision in fuel prices) are taken by companies.” Oil firms, he said, do not come to him for consultations on revising fuel prices.

Local pump rates are benchmarked to around $85 per barrel crude oil price while Brent is currently trading at $113. This has resulted in a gap between cost and selling price, referred to as under-recovery or loss. As of June 2, the industry was losing Rs 17.1 a litre on petrol and Rs 20.4 on diesel.

“They (oil companies) are talking under-recoveries. They are talking about that. As I said, they are responsible corporate citizens and they will take whatever decision they have to,” Mr Puri said.

He did not elaborate on the relief that oil firms have sought.

The Government last month cut excise duty on petrol by Rs 8 per litre and by Rs 6 on diesel. This reduction was passed on to the consumers and not adjusted against the under-recovery or losses oil firms make on selling petrol and diesel.

This curtailment has met with criticism in some sections, which say the two firms are exporting at profit rather than selling to the domestic market.

While Reliance BP Mobility Ltd — a joint venture of Reliance and UK’s BP — is a standalone fuel marketing company which has 1,459 petrol pumps in the country, Reliance Industries Ltd owns twin oil refineries at Jamnagar in Gujarat, with one of them being licensed only to export.

Rosneft-backed Nayara Energy too has an oil refinery at Vadinar in Gujarat.

Asked to comment on reports of the private sector refiners making a killing on importing Russian crude available at deep discounts and then exporting the finished products to the US and other countries, Puri said it is very hard to say crude oil from which country went into a giant refinery for processing and the product exported is from which crude oil.

“Is Russian crude coming into a private refinery and going to the US (as finished product), I would never be able to find. There is no possibility,” he said.

However, private refiners not selling in the domestic market was “a legitimate question” to ask but he would not comment on the issue or advise them through the press, Mr Puri said.

“My primary responsibility as line minister is to make sure petrol and diesel are made available,” he said.

“Many of our entities are both producers, importers and exporters. That is a thing you must realise.”

On the issue of imposing a windfall tax like what the UK did last week, the minister said the issue falls in the domain of the Finance Ministry.

“It is Finance Ministry issue. But I would think that our present focus is on ensuring that we get access to energy at secure and affordable prices. That is main thing,” Mr Puri said.

Exports, he said, will take place. “We import crude from one country, to the same country we export high speed diesel. These are process which go on. Rest is all speculative.”

Weekend Special: Indulge In This Dark Chocolate Coffee For A Delicious Drink

Drake, 21 Savage agree not to use ‘Vogue’ trademarks | The Express Tribune