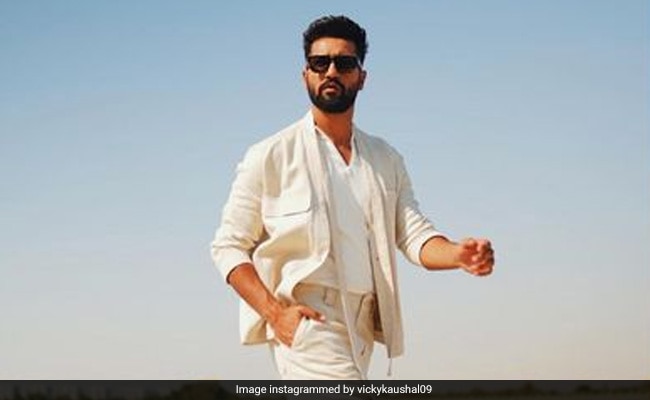 Actor Vicky Kaushal, who will be attending the 22nd edition of the International Indian Film Awards (IIFA) on Saturday, has shared some dashing pictures of himself on his social media account. “Touchdown Abu Dabhi. Time for iifa” captioned Vicky on his Instagram handle. The Uri actor could be seen all decked up in a beige coloured jacket, and a pair of beige trousers. Vicky chose to wear a matte, white-hued T-shirt inside and packed up his style quotient with black sunglasses and shiny brown leather shoes.

In the first picture, he could be seen striking a walking pose with one hand in his pocket, looking quite handsome. As for the second image, Vicky had a similar pose, looking downwards, his macho-styled hair complimenting the actor’s look further.

This year, IIFA is being held in Abu Dhabi’s Etihad Arena, of Yas Bay Waterfront on Yas Island on June 2, 3, and 4. Apart from Vicky Kaushal, some of the biggest stars from Bollywood like Tiger Shroff, Shahid Kapoor, Salman Khan, Sara Ali Khan, and Ananya Panday have walked the red carpet and have entertained the audience.

These celebrities are set to light the stage on fire today that is June 4. IIFA Rocks 2022 was hosted by filmmaker Farah Khan Kunder and actor Aparshakti Khurana on June 3, while Salman Khan, Riteish Deshmukh, and Maniesh Paul will serve as hosts for the main night today.

Koffee With Karan 7: Not Being Invited To Katrina Kaif-Vicky Kaushal’s Wedding Was “Very Embarrassing” For Karan Johar

Meanwhile, on the work front, the newlywed will be seen in Govinda Nam Mera, also featuring Bhumi Pednekar and Kiara Advani.

Apart from this, Vicky has an untitled movie by Laxman Utekar starring Sara Ali Khan in his lineup.

Improve Communication for a Better and Smooth Relationship

Retail Inflation Eases To 6.77% In October, Lowest In 3 Months

For Dad Sham Kaushal, Sons Vicky And Sunny Posted This

Vicky Kaushal Was Hungry So He Stole Some Snacks (Deets Inside)

Hey, Do Not Disturb Vicky Kaushal, He Is Busy “Stealing” Brother Sunny’s Snacks