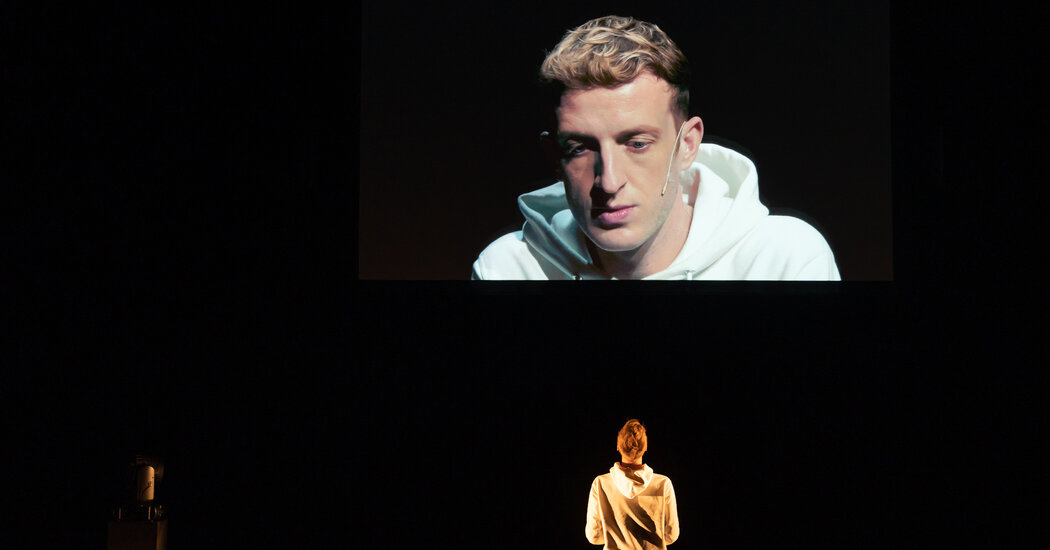 PARIS — Édouard Louis isn’t happy right now. That is one of the takeaways from “The Interrogation,” a new play he was set to star in, then canceled, then rewrote for another actor, working with the Swiss director Milo Rau. In May, “The Interrogation,” which was co-produced by the Belgian playhouse NTGent and had its world premiere in Amsterdam, made its way to the Théâtre de la Colline in Paris — and perhaps fittingly, left more questions than answers in its wake.

It is a deeply meta addition to what I guess we could now call the Édouard Louis theatrical universe. The recent onslaught of French and international productions based on his work — with star directors including Thomas Ostermeier and Ivo van Hove — has been curious to watch, because Louis doesn’t write primarily for the stage. Most of his books, including “The End of Eddy,” which delved into his difficult childhood as a closeted gay child in a homophobic, violent, working-class environment, have been billed as memoirs or autobiographical novels.

For a little while, it seemed as though Louis had happily rekindled an early passion through the medium, since theater classes were his escape as a teenager. Louis has even played himself onstage in Ostermeier’s version of “Who Killed My Father,” a monologue commissioned and originally performed by the French actor and director Stanislas Nordey.

Yet if Rau’s “The Interrogation” is to be believed, Louis hated that experience. In this production, he appears only through video and in voice-overs. Onstage, he is played by the Belgian actor Arne De Tremerie. “Something didn’t feel right” about his stage debut, we learn via De Tremerie; Louis also calls the life of an actor “exhausting” and “not the dream life I had hoped for.” It’s too bad, then, that while “The Interrogation” was on in Paris, Louis was in New York to perform “Who Killed My Father” at St. Ann’s Warehouse (through June 5).

There is a mild absurdity to this situation, which goes unacknowledged in Rau’s self-serious production. It starts with a letter, read in voice-over, in which Louis apologizes to Rau and tells him he doesn’t want to commit to being onstage again. “The Interrogation,” which was originally supposed to premiere in May 2021, was hastily canceled as a result. “Once again, I failed at being happy,” Louis laments.

Enter De Tremerie, who took over so the production could go forward. With his blond hair and slight build, he can easily pass for Louis, and offers a heightened, more theatrical version. Where Louis, an inexperienced actor, aimed for naturalness onstage, De Tremerie has homed in on some of his quirks: the way he carries himself with his head slightly forward, the nervous flutter of his lips.

De Tremerie’s performance is commendable, yet “The Interrogation” doesn’t give him enough space to exist separately from Louis. In fact, Louis keeps appearing on a screen, in a hooded sweater identical to De Tremerie’s. At several points, De Tremerie looks up at Louis, or playfully imitates him; Louis, mostly shot in close-up, looks down at the stage. Fiction meets reality, a common trope in Rau’s stage work, but here, neither appears to enrich the other.

“The Interrogation” could have made much more of its central paradox. At its heart, it is about a literary star who unsuccessfully sought meaning in success, since he had pictured it as his “vengeance.” (“Now I exist,” De Tremerie says as Louis, after retracing his rise to the top.) Yet as the text zooms in on the backlash against Louis’s work, and the demands that come with fame, it becomes clear that the author’s dissatisfaction extends beyond acting.

At the same time, “The Interrogation” feeds the frenzy around Louis, whose story has become bigger than himself, at once a lightning rod and part of French folklore. The show pores over episodes of his life that he has already recounted elsewhere without much new insight, from the bullying he endured as a child to his life-changing encounter with the writer Didier Éribon, who became a mentor. “I feel like I’ve been robbed of my freedom,” De Tremerie says onstage of Louis’s situation, before addressing the audience directly: “I am not your little clown.”

But he doesn’t need to offer himself up for consumption so exhaustively. Just last year, Louis published two books that joined the flurry of stage productions. A TV adaptation of “The End of Eddy,” by the Oscar-winning screenwriter James Ivory, is also in the works, Louis said recently on Instagram. Near the end of “The Interrogation,” De Tremerie says with a sigh: “No more stories. No more revenge. Just life.” Perhaps Louis should take his own advice, at least for a time.

On a much smaller stage in Paris, another real-life figure who has unwittingly become a symbol found a striking home. “Free Will” (“Libre Arbitre”), a new play co-written by Léa Girardet and Julie Bertin (who also directed), delves into the life of Caster Semenya, the South African runner and Olympic gold medalist who has been repeatedly barred from competition since 2009 because of elevated testosterone levels.

Girardet had already scored a hit with a soccer-inspired one-woman show, “The Syndrome of the Bench,” and “Free Will” is equally lively and punchy, though darker. If you have lost track of the saga around Semenya, an intersex woman who was asked by World Athletics, the sport’s governing body, to take medication to suppress her natural hormones, this play is a sobering reminder.

Juliette Speck is quietly excellent when she portrays Semenya, and all four cast members perform multiple roles. They depict the sex verification tests Semenya had to undertake, imagine meetings between high-ranking members of World Athletics and recreate the 2019 case Semenya brought to the Court of Arbitration for Sport, using verbatim excerpts from the trial. At the end of the play, the court’s ruling — that the restrictions applied to Semenya were discriminatory, but a “reasonable” way to preserve the integrity of women’s sport — is, quite simply, heartbreaking.

Bertin and Girardet do a superb job of explaining the complex issues and vocabulary involved, with more playful scenes interspersed. In one, the cast pretends to call World Athletics to suggest a new category for competitions: “reassuring women,” whose dainty running style (in heels, complete with a demonstration) would be more in keeping with the expectations of femininity placed on athletes.

“Free Will” had its Paris premiere at the Théâtre Dunois, which caters to young people, but older adults have much to learn from it, too. Unlike Louis, Semenya isn’t in the spotlight enough for theater audiences to know the entirety of her journey — but her story deserves to be told.

Live updates: Brazil vs Cameroon, Serbia vs Switzerland and other World Cup news

Rockets or missiles reported to have landed in Poland near Ukrainian border, killing 2

Beautiful lines from KK’s songs that will touch your heart