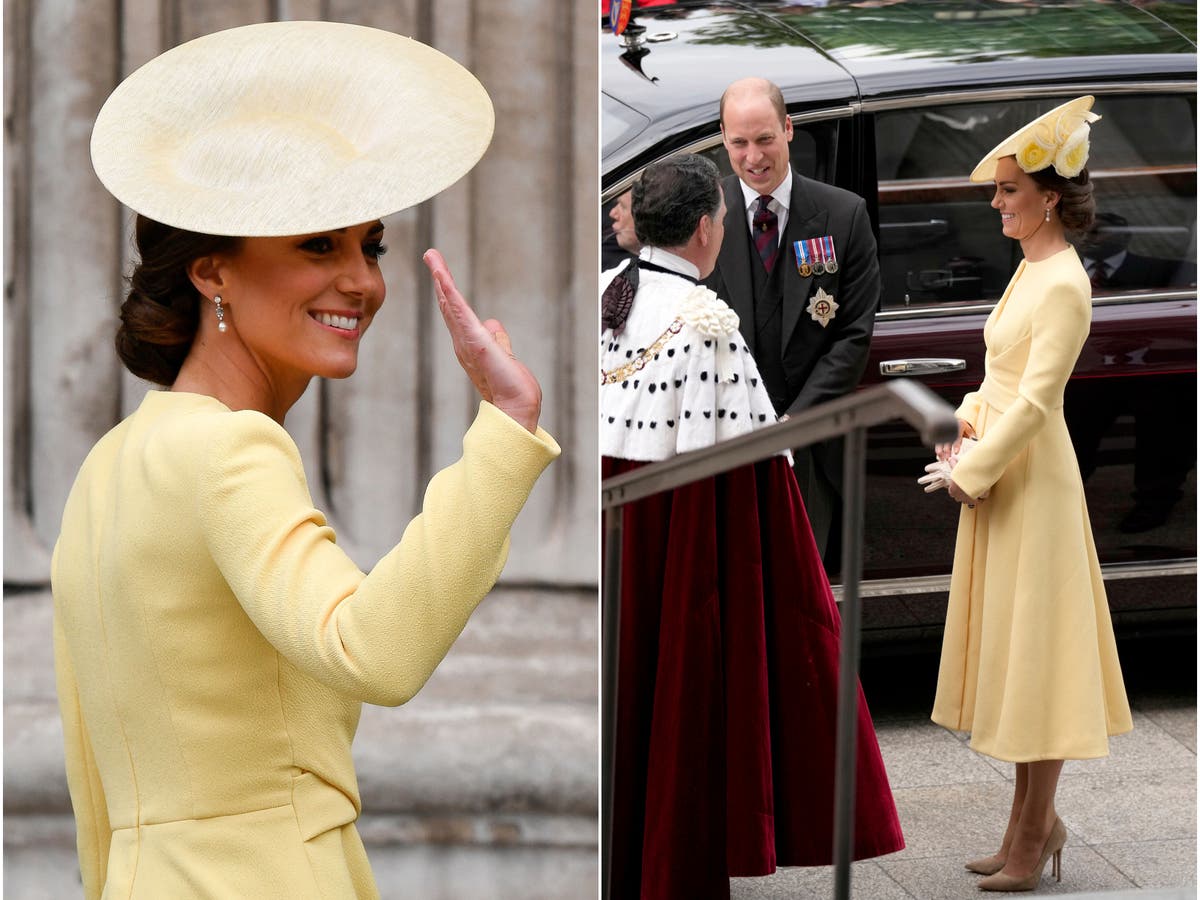 The Duchess of Cambridge has arrived at St Paul’s Cathdral in London for a Service of Thanksgiving in honour of the Queen’s 70-year reign.

She accessorised with a matching hat with pale yellow flowers from Philip Treacy.

Both designers are well-loved by the Duchess of Cambridge, who was recently spotted in a Philip Treacy design during a garden party at Buckingham Palace.

Kate arrived alongside her husband, the Duke of Cambridge, who looked smart in black suit.

The Cambridge’s were greeted by loud cheers and waved to the public as they walked up the steps to the cathedral.

The couple joined other senior members of the royal family, including the Prince of Wales and the Duchess of Cornwall.

The Duke and Duchess of Sussex are also at today’s service after arriving in the UK earlier this week.

Kate earned high praise from fans on Thursday after she was pictured at the Trooping the Colour ceremony in a crisp white Alexander McQueen coat dress, which she accessorised with a navy blue and white hat by Philip Treacy.

She completed the look with a subtle nod to her late mother-in-law, donning a pair of diamond and sapphire earrings once worn by Princess Diana.

The drop earrings are made up of two round sapphires, surrounded by a halo of diamonds. They were worn by the late Princess of Wales on several occasions, including the 1996 Met Gala.

The Duke and Duchess of Cambridge joined the Queen on the balcony of Buckingham Palace during the Royal Armed Forces flypast, alongside their three children, Prince George, 8, Princess Charlotte, 7, and Prince Louis, 4.

Louis delighted viewers as he pulled several animated faces at the crowd and interacted with his grandmother, the Queen.

At one point, during the flypast, Louis was shown covering his ears and making a screaming face.

Amused by her youngest son’s actions, Kate could be seen laughing as Louis reacted to the flypast.

Irrfan Khan’s Son Babil Wants To Explore His Own Qualities: “There Is A Lot Of Pressure”

Street foods from Kolkata that redefine indulgence | The Times of India

Meghan Markle, Prince Harry decide to give in to public demand?

Neena Gupta Gives A Unique Twist To This Indian Sabzi, Can You Guess?