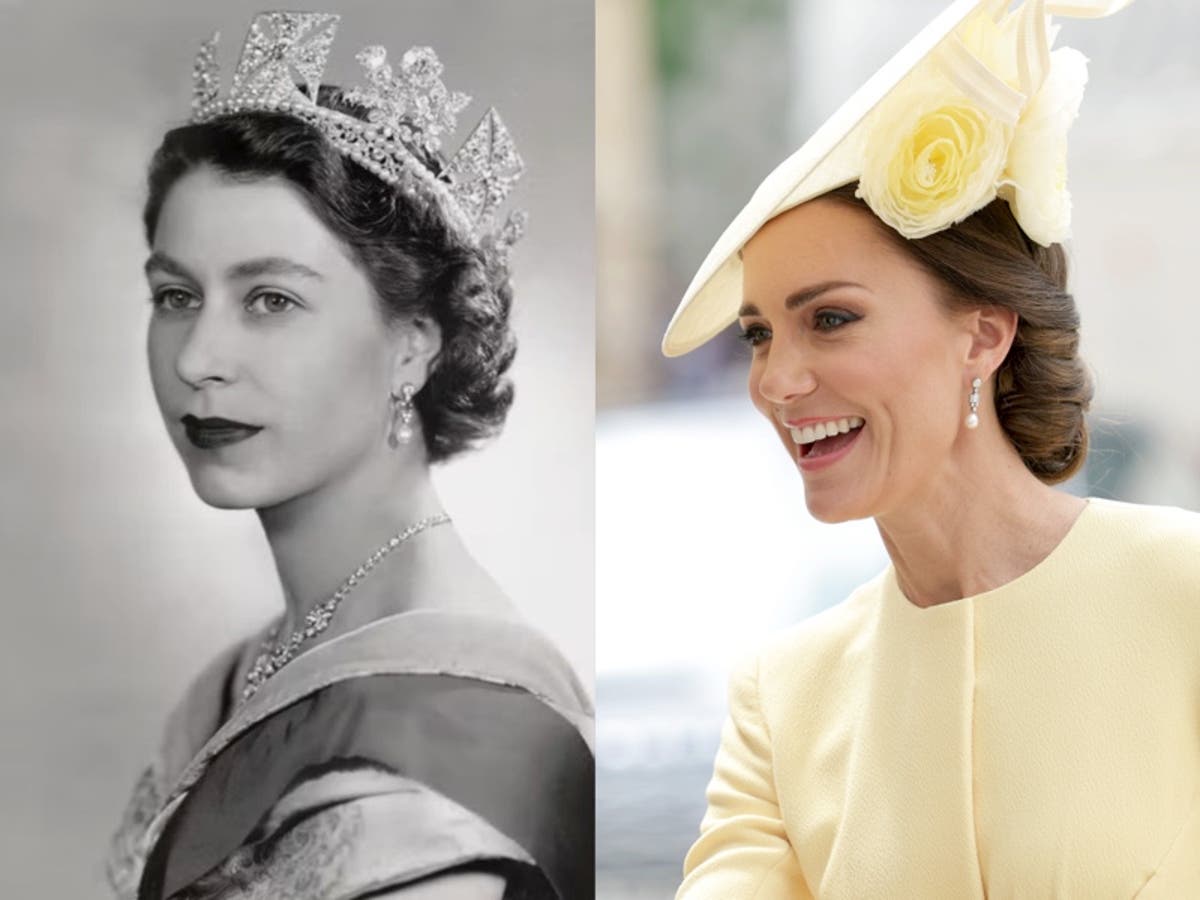 The Duchess of Cambridge has once again paid homage to a member of the royal family, by wearing a pair of the Queen’s diamond and pearl drop earrings to Friday’s Service of Thanksgiving.

Nearly 2,000 guests and members of the royal family gathered in St Paul’s Cathedral in London on Friday as part of the four-day platinum jubilee celebrations to mark the Queen’s 70 years on the throne. However, the 96-year-old monarch had pulled out of the high-profile occasion following “discomfort” during a busy first day of festivities on Thursday.

Kate Middleton was joined by her husband Prince William as she attended the service in a fitted pale yellow coat dress by Emilia Wickstead, featuring a knotted waist detail and A-line skirt. She paired the look with a matching hat from Philip Treacy, which was adorned with pale yellow flowers on top.

The Duchess of Cambridge was also spotted wearing a pair of diamond and pearl earrings known as the Bahrain Pearl Earrings, a loan from the Queen to the duchess.

The earrings feature a large Bahrain pearl hanging from one large round diamond stud, from which four smaller round diamonds and three baguette diamonds are also suspended. The pair of earrings were gifted to the Queen as a wedding present by the Hakim of Bahrain in 1947.

In 1982, the diamond and pearl earrings were loaned to the Princess of Wales for a banquet at Hampton Court Palace, during a state visit from Queen Beatrix and Prince Claus of the Netherlands. Most recently, the Bahrain Pearl Earrings were worn by Kate Middleton to Prince Philip’s funeral at Windsor Castle in April 2021.

On Thursday, the duchess also paid tribute to her late mother-in-law during the Trooping the Colour parade when she wore a pair of diamond and sapphire earrings once worn by Princess Diana. The earrings were most notably worn by Diana to the 1996 Met Gala.

The diamond and sapphire earrings are also a similar design to the engagement ring passed on to Kate when she and Prince William got engaged in 2010. She paired the famous earrings with a white Alexander McQueen coat dress, and a navy blue and white hat by Philip Treacy for Thursday’s parade.

The royal couple were greeted by loud cheers on Friday as they walked up the steps to St Paul’s Cathedral. The Duke and Duchess of Sussex were also in attendance at the thanksgiving service, following their arrival to the UK earlier this week.

This week’s platinum jubilee celebrations mark Prince Harry and Meghan Markle’s first royal engagement since they left the UK for a new life in the US two years ago. The Service of Thanksgiving was also the first time that the Cambridges and Sussexes have been seen together at the same event since Commonwealth Day in March 2020, shortly after Harry and Meghan announced they would be stepping back from their roles as senior working royals. The couple sat on the opposite side of the cathedral to the Duke and Duchess of Cambridge during the special service.

Disenchanted: Disney attempts to break stereotypes of motherhood only to reinforce them