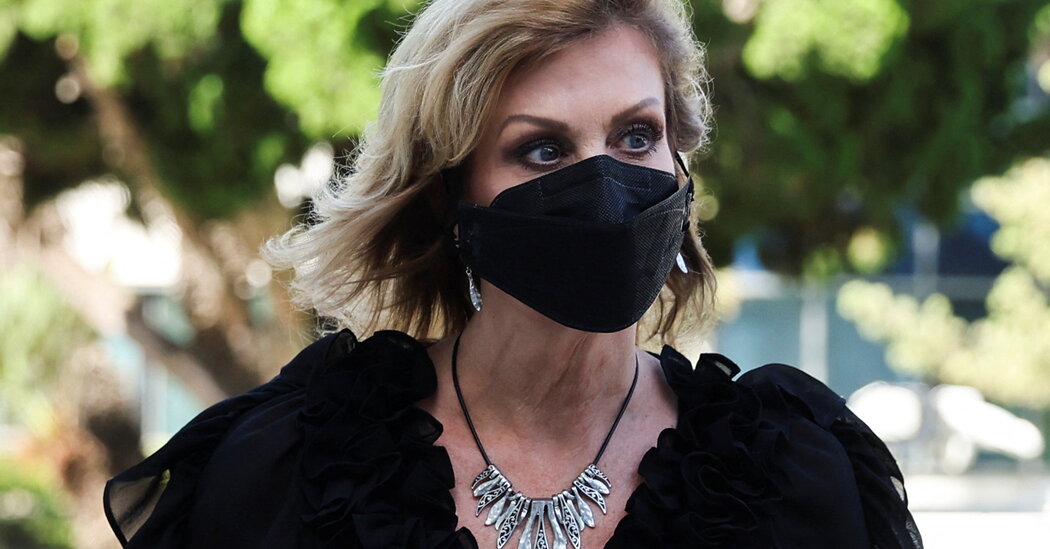 Bill Cosby had taken Judy Huth and her friend to the game room of the Playboy Mansion in Los Angeles in 1975 when she asked to use the bathroom in an adjoining bedroom, Ms. Huth’s lawyers said in court on Wednesday.

When she came out of the bathroom, Mr. Cosby was sitting on the bed. “He taps on the bed,” said Nathan Goldberg, a lawyer for Ms. Huth who has said she was 16 at the time, as if to say, “‘Come here.’”

“When she did timidly, that’s when he pounced,” Mr. Goldberg said during opening statements in the trial of a civil case brought by Ms. Huth against Mr. Cosby for sexual assault.

In their opening remarks, Mr. Cosby’s lawyers disputed Ms. Huth’s account, suggesting she had been an older, and willing, visitor to the Playboy Mansion who, by her own account, did not flee after an encounter with Mr. Cosby but rather stayed on for hours, swimming in the pool and watching a movie.

“Boy, did Judy and Donna enjoy themselves,” a lawyer for Mr. Cosby, Jennifer Bonjean, said, referring to Ms. Huth and her friend.

The trial, expected to last seven to 10 days, is being held at the Santa Monica branch of Los Angeles Superior Court.

In their filings, Mr. Cosby’s lawyers have denied the allegations, describing them as a fabrication. “We believe that Mr. Cosby will fully be exonerated once the jurors hear the evidence as well as examine the many inconsistent accounts given by Ms. Huth,” Mr. Cosby’s spokesman, Andrew Wyatt, said in a statement.

After Bill Cosby’s 2018 criminal conviction for sexual assault was overturned, the first civil case accusing him of sexual misconduct has now reached trial.

In detailing Ms. Huth’s account, Mr. Goldberg said Mr. Cosby tried to kiss her and put his hands down her pants. When she told him she was on her period, he dropped his pants, and “took her hand with his” and forced her to perform a sex act, he said.

Mr. Goldberg spoke for a little more than an hour, recounting how Ms. Huth and her friend were playing Frisbee when they spotted Mr. Cosby filming a movie in a park in San Marino, Calif.

He invited them onto the set and days later brought them to his tennis club, where, Mr. Goldberg continued, Mr. Cosby encouraged them to take a drink every time they lost at pool. Afterward, Mr. Goldberg said, Mr. Cosby had them follow him in a car to the Playboy Mansion, where the encounter in the game room occurred.

Mr. Goldberg said Ms. Huth wanted to leave at that point, but her friend, Donna Samuelson, persuaded her to stay. Ms. Samuelson, who testified on Wednesday, said that Mr. Cosby had Ms. Huth “locked in the room,” and said Ms. Huth was crying when they went outside.

“She grabbed her purse and said we are getting out of here,” Ms. Samuelson told the court. “She told me Bill Cosby tried to have sex with her.”

She said she and Ms. Huth talked for about half an hour in her car, but she persuaded her friend to stay because she thought spending an evening at the mansion would calm her down.

“She told me not to tell anyone,” said Ms. Samuelson. “It was embarrassing and humiliating to her.”

They swam and ordered drinks, mingled with famous actors and, later, watched a movie. Only years later, in 2014, when Ms. Huth’s son turned 15 and other women started to come forward with similar accounts about Mr. Cosby, did the emotional damage of what had happened to Ms. Huth come to the fore, her lawyer said.

“It was like a cork popped out of the bottle and all of her buried feelings rushed to the surface,” Mr. Goldberg said.

Ms. Huth has produced photographs of the visit taken by Ms. Samuelson at the mansion showing Ms. Huth with Mr. Cosby. Ms. Bonjean accused Ms. Huth and her friend of “saving mementos of their rape,” raising questions about why a sexual assault victim would keep such tokens of the visit. The photographs were part of “a plan to make a buck,” said Ms. Bonjean, who spoke for about an hour. “Judy Huth has been trying to cash in on these photos for decades.”

Mr. Cosby’s legal team has also introduced records from the Playboy Mansion that showed Mr. Cosby visiting with two unnamed guests, and said the records showed that the two guests had stayed at the mansion for about 12 hours.

Ms. Huth’s suit, first filed in 2014, had been largely put on hold while Mr. Cosby was being criminally prosecuted in another case in Pennsylvania where he was accused of drugging and sexually assaulting Andrea Constand. The 2018 criminal conviction in the Constand case was overturned last year by an appellate court on “due process” grounds, and he was freed from prison.

Mr. Cosby has acknowledged meeting with Ms. Huth at the Playboy Mansion but denied her allegation of sexual battery and has challenged her contention that she was a minor at the time.

Did You Know Gout Flares Can Increase The Risk of Heart Attack?

Ms. Huth’s legal team said it intends to introduce two other women to testify about similar encounters with Mr. Cosby.

One of the women will testify, Mr. Goldberg said, that Mr. Cosby, whom she met at a doughnut store where she worked, was also taken to the Playboy Mansion by Mr. Cosby. In the game room, Mr. Cosby gave her a pill, the lawyer said, and he assaulted her as she lost consciousness.

“In each instance, he meets them in circumstances that don’t appear threatening,” Mr. Goldberg said. “He takes them places where they seem comfortable. They don’t feel threatened in this mansion, the movie set. He does not care about their family or friends nearby. He has no fear.”

Mr. Cosby, 84, has invoked his Fifth Amendment privilege against self-incrimination and will not testify or attend the trial, his spokesman has said. Ms. Huth, 64, attended court Wednesday and is expected to testify later in the trial.

Ms. Huth also reported her accusation to the police in 2014, but prosecutors declined to file criminal charges because the statute of limitations had passed.

She was able to file a lawsuit because under California law, in some cases, the statute of limitations can be extended for people who say they only recently recognized as adults the damage done by a repressed incident of sexual abuse they experienced as a child.

The deadline to file such a suit is determined in part by when the person, as an adult, becomes aware of the severe psychological effect of the abuse.

Mr. Cosby’s lawyers have questioned whether she had only remembered the alleged abuse a short time before filing the suit because, they said, she had contacted a tabloid about it 10 years earlier.

They also tried to stop the trial from going ahead when Ms. Huth recently changed her recollection about when the encounter occurred. She initially said that it had happened in 1974, when she was 15. But more recently she concluded that it was actually in 1975, when she was 16. The law in California, then and now, holds that a 16-year-old is classified as a minor, but Mr. Cosby has contended that he did not meet Ms. Huth until several years later.

She said she only recently realized she had the date wrong after, among other things, reviewing documents put forward by Mr. Cosby that clarified when the movie filming she recalled witnessing had taken place.

10 of the best films to watch this August

Shocking confessions of a marriage counsellor | The Times of India

Mahira, Fahad talk how fate united them together onscreen | The Express Tribune

Pickleball Is Expanding. Tennis Is Mad.

Twins, witches and the UK’s most hated woman: The ‘cash for babies’ mum 21 years on