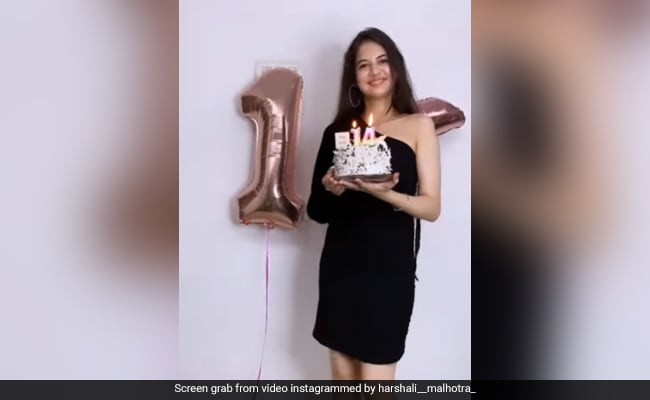 Bajrangi Bhaijaan’s Munni, played by Harshali Malhotra, turns 14 on Friday. And, the actress has dropped a special Instagram post to mark the day. In the video, we see two balloons reading “13”. Soon, the “3” is taken out of the frame and is replaced by “4”, so that the balloons read “14”. Now, Harshali enters the frame in a sleek black dress and black boots. Of course, she is no more a tiny girl but a charming teenager. She stands with a birthday cake in front of the camera. Her caption read, “Bye-bye 13, let’s welcome and rock 14. Happy birthday to me.” Several fans wrote their birthday wishes in the comment section. While some still preferred to call her “Munni”, others chose to drop heart and flower emojis.

When Harshali Malhotra turned into a teenager last year, she shared a video from her birthday celebrations. She looked pretty in a pink frock while blowing out the candles and cutting the cake. She wrote, “t’s my birthday … yippppeeee. Officially teenager now.”

In 2021, we heard rumours of a sequel to Bajrangi Bhaijaan. In an interview with PTI, Salman Khan confirmed that Bajrangi Bhaijaan 2 is on the cards. Director Kabir Khan had commented that the idea and the script of the film weren’t yet ready.

Bajrangi Bhaijaan is a 2015 drama film directed by Kabir Khan. The film starred Salman Khan, Kareena Kapoor and Nawazuddin Siddiqui. However, the cutest presence on the silver screen was Harshali Malhotra. She played the role of Shahida aka Munni, a girl from Pakistan who gets lost in India. The film is about how an Indian named Pavan Kumar Chaturvedi (played by Salman Khan) helps Munni get back to Pakistan. Harshali’s performance won her critical acclaim and several nominations.

Germany vs Japan and World Cup news and highlights from Qatar

These discounted e-commerce stocks could be winners this holiday season. Here’s why

Weekend Binge: 5 Historical Dramas To Add To Your Watchlist

Just A Throwback Pic Of Preity Zinta From Her School Days