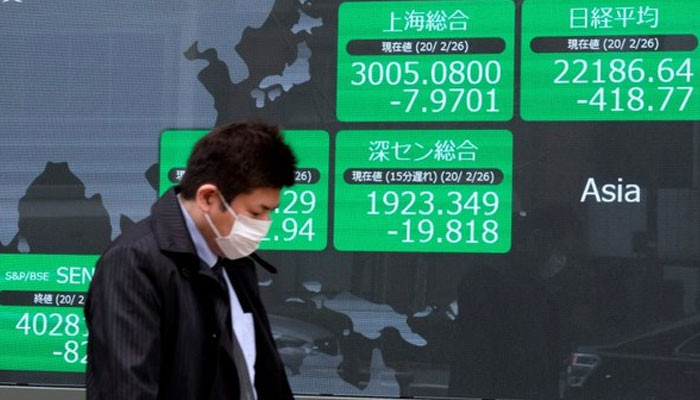 Oil rallied after seeing a sharp drop earlier on reports that OPEC was considering suspending Russia from an output deal, which observers said could allow producers to pump more.

Regional equities have enjoyed a largely healthy run of late on hopes that inflation could be nearing a peak and a sell-off across markets may have run its course, while the easing of some lockdown measures in China added to the optimism.

However, investors were brought down to earth with a bump Tuesday with figures showing eurozone inflation hit a record high in May owing to rocketing energy costs.

The news puts extra pressure on the European Central Bank to act quicker to rein in prices by hiking interest rates along with the Federal Reserve.

There is a fear that acting too late could mean policymakers will have to announce harder, more painful increases later on.

“There are heightened concerns around inflation and where central banks are likely to go trying to combat inflation,” Kristina Hooper, of Invesco Advisers, told Bloomberg Radio.

“This has gone from just an inflation scare to a growth scare. Uncertainty has grown.”

Equity markets were mixed in Asian trade, with traders shrugging off a further easing of lockdown restrictions in China that many hope will give a much-needed boost to the world’s number two economy.

Hong Kong and Shanghai slipped along with Taipei, Bangkok, Mumbai and Manila, though Tokyo, Sydney, Singapore and Wellington rose. London fell in early trade but Paris and Frankfurt were in the green.

“After this brief euphoria stock prices are again vulnerable to a mass ‘get-out’ frenzy as the reality of the already in full swing global slow-down accompanied by ever-higher interest rates begin to take their toll,” he said in a commentary.

Oil prices struggled to rebound after falling more than 4% late Tuesday in reaction to a Wall Street Journal report that OPEC was considering removing Russia from an agreement that has locked producers into limited output increases.

Moscow’s removal would mean an early end to the pact and allow major crude nations such as Saudi Arabia to open the taps, analysts said.

“If there’s any confirmation from OPEC+ members that the absence of Russia is being discussed, then prices can drop to as low as $100,” said Will Sungchil Yun, at VI Investment Corp.

“There’s a need for OPEC+ to come up with a plan, as oil prices are likely to keep surging and boost inflationary pressure.”

Matthew Simpson of StoneX Financial said that it was debatable whether such a move would offset a partial European Union embargo on Russia and the expected pick-up in Chinese demand as lockdowns are eased.

But he added that “it can also be argued that much of the drivers behind oil’s recent rally has been priced in. Regardless, we can see that some wind has been taken out of the oil rally sails”.

Key figures at around 0810 GMT

BLACKPINK Jennie gets candid on the best industry advice she got

Here are the main takeaways from the Jan. 6 Capitol riot committee’s second hearing

5 Signs You Might Be Too Empathetic For Your Own Good

Watch: US Man Bungee Jumps From 198 Ft For A Donut; Sets Record