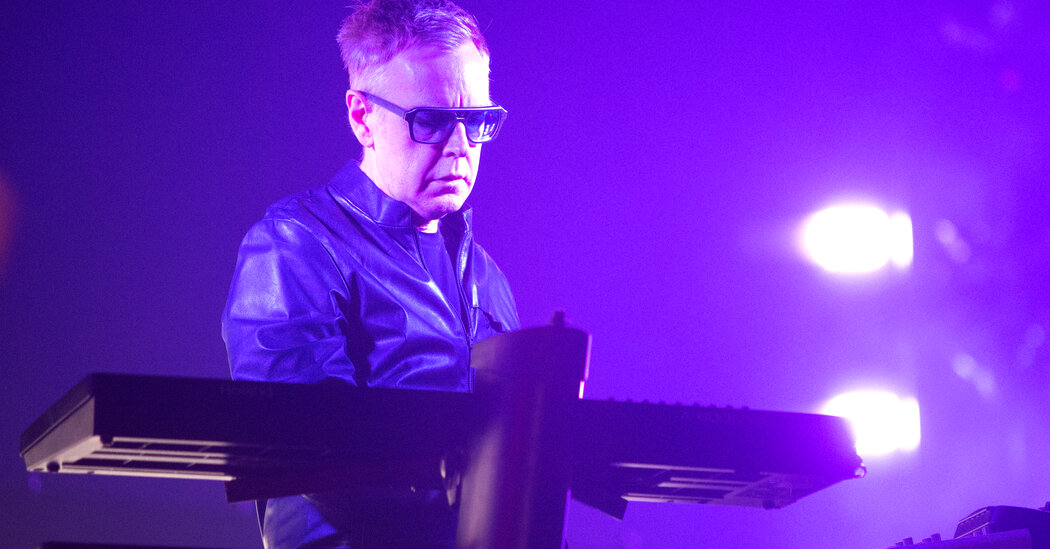 Singer KK dies of sudden heart attack: Why is it hard to detect heart attacks? Things you need to know – Times of India

Andy Fletcher, who played synthesizers in Depeche Mode, the electronics-heavy British band that developed a huge fan following and sold millions of records in the 1980s and ’90s, has died. He was 60.

The band announced his death on Thursday on Twitter. The announcement did not specify where he died or give a cause. An unidentified source close to the band told The Associated Press that he died on Thursday at his home in Britain.

Mr. Fletcher formed Depeche Mode in 1980 in Basildon, east of London, with his fellow synthesizer players Vince Clarke and Martin Gore and the vocalist Dave Gahan. Mr. Clarke left after the group’s first album, “Speak & Spell,” was released in 1981, Alan Wilder filled the spot, and Mr. Gore took over from Mr. Clarke as the group’s main songwriter. The band started to veer away from pop and toward the darker, more serious music that it rode to worldwide fame over the next two decades.

Critics at first often didn’t fully appreciate the appeal of the synthesizer-dominated act.

“Consisting of four young men, three synthesizers and a tape recorder playing prerecorded rhythm tracks, Depeche Mode makes gloomy merry-go-round music with a danceable beat,” Stephen Holden wrote in an unenthusiastic review in The New York Times of a 1982 performance at the Ritz in New York.

Fans, though, latched on, and by the end of the 1990s the group had landed dozens of singles on the British charts — “People Are People” (1984) and “Personal Jesus” (1989) were among the more successful, also charting in the United States — and it was filling big arenas.

Onstage, Mr. Fletcher was the least flashy member of the group. And he was self-deprecating about his role.

But Michael Pagnotta, a SiriusXM Volume host who for much of the 1990s was the band’s publicist, said that offstage, Mr. Fletcher was the glue that held the band together, eager to promote it, keeping track of business and financial matters and often serving as the first point of contact when a tour brought it to a new city.

“Andy Fletcher was the heart of Depeche Mode,” Mr. Pagnotta said in a statement. “A true believer in the band and their music. His keen musical and business instincts helped Depeche become one of the most popular and influential bands of their generation and helped carry them all the way to the Rock & Roll Hall of Fame. Not bad for a boy from Basildon.”

That Hall of Fame induction came in 2020, the band having first been nominated in 2017 — a nomination that Mr. Fletcher never expected, since an electronic band didn’t fit the guitar-and-drums model that traditionally defined rock ’n’ roll.

“To be honest, we were surprised,” he said of the initial nomination in a 2017 interview with The Associated Press. “We never aimed to be in it. We think, ‘An electronic band in the rock ’n’ roll hall?’”

Andrew Fletcher was born on July 8, 1961, in Nottingham, England, and, like the band’s other founders, grew up in a working-class family in Basildon. He and Mr. Clarke met when both were in the Boys’ Brigade, a Christian youth organization. They formed a band, Composition of Sound, in 1980 and soon invited another acquaintance, Mr. Gore, to join because, as Mr. Gore put it later, he was “one of the few people in Basildon who had a synthesizer.”

Review: The Inescapable Vibrations of ‘Violet’

Later that year Mr. Gahan joined as featured vocalist, bringing a sense of style and a new name, Depeche Mode. Daniel Miller of Mute Records signed the group, and its popularity began to grow, not only in England but also in East and West Germany and other countries.

“Violator,” one of the band’s most successful albums, came out in 1990, and, riding its popularity, Depeche Mode played Radio City Music Hall in Manhattan the next year.

“The band’s music, made by synthesizers, is loud washes of sound driven by a dance beat,” Peter Watrous wrote in The Times. “Jet engines roar. Cliffs collapse, dams break. An occasional guitar peeps out from behind the wreckage. All is magnified, and the dance beat, occasionally influenced by house music and hip-hop, continues.

“At Radio City, the audience stood during the whole show and constantly had to be kept from dancing in the aisles.”

Mr. Fletcher’s survivors include his wife, Gráinne Mullan, and their children, Megan and Joe.

‘Jaws’ cast: Where are the shark hunters now?

Can Harry Styles’s Music Catch Up to His Fame?

Making Art on Top of the World